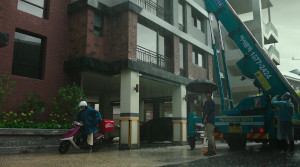 Story: Park Dong-won (Kim Sung-kyun) has finally managed to buy a house. With his wife and young son, he created the domestic happiness he had always dreamed of. If only it weren't for his neighbor Man-soo (Cha Seung-won), who he constantly runs into everywhere and who always scares him for some inexplicable reason. Thanks to his son, Dong-won suddenly notices that something seems to be wrong with the apartment house. The floor is crooked, and he is afraid that the house tilts to one side. Then the water supply also causes some problems. Man-soo tries to take care of it, while Dong-won invites a few work colleagues to come over to his house-warming party. Two of them, Seung-hyeon (Lee Kwang-soo) and Eun-joo (Kim Hye-jun), get so drunk that they have to stay overnight. The next day, the disaster looming at the horizon actually happens. The house gets swallowed up by a sinkhole. The whole building is now 500 meters underground, and the survivors get together to come up with a plan. In the meantime, Dong-won thinks that his wife went shopping with their son and that they are therefore safe, but his son had actually gone back into the building again... In addition, the rescue workers cannot do much, because the constant rain means that the ground could give way at any time and the adjacent building could also fall into the sinkhole. Dong-won and his neighbor Man-soo try to find a way out with the rest of the survivors, but the odds seem to be stacked against them. 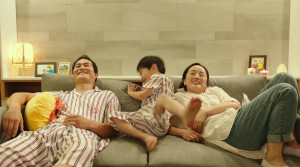 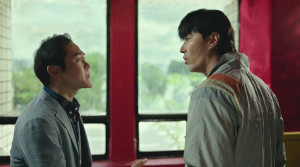 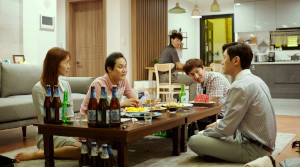 Review: The disaster movie genre is certainly no new territory for Korea. Movies like "Pandora" or "Tunnel" were pretty well-done. Nine years after his own disaster movie "The Tower", director Kim Ji-hoon now once more devoted himself to the genre. Generally, you would have to ask yourself whether you really need another flick of a genre in which, apart from the entertainment value, there is not that much left to get out of, but "Sinkhole" has two interesting aspects that actually manage to intrigue. On the one hand, the movie is much more humorous than you would expect. Strictly speaking, you could even consider the movie to be a comedy. On the other hand, the director also uses his story to criticize the housing market in Korea. Almost no one can afford an apartment in Seoul anymore, and therefore, new residential buildings are now even built on ground that may not be all too safe. In addition, people prefer to keep quiet about defects in their building or problems in the neighborhood, because otherwise the price of their own property would drop. 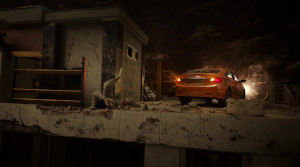 However, what actually drops in "Sinkhole", is an entire building. To see the house drop down hundreds of meters into a hole in the ground is so weird that you just have to enjoy it. So, it's a good thing that this was actually the directors intention too. Unfortunately, it is not that uncommon for movies with premises like that to take themselves all too seriously. However, the tone of this disaster flick remains rather carefree most of the time, and the characters always manage to entertain us with their little quirks. And when you come to think of it, it's actually a pity that there aren't already more movies of this kind that just put a little more humor into the story. Of course, there is still a fight for survival happening in the end, and there are also a few tragic moments. But strictly speaking, this is also one of the movies weaknesses, because it just doesnt work that perfectly. In general, however, director Kim manages quite well to balance struggle for survival and humor. 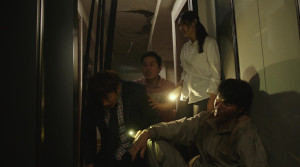 Sadly, the CGI is not always convincing, but since there is some humor to it, you could also consider these scenes to be a little ironic, and then you can forgive a lot. Nevertheless, the sets are very well-done. The jumbled furniture and the various semi-collapsed apartments sometimes make the building look like a labyrinthine Swiss cheese. This turns the set into a small adventure playground where you have to expect the unexpected, like a taxi falling into the living room. Sometimes, the director is also quite creative, and with that, as well as with the rather carefree tone, the movie often manages to remind us of the wonderful "Exit". The pacing may not be quite as high here, but there is always something new happening, and the situations turn out gripping, even though we never seriously believe that one of the protagonists could really die. 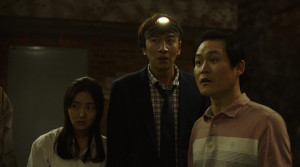 Nevertheless, the movie becomes a bit more serious towards the end, and we even have to deal with a little drama and some death. The fact that no one dies when an entire building drops half a kilometer into the abyss, would probably not have been very believable anyway, but since "Sinkhole" does not aim at being believable at all, the movie maybe would have profited from not including those somewhat more tragic moments and focused on the humor instead. The colorful, even though not greatly-written, characters offer enough moments of entertainment. Kim Sung-kyun ("Golden Slumber") is the official protagonist, a family man with a few quirky edges, but Kim could easily have been upstaged by Lee Kwang-so ("Inseparable Bros") if his character had not been pushed into the background all the time. Cha Seung-won could have befallen the same fate, but his screen presence and comedic timing, which never makes him come across as a caricature though, turn him into the secret star of the movie. This is especially surprising, because most people probably only know him from his gangster roles such as in the movie "Night in Paradise". 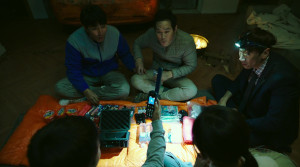 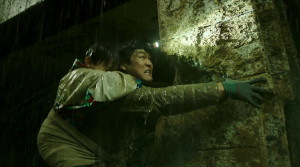 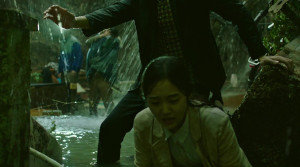 "Sinkhole" is not a great movie in the classical sense, as it has some rough edges. But that's actually what makes it so approachable. The mixture of disaster movie and comedy works amazingly well, and you just feel nicely entertained most of the time. The characters somehow grow on you, even if they could have been written a little better. In the end, you can just see that the actors had a lot of fun shooting the movie. As a result, the flick has its own dynamic and a special charm to it. Adding a little social criticism was not a bad idea of director Kim Ji-hoon either. Besides, the somewhat unusual natural disaster leaves room for some innovative action scenes and sets. All in all, thats why "Sinkhole" is a lot more entertaining than you would expect it to be at first glance.