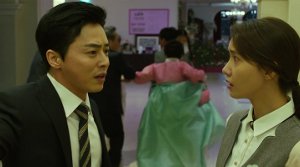 Story: Yong-nam (Jo Jung-suk) is a young, unemployed man living at his parent's. His siblings think of him as a slacker and they also think poorly of his hobby: climbing. When his mother Hyeon-ok (Go Doo-shim) celebrates her 70th birthday, the family comes together in a party room of a multistory building. Yong-nam chose the location because his friend Eui-joo (Im Yoon-ah) works there. He hasn't had contact with her for years, after she didn't reciprocate his love confession. During the party, however, there is a terror attack in the city. Poison gas is released which is supposed to have a lethal effect within a short amount of time. Citizens are told to flee to the rooftops of multistory buildings so that they can be saved by helicopters. The problem for Yong-nam and his family is that the door to their roof is locked. The key for the door is on the first floor, and the poison gas has already spread there. Then, Yong-nam has an idea. He wants to climb through a window and up the outer facade of the building until he reaches the rooftop and manages to open the door for the rest of the group from the outside. His family thinks he is crazy, but Eui-joo, who used to go climbing with him, thinks that this is their best chance, too. The lethal gas cloud does not only spread in the city but also keeps rising. All the while, scientists desperately search for a possibility to neutralize the poison. For Yong-nam and his family as well as Eui-joo a race against time begins, because if they don't make it to the rooftop and get rescued in time by a helicopter, the poison gas will soon reach them... 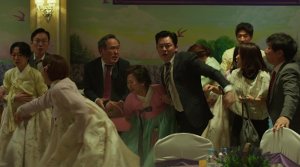 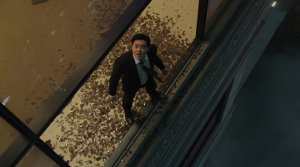 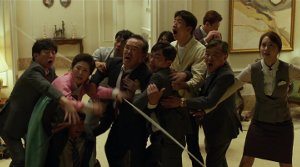 Review: "Exit" is most likely one of the best Korean action comedies of this year, in fact, it is even one of the best Korean movies of this year - period. The reason being that the filmmakers didn't even try to pretend to have a good story, instead they chose to guide us through the disaster movie with a wink all along the way. Everything that comes across a little bit unreasonable is completely fine with us because the only goal the movie has is to be fun to watch, and it achieves its goal. Where else would you get a disaster movie about climbing building facades? This premise also means that we actually get some heart-attack inducing scenes in dizzy height while the extreme suspense is balanced out by a nice sense of humor. In addition, the pacing is brilliant and never gives us time for a breather, at most you get a little break thanks to a comedic scene every now and then. And on top of that, "Exit" is surprisingly innovative! 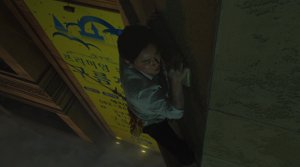 Now, some critics might say that the story is a little bit shallow, but I would say that it actually isn't. Of course, the general concept of a disaster movie is already a given right from the beginning. A catastrophe (duh...), a hero who has to save his and his companions' lives from grave danger and then we get the happy or tragic ending. That doesn't leave much room for anything else, at best a little love story could be squeezed in there. And that's exactly what we get. The journey in this movie is its own reward because the script constantly manages to put some impressively innovative obstacles into our heroes' ways which they manage to overcome in equally innovative ways. Of course, that doesn't mean that the script is free from plot holes, but there is always enough variation for the action to never get boring. In addition, you have to marvel at the fact that director and scriptwriter Lee Sang-geun constantly manages to think of something new to happen. 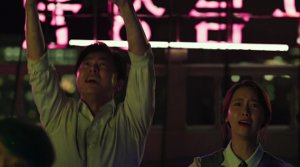 However, the movie starts out pretty slow, or rather the introduction takes its time. But that's not so bad, because the humor manages to draw you into the movie right away. The comedy lives off of its characters and the dynamic of the family at the birthday party. Despite the fact that the characters weren't written especially brilliant, they do have their individual role within the family and this becomes clear quite quickly. Of course, our hero is the black sheep, who still doesn't have a job, lives with his parents, but somehow still manages to get embarrassed by the fact that his family wants to doggy bag leftovers and take them home. In addition, whilst pouring some booze, he cuts the elderly guests short and tells them he doesn't want to be introduced to women who could be his future wives because he has to find a job first. It can't hurt to have a little bit of background knowledge about Korean culture, otherwise you might miss out on some jokes. However, there is enough cross-cultural humor so that nobody has to feel left out. 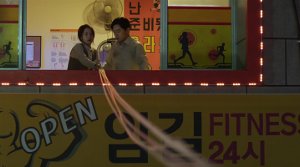 When the catastrophe hits the city, some people are choking and it gets clear that a lot of people die. Yet, we never actually get to see any victims. Probably because that would have affected the light-hearted tone of the movie. Therefore, everything points at a comedy at first, until Yong-nam decides to climb up a few stories on a building facade to get to the roof. It's not for the faint-hearted, especially when he has to cut the safety rope at some point. Suddenly, "Exit" does not only score with its humor, but also its suspense. And from this point onward the suspense is the movie's center. Sometimes, the crazy sets give the impression that the moviemakers took video games like "Uncharted" or "Tomb Raider" as reference material and wanted to show that climbing is actually not as easy and does not go as smoothly as portrayed in this medium. Everything is life-threatening and exhausting and to actually be able to capture this on screen is a big accomplishment, because if the director hadn't shown an eye for those climbing scenes, the suspense would have completely fizzled out. But the way it is, we are constantly at the edge of our seats and some scenes make us even hold our breath. 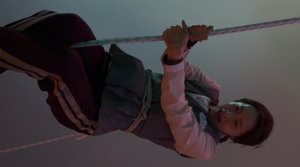 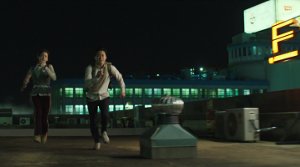 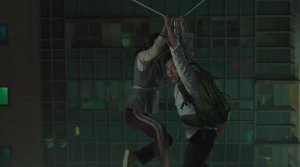 If there is one thing to criticize, though, it would be the fact that there is a little too much over-acting happening. Actor Jo Jung-suk ("Hit-and-Run-Squad") is no rookie in this area. It is pretty funny when he constantly cracks and curses his life, but it is also somewhat over-the-top. Im Yoon-ah (Yoona of the girl band Girls' Generation) gives her debut performance here, but remains rather flat. Nevertheless, the action brings the two protagonists together and Eui-joo proves herself to be as capable as the male hero of the story. Despite the fact that the chemistry between the two could have been fleshed out a little more, it is still enough to make us root for them at all times. In addition to the innovative action, all the thrill, the well-done humor and the brilliant pacing, director Lee Sang-geun also knows how to subtly dig at new media with his debut work. All this adds up to an entertaining disaster comedy movie which can be enjoyed by all age groups.