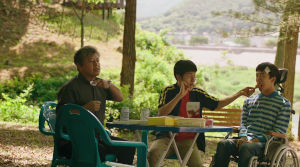 Story: Se-ha (Shin Ha-kyun) is paralyzed from the neck down and has been living in a house for disabled children since his mother died. As a boy, he meets the intellectually challenged Dong-goo (Lee Kwang-soo) there, who was abandoned by his mother as a child. After Se-ha tried to commit suicide and Dong-goo saved him, the two are an inseparable team. Dong-goo takes care of Se-ha in all hands-on matters while Se-ha takes care of all thinking matters. After the priest, who was the head of the house, died, money slowly runs out. Se-ha has an idea and sells certificates for allegedly served social hours. But even the money they make with that is nowhere near enough. When they visit an indoor swimming pool - Dong-woo loves to swim  they find out that there is a small contest in which you can win some money. Dong-woo bursts in on the competition and impresses the attendees with his swimming skills. The swimming coach Mi-hyeon (Esom) gets fired because of the incident, but since it would look good on her CV to have trained a disabled person, Se-ha manages to persuade her to teach Dong-goo professional swimming. All the efforts seem to be in vain, though, as the house, in which the disabled people have grown into a family since their childhood, is supposed to be demolished. The residents will be sent to different shelters, and Se-ha is also supposed to be separated from Dong-goo. Se-ha slowly runs out of ideas, then suddenly Dong-goo's mother turns up, too... 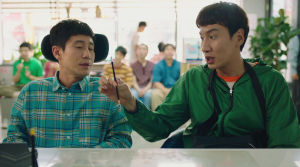 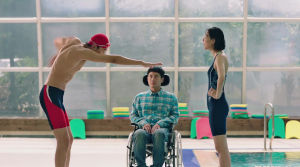 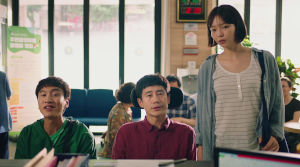 Review: "Inseparable Bros" sets out to do a lot of things. The comedy-drama consists of different story parts, all of which are well-intertwined, and yet they all have the same thing at the center - two friends who are in a symbiotic relationship and understand each other in their own way, despite all the unfavorable circumstances. In good times as in bad. These are the words of the priest at a wedding explaining how love could fade away but wont if you accept the other persons weaknesses. This is actually not meant for the newly-weds, but rather for Se-ha and Dong-goo. The movie always walks a thin line between being cheesy and charming, but in the end, it always finds its balance, and the flick moves towards its finale with somewhat astonishing ease, which is by no means surprising, but still extremely satisfying. This is mainly thanks to the lovable characters. 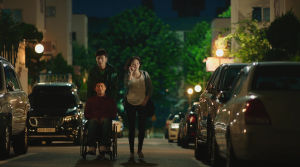 Right from the start, it becomes clear that Se-ha does not have an easy life. He is bound to a wheelchair and is always dependent on someone else helping him. When he is a teenager, he doesn't want to keep on living, but Dong-goo prevents him from committing suicide. This is the moment when an unusual friendship develops between the two. Dong-goo helps Se-ha without expecting anything in return, which is also due to his childlike intellect. At the same time, his intellect leads to some very funny scenes too, such as the one in which he almost eats up the entire ramen, because he keeps testing it, and apparently it is still "too hot" for Se-ha. But it's not just Se-ha who gets something out of this relationship, even though some people even accuse him of taking advantage of his intellectually challenged friend. Dong-goo gets a loyal friend who will never leave him, unlike his mother. As the paralytic often says himself, even if he wanted to, he couldnt leave, because Dong-goo has to push him everywhere. But he would also never think of doing something like that either. 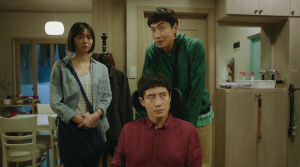 However, Se-ha is a grumpy, sometimes even quite shifty, and definitely not an immediately lovable fella, who shows an unusual patience exclusively towards his friend. Towards others, he is harsh and direct, and he even has a certain criminal energy to him. But at the end of the day, he is not acting selfishly. Shin Ha-kyun ("Running Man") is excellent in the role and he creates a special, deep chemistry with Lee Kwang-soo ("Accidental Detective 2"), who plays the mentally handicapped Dong-goo utterly convincingly. It is the relationship between the two protagonists that grounds the movie and lifts it far beyond its otherwise rather hackneyed story. In addition, a lot of things happen, too. "Inseparable Bros" is a number of movies all at once: a sports movie, a family drama, when the mother returns, and even a courtroom drama, when it needs to be decided who is allowed to take care of Dong-goo in the future. This keeps the pacing pleasantly high and always makes new situations appear on the screen. 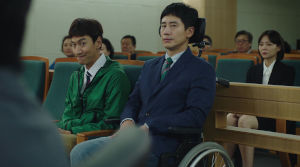 The supporting characters are also surprisingly good. There is Mi-hyeon, embodied by Esom ("Scarlet Innocence"), who represents an outsiders view, and even though she first didnt like Se-ha all that much, she then befriends the two, because she just feels comfortable with them. In fact, there's not really one bad person in the movie. The mother, who left Dong-goo, cannot possibly win our favor, but over time, we realize that she too suffers greatly from what she has done. Director and screenwriter Yook Sang-hyo never tries to force the audience to like a character like that, which is why we learn to accept them, and refrain from thinking in black and white. This applies to many more characters. In the end, however, the two brothers seem to cause that their fellow human beings want to become better individuals. Just by the two friends being who they are. Two disabled men, who make others reflect just by being honest, which may sometimes come across as mean or naive. 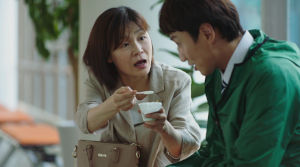 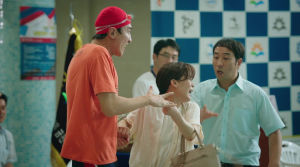 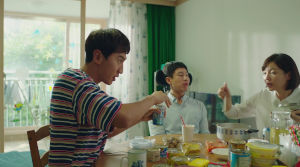 Here and there, we get to see some moments that are almost too cheesy, but Dong-goo with his childish naivety, manages to refute this criticism. He just says what he thinks, and even for Se-ha it is not always easy to know what he understands and what he doesn't. But in the end, one of the most dramatic twists only happens because he has a better grasp on his environment than others give him credit for. At the same time, this also leads to some very funny scenes. "Inseparable Bros" has some weird scenes ready for you, which will certainly make you laugh out loud. This is a good counterbalance to the dramatic scenes, and generally, the movie does not overdo it with its sadder moments. After all, there is no need to fear a tragic outcome. Up until the end of the movie, director Yook always stays true to his tone, which leaves you with one crying and one laughing eye, but with a clear tendency to the latter. Therefore, he managed to put one of the best Korean genre mixes of recent years on the screen.