Story: It is Christmas Eve and at the luxurious Tower Sky a Christmas party of huge proportions is to be held. Responsible for the preparations and security issues is manager Lee Dae-ho (Kim Sang-kyung), who has also brought his little daughter Ha-na (Jo Min-ah) into the tower in order to celebrate Christmas after finishing his job. However, he is still up to his ears in preparations and dangerous security issues like a faulty sprinkler system pose problems. Also having her hands full with work is Seo Yoon-hee (Son Ye-jin), a restaurant manager, who Dae-ho soon wants to confess his feelings to. However, during the opening show of the party a helicopter suddenly crashes into the tower because of updraft and a fire runs rampant that nothing can stop since the sprinkler system isn't working. Firefighter Kang Young-ki (Sol Kyung-gu), who actually has his day off, enters the tower with his men, among them his right hand Byung-man (Kim In-kwon) and rookie Seon-woo (Do Ji-han), to save the people trapped by the fire. A fight for survival begins...

Review: With "The Tower" South Korea brings to screen a visually impressive remake of the American 70s disaster movie "Towering Inferno" and aims at winning over the international audience's favor. And it surely will succeed in doing so as the film is actionloaden and full of great special effects that are second to none. A movie buff of more challenging works, though, will constantly have to shake his head about the fact that almost any cliché that seemingly needs to be put in such a film is actually made use of. Accordingly, the screenplay will often make you slap your forehead. However, those who can live with that and simply want to be entertained well for a change will have made the right choice with "The Tower". 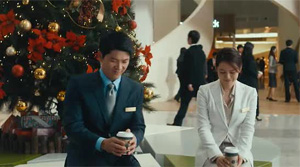 Kim Ji-hoon already managed to win laurels from critics for his work "May 18", but his monster film "Sector 7" was a disappointing special effects ride. "The Tower" is to be located somewhere in between. Even though merely popcorn entertainment, Kim is at least doing most things right in that respect. Surprisingly you can warm to some of the characters despite them mostly being drawn rather shallow, which all in all makes the movie more captivating as a whole. Yet, that is relativized by scenes of benumbing stupidity which make you wish for some of the characters' to meet their demise. Is there really a reason to mindlessly stand around in fear when a small sprint could save your life? Why do people think it would be a good idea to crowd in front of the elevators as if their survival depends on it when a giant fire has broken loose and numerous warnings have been given not to use the elevators no matter what? Furthermore, when things get really precarious no one seems to remember that there is a radio at disposal, which could make the coordination of some of the rescue missions a lot easier... 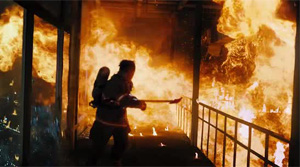 It's pathetic how stupid some of the individuals behave just to cause some absurd coincidences that raise the tension level some more. Moreover, some of the characters stand as archetypes of which we know right from the start whether they survive or not. Especially Sol Kyung-gu ( "No Mercy") doesn't escape that fate. Only towards the end, during an unexpected emotional release, he is allowed to breathe more life into his character in just a single minute than he could in the whole rest of the film. The strengths of actresses like Son Ye-jin ("Spellbound") or many supporting actors, among them Ahn Sung-ki, aren't really made use of either. Oddly enough, Kim Sang-kyung ("Memories of Murder") manages to score greatly in his role, though. He serves as the emotional link between the film and the viewer.

Of course a movie like this can't go without the typical introduction, in which the different characters are introduced in an at times wired fashion. There is also the mandatory laughingstock, who unfortunately isn't funny at all - and of all people he is one of the survivors! No, this surely wasn't some kind of spoiler... Despite the lack of character elaboration we can actually tell apart many individuals and we at least have some kind of image of them. For this the director deserves some kudos. Yet, he doesn't derserve them for the aforementioned clichés of which especially towards the end one is made use of that almost gives you a headache. Not to mention last-minute plans whose realisation no one could survive. The elevated portayal of the firefighters as heroes on the other hand was actually intended as director Kim wanted to remind us of the firefighters of 09/11. And that's not the only parallel to the terrorist attacks that can be found in the film. 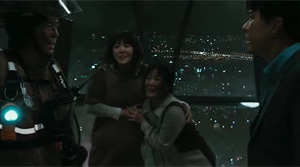 The list of flaws is outweighed quite a lot by the action, though. The special effects are phenomenal and even in HD they don't lose any of their credibility. Allegedly, post-production has almost took up two years but it really was worth it. The fire looks extremely realistic and the action comes to life with a big bang at all times thanks to fantastically staged sets. Especially the fact that CGI-effects have been combined with old school special effects pays off. Contrary to South Korean disaster movies like "Haeundae" there is more right in "The Tower" than wrong and so it can be recommended to anyone who has a liking to special effects and well staged action. It doesn't always need to be profound movies after all, does it?