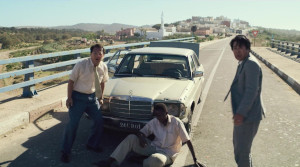 Story: In 1990 South and North Korea work hard to get a seat in the UN. To achieve this, the votes of Africa are very important for the countries. Han Sin-seong (Kim Yun-seok) is an ambassador in Mogadishu and wants to ensure Somalia's vote for South Korea. Kang Dae-jin (Jo In-sung), who previously worked for the secret service and has now been demoted, brings some gifts for the Somali president, and is supposed to help Han win over the president. However, Han gets attacked and the gifts are stolen. In addition, his car is destroyed, which is why he is late for the meeting with the president. The latter is therefore currently meeting with the North Korean ambassador Rim (Heo Joon-ho). For Han, it is clear that Rim is behind the attack on his car. But shortly afterwards, the already tense situation in the country gets even worse, and the rebels release an official statement saying that the president will be overthrown and anyone who helps him will be considered an enemy of the Somali people. The rebels are already in the streets and trade fire with the military. The situation is chaotic and dangerous. At first, Han and his wife as well as his co-workers want to leave the country, but the borders are already closed everywhere. Finding a way out of Mogadishu seems out of the question, and so they entrench themselves in the embassy. The North Koreans are even worse off, as they are attacked by the rebels and are now wandering the streets with their children. They ask Han to let them into the embassy, but this could lead to wide-ranging political consequences... 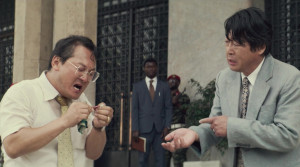 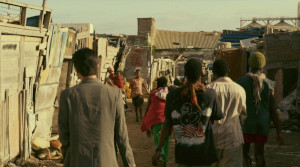 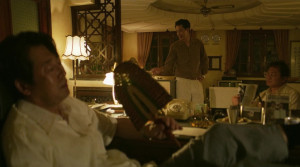 Review: "Escape from Mogadishu" brings a breath of fresh air to Korean cinema. Of course, this is due to the Somali capital as a setting, but also because of the time in which the movie takes place, and the fact that the story is based on true events. Furthermore, the movie succeeds in including the conflict between North and South Korea without feeling like it was rehashing the same old story. Of course, there is also a nice portion of suspense and action. It is therefore no surprise that the movie is the Korean entry at the 2022 Oscars. Director Ryoo Seung-wan can look back on a lot of experience and, especially in the action genre, he has worked himself up to the country's best filmmakers with movies like "Veteran" as well as "The Battleship Island". In his latest movie you can see his good sense of image composition particularly well. 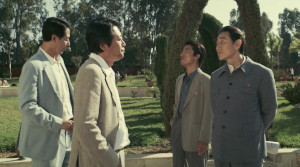 "Escape from Mogadishu" was shot in Morocco, but the dusty streets and the images' yellowish hue immediately make you believe that you are in Somalia. The smoldering heat is also almost physically palpable. As far as the images go, Ryoo did a very good job, because they also make you feel like you are in the middle of the nineties. In addition, the movie maker also creates a dense atmosphere in the capital, which gets overrun by street battles, culminating in gripping suspense. Although the movie is based on true events, we do not learn anything about the parties waging war against each other in Somalia. The civil war is simply a setting in which the story of the North and South Korean ambassadors takes place. On the one hand, this is not a bad thing because the movie sticks to what's important for its premise, but on the other hand, it also makes the flick less complex and you would actually have wanted more information about the political situation in the African country. 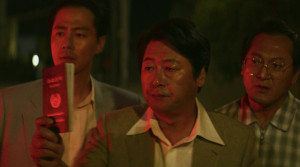 Moreover, the suffering experienced by the country's population is not captured adequately. Showing a corpse on the side of the road every now and then and a few children playing war with machine guns is not enough to do the tragedy that took place in the country justice. However, Ryoo deserves great praise for the scale in which he portrays the civil war. There are countless extras, and the clash between military and rebels takes on almost epic proportions. You wouldn't have expected that of a Korean production. Still, the story is actually centered around the individuals, and here, the conflict between North and South Korea, of course, plays a major role again. Fortunately, the topic is approached a little bit more subtly than a lot of other productions can claim. There is no big drama or patriotic songs sung while people are dying. Overall, the two "factions" also seem a little less indoctrinated than we might be used to. Maybe that's because they are in another country. 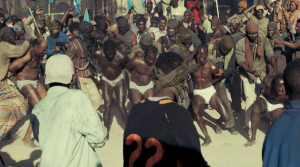 Kim Yun-seok ("The Priests") plays an ambassador who actually deals with things quite coolly, because he knows how political games are played. But he also knows what to do in emergency situations. He is the real hero of the story, and together with the North Korean ambassador, played by Heo Joon-ho ("Default"), he also shows a certain professionalism shaped by life experience, which makes it possible for North and South Korea to help each other out in the first place. Initially, the South Korean ambassador does not want to harbor the North Koreans at all, as this could become the trigger for a strong political conflict at home, but later he even sticks his neck out for them. This is not entirely logical, but you can see that, when they have to face an external life-threatening "enemy", both North and South Koreans return to their roots - and for a short time, they are one nation again. 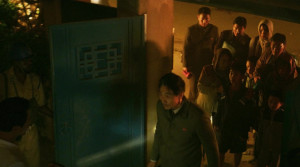 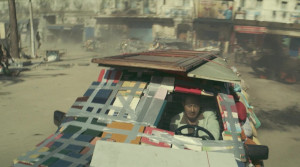 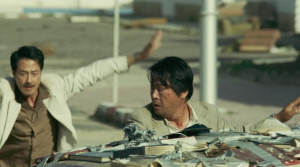 Other supporting actors manage to add some color to the story as well, like Jo In-sung ("A Frozen Flower"), who plays an ex-intelligence officer. Unfortunately, the women in the movie are only used to represent the fashion and hairstyles of the 90s. Of course, Ryoo Seung-wan's strength is his action sequences, and "Escape from Mogadishu" has a very unique escape scene set in the capital, in which a convoy of cars gets shot at from all sides. The fact, that the cars' armoring is made out of books, is just as much a testament to Ryoo's creative talent in action scenes as the beautifully timed escape itself. With the unusual setting, the director shows his effort to not always walk the same terrain, and he actually manages to create an innovative and exciting action flick which just lacks a little bit of political depth.