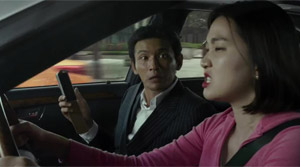 Story: Seol Do-cheol (Hwang Jeong-min) and his team take down a car smuggling ring which is why he and his superior Oh (Oh Dal-soo) can look forward to a promotion very soon. Do-cheol gives family father Bae (Jung Woong-in), who helped him in the case, his card in case he should ever need his help. In fact Bae is in strong need of help since he isn't getting paid by his employer. Do-cheol can't take Bae's call, though, and eventually Bae and his son are taken to Jo Tae-oh (Yoo Ah-in), the son of the company boss, who then makes him fight for his money in a fist combat. Badly injured Bae sends him son home and shortly afterwards he tries to take his life. Do-cheol investigates the case since there are a few oddities. As the detective takes a closer look at the case Tae-oh's right hand man Choi (Yoo Hae-jin) enters the scene. He makes Do-cheol and his wife an offer to put the case to rest and when this doesn't work out Do-cheol's superiors give him another case. But the detective won't be fobbed off with this... 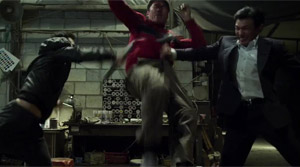 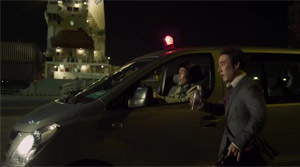 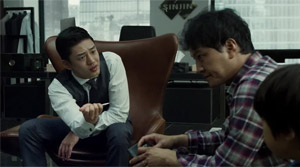 Review: Director Ryoo Seung-wan was most likely as surprised about the enormous success of his action comedy "Veteran" as were all the critics that have kept their eyes peeled for his movies for a long time already. Ryoo is a filmmaker who knows how to convey action in a physically tangible way, the kind of that also defined 80s action cinema. Back when heroes were still bleeding and special effects weren't solely created at a computer. Ryoo delivers exactly this kind of cinema once again and it still is one of his strengths. Apart from that "Veteran" struggles with a few weaknesses, though, like a needlessly long running time and a story that doesn't come with any surprises. As a genre entry this flick may score particularly well with its humor, but why it alsmost developed into a phenomenon in Korea remains a mystery. 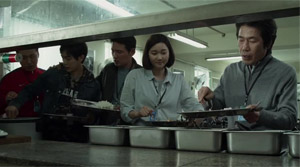 Ryoo Seung-wan is already known among action fans since "Arahan" and "The City of Violence". But mainstream audiences also should have been introduced to the director's work with "The Berlin File". Exceptional stories aren't necessarily the forte of the filmmaker, but the way he conveys action puts him way to the top on the list of best directors of modern Korean cinema. The first few minutes of the movie are proof of that. Hwang Jeong-min ("Ode to My Father", "New World") isn't especially well known for his martial arts abilities, but the fight scenes in the introduction are already breathtaking without any kind of Taewondo or anything the like being used. Instead the protagonists makes good use of his environment and knows how to effectively put his enemies down while also having a fun time doing so. 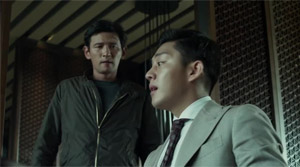 Fun is also the the movie's whole agenda. Several comedic moments never let you question the director's intention to entertain his audience. Some of the gags, like the one when the policemen show each other their injuries, may still be working in a way, but they are dragged on a bit too much. Apart from a very charismatic Hwang Jeong-min it's Oh Dal-soo ("The Attorney", "Miracle in Cell No.7") who manages to stand out the most, who shoulders most of the funny moments and at times even makes the flick a buddy movie. The humor also reminds you of 80s flicks and especially the aforementioned scene during which every one tries to outdo the other with his injury is a clear reference to "Lethal Weapon 3". That aside the movie doesn't really cover itself with glory when it comes to the character elaboration. Yoo Ah-in ("Punch", "Tough as Iron") doesn't truely stand as an original character, portraying the hotheaded, spoiled son of a company boss. 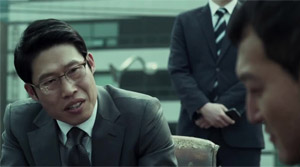 It isn't any different when it comes to the rest of the story. The fight of a small detective facing a giant company while constantly being hindered in his investigation by corrupt superiors is just the umptenth version of a story that shows how money equals influence, power and being untouchable. Especially in Korea. Director and screenwriter Ryoo still tries to place some criticism on the Korean Jaebol system in his work. Family companies have big (political) influence in the country after all. Also, mindless and stupid since constantly cell phone video-making youth is receiving its just deserts during the showdown. However, you shouldn't overinterpret too much into the intentions of "Veteran". In the end, the movie most of all lacks originality concerning its story and especially the introduction, which comes without any real focus, leads us to the question what the movie is actually about. 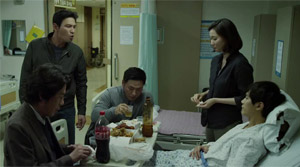 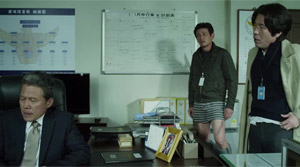 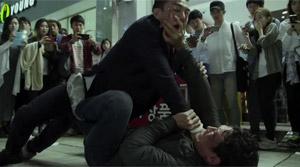 The originality which the screenplay lacks can be found in the action scenes, though. They are very well scattered throughout the movie, yet "Veteran" should have been cut down in a few places. Still, towards the finale the pacing shifts up a gear again and we get a very nice fist fight right in one of Gangnam's shopping alleys. The kinetic energy the action scenes harbor is the effort of a nice cinematography and Ryoo Seung-wan's eye for the essence of what makes good action. The humor also works in favor of the film. Despite all that the question still remains in the end what all the hype around "Veteran" is about. If you have been a victim of this hype you will only be able to regard the movie as a big disappointment. But that's just the fault of critics of which one probably had an especially high opinion of this work and was parroted by others until they somehow whipped each other into a frenzy. Thus, even a sequel is already set in stone. Which tempts you to be particularly strict with "Veteran", but even though this action comedy won't stick with you for long Ryoo Seung-wan simply delivers entertaining action cinema. Nothing more and nothing less.