Story: During Goryeo dynasty in the 14th century the king (Ju Jin-mo) of the country is under enormous pressure. Goryeo is a vassal state of the Chinese Yuan-country which is forcing the king to finally produce a legal heir, otherwise they would install a prince of Yuan as the successor. However, the king isn't capable of sleeping with his queen (Song Ji-hyo) as he is homosexual and in love with the leader of his personal bodyguard unit Hong Lim (Jo In-seong), who has been by his side since childhood days. Nonetheless, as the queen has to get pregnant as soon as possible he asks Hong to spend the night with her. At first, Hong and the Queen aren't really happy about this idea, but they have to obey to their ruler's wish, anyway. After a few nightly meetings the relationship between Hong and the queen starts to shift to a romantic relationship full of lust, which they continue behind the king's back even after he decided that further meetings wouldn't be necessary anymore. Eventually, the king finds out that Hong's feelings aren't directed at him anymore but someone else. At the same time some of his subordinates plot a scheme in order to overthrow him and so the king lets everyone feel at court, who has still the power in his hands...

Review: "A Frozen Flower" is Korea's proof that Koreans are by far not that prudish anymore like they still were a few years ago. Apart from some really hot and explicit sex scenes the likes you haven't seen them in Korean movies before, this costume drama full of lust, violence, betrayal and love more importantly offers a small bed scene between the king and his lover Hong Lim that shocked the audience. Homosexuality is a subject you can actually only talk about for a few years now. "A Frozen Flower" obviously takes a leaf out of "The King and the Clown"'s book in order to tell its extraordinary tale of a love triangle at the royal court and most of all it stands out because of its impressive pictures, sets that show the director's eye for details, fantastic costumes and well-written dialogues. This shouldn't come as a surprise since director Yu Ha had been a poet before he turned to making movies. What's the most apparent, though, is that the story, even though soon looked through concerning its demise, remains thrilling at any time, despite a running time of nearly 140 minutes. 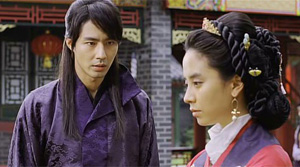 Korea has had some basic problems when it came to producing historical or costume movies that could make me feel the enthusiasm I'm used to get from the Chinese counterparts, which is a reason why I didn't want to find the time to watch "The King and the Clown" yet, but Yu Ha changes that. His chamber play at the royal court oftentimes reminds us of Zhang Yimou's "Curse of the Golden Flower" with its pompous sets, even though Yu's film might take place within a framework that's less epic in scale. The answer to why the colourful costumes and sets can be that fascinating in Yu's work may lie in the fact that they aren't based a hundert percent on what people actually wore at that time, but most of all Yu Ha's great eye for the many small details is responsible for the fantastic look of the movie. At the numerous feasts we are introduced to traditional dances, music and sword performances, which aren't just a pleasure for the eyes, but also make us dive into the film in no time. 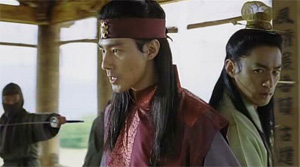 While the already mentioned bed scene between the king and Hong is still rather modest, there is a lot of skin revealed in the numerous sex scenes between Hong and the queen, which is a real surprise. It's not an overstatement to say that these scenes could have been taken out of a softcore porn movie, too. But even though these scenes will become somewhat repititive in tone, they also serve the rise of tension at any time as we feel the catastrophe drawing nearer with every meeting they have. In any case, director Yu deserves some special words of praise for having the courage to implement so much explicit sex into his movie.
Anyway, "The Frozen Flower" also doesn't lack a good amount of violence either. Every now and then the pacing of the movie gets more tight and we are presented with some nicely choreographed sword fighting scenes, whereas the camera doesn't always capture from the right angle what's happening so that we sometimes get the feeling that we might miss one or two things. However, you won't miss the blood spilling all over the screen. Body parts are chopped off, bodies are pierced, people are tortured etc. Nevertheless, the most gruesome scene is one towards the end which will make every man groan in pain...

The fate Yu Ha's protagonists have to endure naturally isn't a pretty one, as we can already foretell after the first meeting between Hong and the queen how things might end. There is always something that's inescapably casting a cloud over the actions of the protagonists and yet the film always manages to keep the tension up. This is mainly thanks to the complexity of the story, which weaves conspiracies at the royal court and some small twists into the apparent drama of the love triangle. Jo In-seong, also main actor of Yu Ha's last film "A Dirty Carnival" proves that he has made gradual progress concerning his acting skills since movies such as "Madeleine" and therefore manages to convince in the complex role of Hong, even though his acting might seem a bit too reserved at some points. Ju Jin-mo ("200 Pounds Beauty", "Wanee and Junah") on the other hand delivers a multi-layered portrayal as the king who becomes a villian because of his feelings towards Hong and manages to provoke feelings of sympathy and hatred of the viewer at the same time. Song Ji-hyo ("Wishing Stairs", "Some") bestows something inscrutable upon on the queen, so that it takes some time for us to figure out if her actions are only the result of lust or if she has actually fallen in love with Hong. 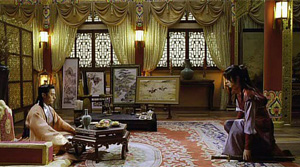 The king introduces Hong to a woman for the first time, and thus he experiences the sort of lust that soon changes into love, something the king didn't calculate in his plans. The queen on the other hand has been neglected by the king for years, so that she starts to develop feelings of love towards this new man, and this of all the other men at court towards the man she actually hated at first, because he more or less took away her husband from her. We have to wonder if Hong was maybe never homosexual and only victim of the king's power as he always had to bow down to the king's wishes (no pun intended). Without spoiling anything you might also want to take into consideration that Hong is maybe just bisexual.

Yu Ha has yet to deliver a bad movie and in some respects "A Frozen Flower" may even be his best movie to date, at least concerning tension and character work. It's not easy to say what's actually the ingredient that's making his films so special, there is just something lyrical in them, which shouldn't surprise anyone considering that Yu Ha was a poet before he became a director, as already stated. "A Frozen Flower" is a wonderfully courageous and complex costume drama which deserves an extra point simply because of the fact that Yu's previous movies all just missed a better rating by inches. But more importantly, this is the first Korean costume film that could win me over. Finally...