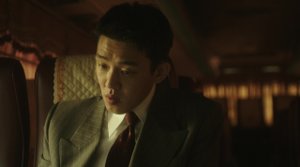 Story: Yoon Jeong-hak (Yoo Ah-in) is a young financial analyst in 1997 and seems to be the only one able to read the signs in Korea correctly. People lose their jobs, both small and midsized businesses have to close up and the currency value is falling. While the government assures the public that Korea's strong economy doesn't have to worry about the Asian financial crisis, Yoon quits his job because he is sure that his country will go bankrupt. Along with some of his investors he plans to make money off of the government's mismanagement.
In the meantime, Gab-soo (Heo Joon-ho) lands a big contract for his company with a department store chain. He is paid with a promissory note, which is customary in Korea, even though he would have preferred to be paid in cash. But suddenly the news reports that the department store chain has gone bankrupt. Gab-soo has already ordered all the material necessary to manufacture the products, though, and now he sits on a huge pile of debt.
Then, the government finally reads the week-old report of the head of monetary policy Han Si-hyeon (Kim Hye-soo), who draws a pretty dark picture of the country's monetary policy. According to her, the country will be bankrupt in about a week. More and more companies, among them rather popular ones, file for bankruptcy, and while the public is still fobbed off with some lies about a temporarily weak economy, there are already negotiations happening with the International Monetary Fund or rather its representative (Vincent Cassel) about a rescue package. Han, on the other hand, warns them that this will destroy Korea's economy and its autonomy for years to come... 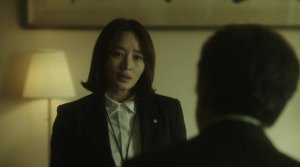 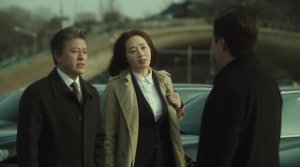 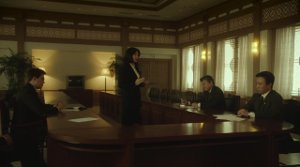 Review: A movie about the 1997 Asian financial crisis does not really promise to be a gripping thriller which leaves you no time to take a breather. But to my surprise, "Default" is exactly that. As somebody who is not really that informed about the financial markets and their backgrounds or is even interested in the topic as such, I had very low expectations. But those kinds of audience members will definitely get their money's worth with "Default", too. Because even if you can't allocate all the different nuances in the background, like the Hanbo scandal, you get introduced to the big picture quite nicely and you can't help but shake your head about the way politicians and banks gambled with the money and future of a whole nation and swept so many of their shortcomings and mistakes under the carpet. Politics are done behind closed doors, the public is lied to and while the ones responsible for all of it walk away without any punishment, simple workers are ruined forever. 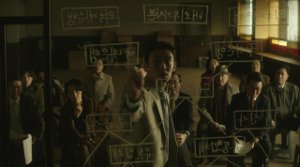 All this is nothing new - cynics might say, that's just how the world goes. But "Default" portrays a picture of Korea which is not at all laudable and shows that this country, which grew so immensely and quickly, still needs to learn a lot. This country is not alone at that, but the nepotism which shows up in form of the Jaebol - major corporations run by family clans - leads to a secret corporation government behind the official government and represents a specific problem of the country. In addition, it is horrifying for the audience to watch with what simplemindedness banks kept lending money. If you want to be honest, nowadays most countries act similarly, but you can't help but gloat to see everything collapse like a house of cards after huge amounts of money were pushed around without any sort of safety net. But unfortunately, it is the lower and middle class which suffer the most. 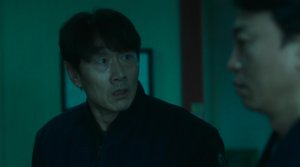 In addition, "Default" is so captivating because of its narrative structure covering three perspectives. Hence, we get to see the big picture through the eyes of Han Si-hyeon, played by Kim Hye-soo ("A Special Lady"), who is very convincing in this role and has a good command of the English language as well, while Gab-soo, portrayed by Heo Joon-ho ("Silmido"), represents the first-hand experience of the effects of the government's decisions. He is the emotional core of the crisis, even though he is not the only one. We also get to see the people around him, employees, creditors, families etc., who get plunged into ruin. What other choice do you have but to think about suicide if all the money you had now lies in front of you in form of a worthless piece of paper? But what stands out the most, is the third story about a financial expert who wants to profit from the crisis. Here, we get to see a fascinating moral ambivalence within the character Yoon, played by Yoo Ah-in ("Burning"). 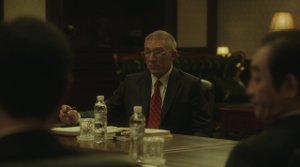 Yoon has some interesting moments. He is able to predict the government's actions to the point, knows about all the lies and every single attempt of manipulation, and therefore he manages to make big money by using a few investors. When he shows them how the Korean economy is constructed, you cannot help but think of a Ponzi scheme. Everybody lives on credit even though money doesn't actually exist. He wants to make money off of the government's stupidity, but does that actually make him a better person or does it simply make him even worse than everybody else, because he uses the public's misfortune for his own good? Director Choi Gook-hee creates some fascinating moments, in which you realize that Yoon himself is disgusted with the situation, but on the other hand, there are also moments where you can clearly see his insensitivity. Or rather, you can see that he doesn't believe in the good in man anymore. This makes him into an honest person, even though he seems shockingly distant when they find a dead person who hung himself in the apartment Yoon just bought. But in other scenes something like a desperate laugh shows you how complex his character actually is. 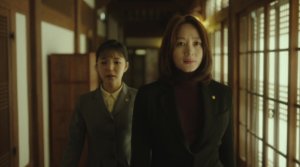 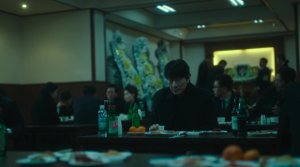 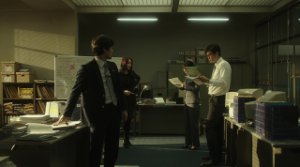 The Korean government is not the only villain, though. The IMF, represented by Vincent Cassel (finally, an international actor in a secondary role that can be taken seriously), makes demands that ultimately turn the country into a vassal state of America (if it hadn't already been one before, anyway). It is unbelievable what kind of cuts the country had/has to put up with and it is almost a miracle that it was actually able to recover again economically. But did Korea learn from its mistakes? As far as the ending of the movie goes, the answer seems to be a clear no. Instead, the director tries to get the point across that blind faith is dangerous and only critical thinking might prevent another financial crisis. Towards the end, "Default" loses itself a little bit in too many potential endings - so that there is even another cut to our present day after we considered the story already to be over -, but up until that point it is definitely impressive with what ease director Choi turns the topic into a gripping and entertaining thriller. One of the best Korean political thrillers in years.