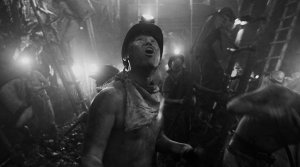 Story: Lee Kang-ok (Hwang Jung-min) is a musician and has to flee his home country Korea with his daughter Soo-hee (Kim Su-an) as he had an affair with a married woman. He decides to go to Japan with his daughter and band since he has a letter of recommendation. However, it's World War II and on the ferry ride he is put into the same room as other Koreans, among them gangster Chil-seong (So Ji-sub), who are being transported to a labor camp. Kang-ok ends up in that camp, too, and has to mine for coal under inhuman working conditions. Somehow, he manages to build a small trade network in that place. Because of this he is approached by Park Moo-yeong (Song Joong-ki) who is an undercover agent of the Korean Liberation Army and has been sent to the mining island to find Yoon Hak-cheol (Lee Kyung-young) and get him to China. In China Yoon is supposed to push the struggle for liberation forward. Kang-ok is tasked to get the key to the telegraph room so that Moo-yeong can sent a message at what time they are ready to be fetched. When Moo-yeong apparently doesn't intend to keep his end of the deal with Kang-ok, who in return for his help wanted to be taken off the island with his daughter, a serious argument starts. But the mutual enemy in the shape of the oppressing Japanese more and more shows its true cruel colors and so the only possibility to get out of the mines alive is to escape the island. 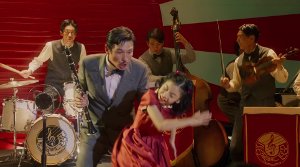 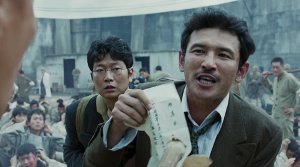 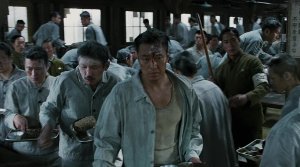 Review: As is generally known war takes many forms. Most of them are cruel: extremely cruel. Director Ryoo Seung-wan has found another way to make us aware of this. Despite a few weaknesses which can't be dismissed his "The Battleship Island" has a spot among my Top 3 best Korean (anti-)war movies, even in close proximity to "The Front Line". The reason for that being the multitude of different aspects of war resp. Japanese occupation of Korea depicted which we haven't seen in this light before, and the spectacular action as well as heroes which actually aren't any. Under the violent surface there is quite some material to reflect on. Next to that the mandatory drama is presented with an unusual moderateness which is exceptionally effective. 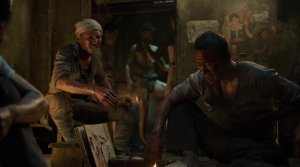 First of all, "The Battleship Island" is actually a mix of a war movie and a prison break flick. After all, the heroes are no soldiers, but coal miners. Director Ryoo ("Veteran") thus shows two extremes of Korean people. One being patriots who are willing to give their lives for independence and the others being those who are so accustomed to life under Japanese rule that they gladly kiss their oppressors' feet. Kang-ok, played by Hwang Jung-min ("The Wailing") is no different in this regard. The heroes of this story aren't any, but are instead only thinking of their own well-being. This also explains why there are so many traitors among Koreans. However, Kang-ok's well-being extends to that of his daughter and this is what makes it so easy for us to relate to him. 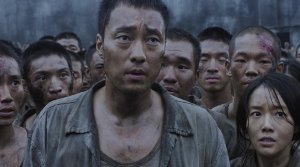 Furthermore, there is also gangster Chil-seong, embodied by So Ji-sub ("A Company Man"), who gets a more human touch by including him in a romance which is hinted at. Song Joong-ki ("A Werewolf Boy") plays the undercover agent without any rough edges. Taking a closer lock the characters lack profound layers, but considering the multitude of story threads between the individuals this isn't truely that surprising. Particularly during the first half you are thus oftentimes asking yourself what story the filmmakers actually want to tell us here or if we are rather just supposed to get an impression of the atrocities committed by the Japanese, including comfort women for the Japanese (and Koreans!) and cruel working conditions as if the Koreans were prisoners of war. But they aren't even that. The Japanese think that those people should count themselves lucky that they are allowed to serve the emperor. 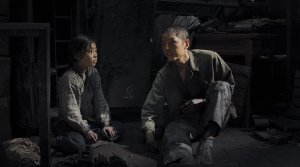 It's no surprise that the Japanese are depicted almost devilish. The accusing look into the camera at the end of the movie and the text informing us that the Japanese government is still denying certain historical facts leave no doubt about who is the villain in this movie. However, during a few moments the Japanese aren't just depicted as the spawn of satan himself, e.g. when a handful of soldiers talk with Kang-ok. Apart from that there are also a few Koreans turning out to be villains and when we see the atomic bomb being dropped over Nagasaki, while one Korean is muttering in despair that his fellow countrymen live there too, America doesn't look that much better either. After all, there is no winner in war, only survivors. It's this very aspect that is reflected in the individuals. You might have your issues with this approach as a viewer, but it's a realistic picture drawn here. 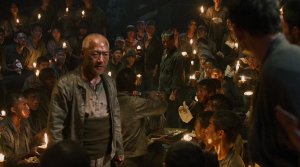 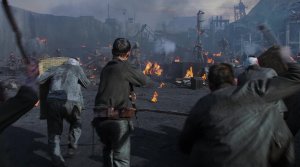 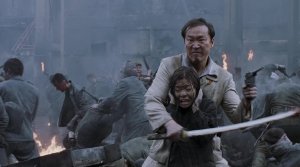 The different story threads which are at first told in a rather unstructured manner are ultimately brought together. And with this the stage is set for one of the greatest action scenes in the war movie genre. The action choreography borders on brilliancy. Everyone has his task and the action never degenerates into a simple firefight on the battlefield. The fantastic camera work, the very well achieved explosions and special effects as well as the elaborate sets all add to this unique showdown. Some critics have noted that the film can get a bit dramatic, but I can't support that at all. Apart from an odd, yet somehow fitting, variation of Ennio Morricone's "The Ecstasy of Gold" Ryoo even refrains from utilizing a histrionic score. Especially in scenes of great emotional weight the score is even completely missing. The second point of criticism I can't agree with is the strong depiction of violence. Ryoo attaches great importance to showing us how people become monsters in war. In this respect the movie doesn't differ that much from most genre entries. The many layers of "The Battleship Island" as well as the superb action can easily wash away any points of criticism, though.