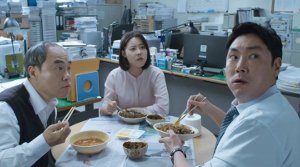 Story: Yang Min-Hyeok (Cho Jin-Woong) is a prosecutor and gets into a lot of trouble when a woman kills herself in her car, because shortly before that, she sent her sister a text message in which she said that she could no longer live with the fact that Yang sexually assaulted her. Yang is about to be suspended due to the accusation, but he has no idea what all this is about and claims to be innocent. Apparently, someone wants to put the blame on him. Some time ago, the same woman had run into some cars on the highway while she was panicking, and so Yang had contact with her as a lawyer. After some research, Yang finds out that she was the main focus in an investigation about the sale of the Daehan Bank, which was about to happen at an unusually low price. Her lover, who convinced her to send important faxes with forged numbers, has already been murdered, too. Yang delves deeper into the case because he wants to clear his name of the sexual assault allegation. During his following investigation, he comes across the lawyer Kim Na-Ri (Lee Ha-Nee), who works for the Daehan Bank. It turns out that it's not just Lee Gwang-joo (Lee Kyung-young), for whom she works directly, who is involved in the case, but the most important men in the financial world have something to do with it as well. Through loopholes and illegal actions, the bank can be sold abroad and then back to Korea. With that they can make billions of dollars. Yang is dealing with a bigger case than he first thought. He is doing everything he can to reveal the scandal. 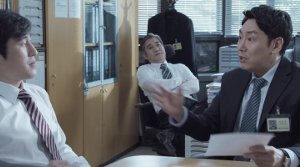 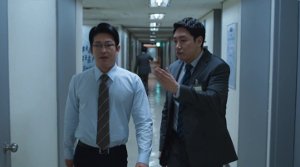 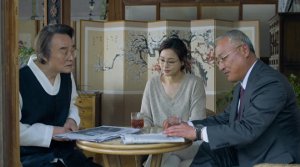 Review: "Black Money" is one of those thrillers that focuses on true financial crises and/or scandals and constructs an exciting story with a lot of artistic freedom. "Default" has already delivered outstanding results in this genre niche, but in this movie, the focus is not on the Asian financial crisis, but rather on the sale of a bank. As we are told at the beginning via text boards on the screen, the movie is based on a true story, but unfortunately, it only scratches the surface of the events. However, this also means that the events are easy to understand, even for those who are not familiar with the financial world. In addition, we get a few charming characters, and just like that, you have an entertaining flick which makes you believe that you have been informed about the injustices within a country about which you thought corruption and nepotism were things of the past. 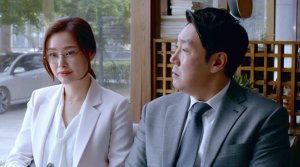 However, a major point of criticism should be mentioned right at the beginning. "Black Money" paints everything pretty much in black and white. This is not supposed to mean that you should put a gloss on the actions of the upper elite in the financial sector, but it is also too simple to portray the bad guys as just that and nothing else. We do not get to see their motives, reasons for their actions or maybe even moral doubts. This also stands out because Na-ri, played by Lee Ha-nee ("Extreme Job"), is stuck in the middle of everything. At least at some point of the story she seems to give our hero a helping hand. Due to the superficial depiction of the bad guys, it is also not surprising that we get to see some faces amongst the supporting roles which we know from Korean cinema and which we mainly associate with corrupt politicians or gangster bosses. Especially with Lee Kyung-young ("Steel Rain") that's a real pity because he's capable of more. 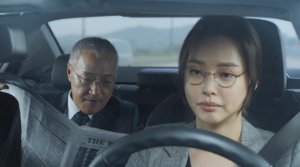 But it is not the criticism of the Korean financial elite and its illegal activities that the movie's beginning focuses on. Instead, it concentrates on the MeToo movement. As is customary in the Twitter era, there are only two extremes and no complex nuances in between. And if someone is merely accused of a crime, that is enough to ruin his/her life. Having a trial, examining evidence and such is unnecessary. What we could/can also observe during the MeToo movement in the West has come to extremes, especially in Korea. Politicians, stars, etc. have to disappear from the public eye, they lose their jobs or just take their own lives, and no one cares whether they were later proven to be innocent. The reputation is ruined and the media will, at best, apologize for everything on one of the last pages. In "Black Money," the hero of the story is accused of sexually assaulting a woman. Because his guilt, apparently, does not have to be proven, he does everything he can to prove his innocence. That's anything but a state of law... 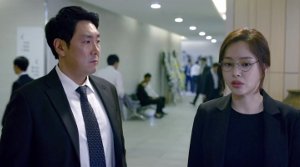 But that sort of injustice is also the foundation on which Min-hyeok's career was built on. Because even though his father was the victim in a particular car accident, he was the one who was put into jail until he passed away, since the other person was the son of a high-ranking politician. So, it is understandable that this injustice has made our hero incorruptible. He has to put things right and change the world for the better. However, he is also a strange guy who doesn't take things too seriously. Cho Jin-woong ("The Spy Gone North") plays his role very likeable and so, he guides us through the story in a pleasant way. A story, of which the director probably thought it could be too complex for the general public. Therefore, important facts are repeated several times, sometimes through flashbacks of events that we have just seen. Instead, it would have been nicer to see how foreign investments of such a scale were possible, and in addition, the movie makers could have covered the role of the US in more depth, and pointed out the decisions that made the Korean market vulnerable to such a fraud. 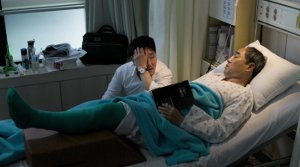 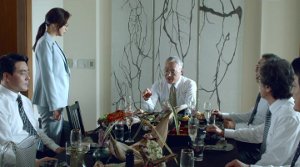 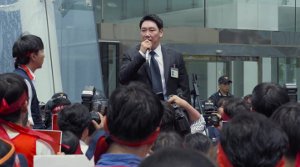 Perhaps that would have made the movie a little too complex for a larger audience, but I had expected more from director Chung Ji-young. His fantastic movie "National Security" managed to arouse a lot of anger about events in Korea's history and this was supposed to replicate those emotions. Unfortunately, the whole thing fizzles out in the end. A lot of things stay too superficial and remind us of a lowbrow drama. If the character drawing had been a little more sophisticated and the exact background of events had been examined in more detail, "Black Money" could have become a movie you don't forget so quickly. In general, the main aim of this movie was to create some suspense, and this becomes all too clear, because at the end of the day, it is just about a dry financial fraud. Director Chung should have trusted the story as a driving force and not put so many deflections in there with all the supposedly great realizations that the hero suddenly has and all the pseudo-action sequences we get. Not a bad drama, but one that turned out too superficial.