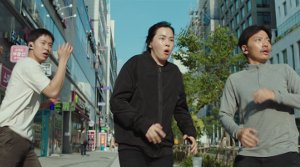 Story: Captain Go (Ryu Seung-ryong) and his anti-narcotics team once more screwed up a case. Their superior is less than thrilled and to top it all off, a younger colleague is promoted before Go, which leaves the captain far from pleased. Eventually, this colleague tells Go about a drug lord, Lee Moo-bae (Shin Ha-kyun), who resurfaced and who the captain could tail if he wanted to finally solve a case again. Go and his team go to work, but the owner of the chicken place, where they wanted to observe Lee's gang from, suddenly sells his restaurant. What's even worse, the gang usually ordered chicken from this place and Go's Team planned on installing cameras at the gang's hideout by dressing up as the restaurant's delivery service. Eventually, somebody suggests to simply buy the restaurant themselves so that they could keep observing the gang. The plan is put into action. The only problem is that, at some point, the team has to stop turning away customers and actually sell chicken if they don't want to blow their cover. Neither the quick-witted detective Jang (Lee Honey) nor the surveillance expert Yong-ho (Lee Dong-hwi) or the rookie Jae-hoon (Gong Myung) know how to prepare fried chicken. Luckily, the family of detective Ma (Jin Seon-kyu) owns a restaurant and the detective learned some tricks there. But the chicken they now sell becomes an insiders' tip and the restaurant gets so crowded that Go's team isn't sure anymore whether they are still working an undercover job or just running a successful restaurant... 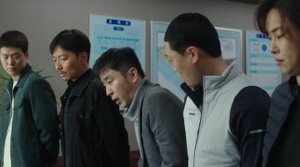 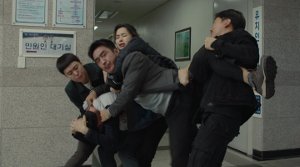 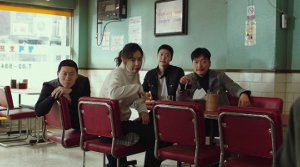 Review: "Extreme Job" was an unexpected success story and such a big hit at the Korean box office that it eventually got to be the second most successful movie of the country. The reasons for that are simple: a charismatic cast, well-written gags and a lot of fun. What's especially noteworthy is the fact that the movie is not a romcom, which is usually the case when it comes to comedies from the country. And strictly speaking, it is not a buddy movie either. Instead it deals with the comradery of an anti-narcotics team, whose members - despite all the shenanigans - take their job seriously. The comedy created by the various situations the team gets itself into is actually not that stupid and instead makes you chuckle or even laugh out loud. At some point, you don't even worry about possible mistakes in the script anymore and just enjoy the ride. 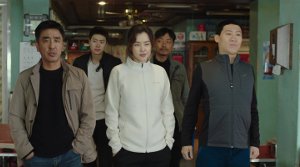 Looking at the summary, you might think that the plot revolves mostly around the restaurant and the success the police have with it. And even though this plot line is in important part of the story, it takes quite some time until we actually get there and after that the investigation comes to the fore again. That's a good thing, though, because this premise alone would not have been enough to base an entire movie on. On the other hand, you might even feel a little bit cheated. But most of the time, the movie avoids overusing certain jokes too much, and overusing is what the director would have had to do if he had focused on the restaurant. This was a good decision by Lee Byeong-heon, who also co-wrote the script and already delivered a nice comedy with "Twenty". He knows that well-written jokes need charismatic characters and he made sure to have those. 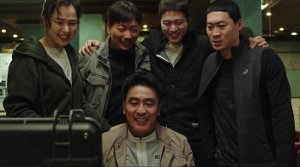 The team around Go goofs around as if they had been friends for years and the chemistry between them simply works. With "Extreme Job" actor Ryu Seung-ryong managed to beat the country's previous most successful comedy, "Miracle in Cell No. 7", in which - interestingly enough - he also played the lead role! You might know him from more subtle roles, so the only thing you could criticize is that his stoic moments sometimes stand too much in contrast to his more playful scenes. However, everybody is upstaged by Jin Seon-kyu anyway, who is mostly known for supporting roles, like the monk in "Svaha". He seems completely incompetent, but soon it turns out that he cannot only cook well, he is also an excellent fighter. In addition, he has a love-hate relationship with a colleague, which fortunately doesn't get turned into a romantic subplot. The rookie, on the other hand, manages to create some funny moments with his unnecessary enthusiasm. 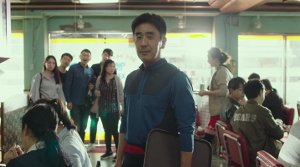 One of those hilarious moments that can give you a good impression of the team's dynamic and their humor is the scene in which the team listens in on the gang when their goons and drug sellers get into a fight. The policemen inevitably root for the drug sellers and complain about the fact that there is no running commentary for the fight. Some humorous scenes probably got lost in translation, but as a whole, there is always something to laugh about, and even on an astonishingly high level of quality. "Extreme Job" definitely thrives on its jokes and punchlines. Unfortunately, they don't really hit the mark during the action sequences. Here, there is sometimes a little bit too much slapstick used. A pleasing aspect, however, is that the director didn't turn Shin Ha-kyun ("The Villainess") as the bad guy into a caricature. Instead, he was written as a nice counterweight to the movie's focus on humor without being portrayed too cruelly. 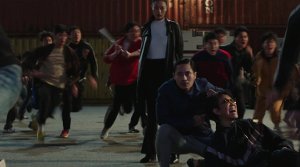 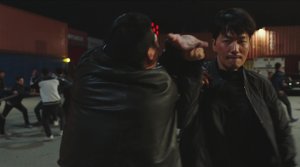 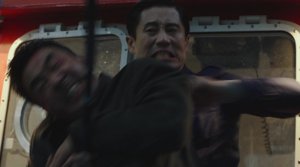 Nevertheless, there is another little point of criticism. Despite a somehow common theme, there comes a point when neither the audience nor the script really knows in which direction the story should go. Everything seems a little bit chaotic or rather without a noticeable direction. This divides the movie and is most probably the result of no less than four script-writers who all wanted to put their ideas into the story. Of course, there also has to be an action-driven finale at the end. Here, the fights range from mediocre to surprisingly good. And it also works out quite nicely how Leslie Cheung's song for "A Better Tomorrow" is featured at the end to make fun of both the finale and the team's brotherhood. And because "Extreme Job" also doesn't end with an embarrassing follow-up the movie, including its numerous well-done punchlines, is quite reminiscent of the oftentimes overlooked "Going by the Book". "Extreme Job" is just the right choice for an entertaining evening.