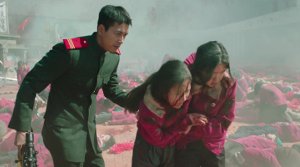 Story: Eom Cheol-woo (Jung Woo-sung) is an agent of the North Korean army who by order of general Lee Tae-han (Kim Kap-soo) tries to prevent a coup which aims at taking out the country's "Number 1". Thus, Eom wants to shoot the politicians planning this. In Kaesong, where Chinese businessmen invest in factories and are present during an opening ceremony, the agent wants to put his plan into action. However, the place is suddenly hit by rockets. Eom manages to save himself, but he finds out that "Number 1" has been present during the opening ceremony and is now badly injured. With the help of two girls who were cheering for their great leader he puts him into a car and takes him to the border. The fleeing Chinese businessmen also wait at the border to be let through. Since the South doesn't want to antagonize China the borders are opened and so Eom succeeds in entering the South as well. Meanwhile in South Korea Kwak Cheol-woo (Kwak Do-won), one of the president's (Kim Eui-sung) consultants, has heard that the head of North Korea has been killed during an attack. The rockets are said to have been American ones, although in fact North Koreans have stolen and fired them in order to shift the blame after the overthrow. Any wrong decision could have far-reaching consequences and while the president considers suprising his enemy with a nuclear first-strike as the government fears to be taken by surprise if the North Korean army attacks by land Kwak finds out that Eom is in the country with "Number 1". Together with Eom he wants to look for a peaceful solution in this deadly conflict... 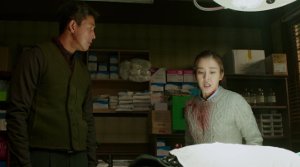 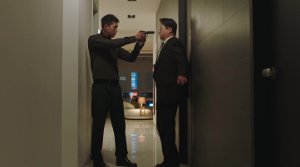 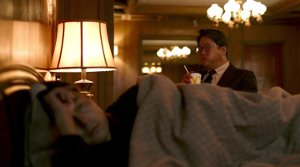 Review: A movie revolving around the tensions between North Korea and the rest of the world, among others the southern neighbor, of course, but particularly the USA, couldn't be any more up-to-date with the current American president and the constant saber-rattling. "Steel Rain" deserves special praise for in parts taking an amazingly realistic look at the worst case scenario and delivering a thrilling as well as sophisticated story around a country at the brink of war. This feels like a throw-back to the cloak-and-dagger genre of the Cold War era and this makes for a good recipe for a tension-filled thriller. Most of the time director Yang Woo-seok ("The Attorney") does everything right, but a shorter running time, a more compact or at least more focused story as well as more time with the odd couple working together on the other hand would have added to the movie in terms of quality even more. 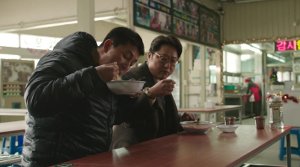 The individual parts of the movie at times feel like episodes of a TV series. One which without a doubt continues telling the same story, yet lays the focus on different aspects. For example, there is the political power struggle in the background, strategic meetings, but also action scenes between North Korean agents and the hero as well as moments of North and South getting to know each other more in the shape of the protagonists. Taken by itself this undoubtfully works well, it's just that the seams oftentimes cause some unnecessary lean periods. Therefore, it also doesn't come as a surprise that "Steel Rain" is based on a web toon of the director himself. However, apart from that there isn't much negative to say. Particularly well done are the scenarios the filmmaker came up with since they are strongly rooted in reality. And along with a good, but thankfully unobtrusive soundtrack this creates quite some tension and adrenaline boosts. 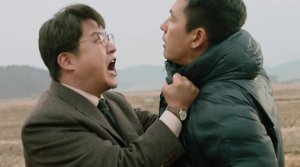 Jung Woo-sung ("The King") delivers a rather shallow performance in his role as a North Korean spy. It isn't bad since his dog eyes allow us to believe that he didn't just do what he did because he had only the wellbeing of his country in mind, although he is in fact a slave of his superior up until one point, but there is simply too little background information about his character and the mask he wears is too stiff. At least, he manages to convince during the action scenes since the close-combat sequences are well captured and are particularly aiming at creating tension. Jung is easily ousted by Kwak Do-won ("The Wailing"), though. Kwak plays his role in an extraordinarily likeable manner and he succeeds in portraying a new kind of (action) hero, which maybe fits better into modern times: a diplomat who always keeps a level head and is capable of seeing things from different angles. 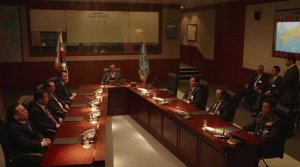 Jung and Kwak have already been in front of the camera for "Asura: The City of Madness". This time they make for a great couple which doesn't fall into the category of so many typical buddy movies, yet despite their differences they develop an understanding for the motives of the other on a more profound level. The scenes between the two stand as the best of the whole movie and so it's incomprehensible why the movie's focus doesn't lie here more often. After all the clichés of the starved North Korean who is equipped with a cellular phone from twenty years ago are checked modern South Korea is also made fun of in the shape of G Dragon from the band "Big Bang", which to a North Korean, and anyone with some taste for at least somewhat true music, can only be called noise. Those moments of self-criticism suit "Steel Rain" well. 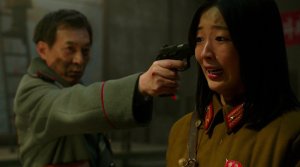 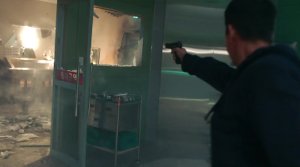 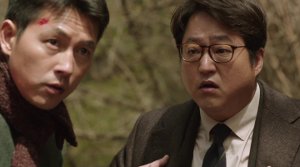 So most of the time Kwak steals the show, only during those moments in which he speaks English things can get cringeworthy, although to his credit it has to be pointed out that even then he remains convincing in his role. This is rare. In order to give the action a more epic scale there are also rocket launches and nice CGI effects. The threat of a nuclear war is always tangible and the political analysis is as thrilling as the close-combat fights. Thus, you can also forgive a few plot holes. Also deservering some praise is that "Steel Rain" doesn't ride on a wave of emotionalism with which a unified Korea is yearned for. That is beneath this movie since the story manages to make you reflect and your heart heavy without a lot of tears. The fact that director Yang walks this moderate path, even though Korean audiences are normally asking for tearjerkers is extremely pleasant. If the individual parts would have fit together more seamlessly and within a shorter running time, the picture even would have deserved a better rating.