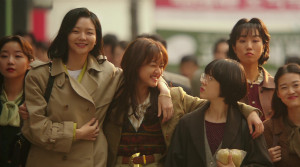 Story: Without Lee Ja-yeong (Go Ah-sung) her colleagues would not be able to find a single file in their department, whereas Jeong Yoo-na (Esom) has a great common knowledge as well as many good ideas, and Sim Bo-ram (Park Hye-soo) is a real math genius. The three have in common that they have been working for Samjin company for eight years now but are still assigned tasks that an intern could easily do. As South Korea starts into a new era of globalization in 1995, the three women decide to learn English and take a TOEIC course. A certificate could pave the way for a better career. One day, however, Ja-yeong has to deal with something at one of the company's factories and she notices that dead fish are floating on the surface of the nearby river. Then she sees with her own eyes how the factory drains sewage into the river. Through a colleague, she arranges that the matter gets looked into. Soon it turns out that the river actually has an increased phenol-level. Residents of the affected small town receive a tiny compensation and are assured that the incident did not affect their health. But with her calculations Bo-ram soon finds out that the official numbers have to be wrong. The three women continue their research and discover that the actual phenol-level is more than 200 times higher, and that the residents living near the factory could suffer from some serious health damages. Apparently, someone at Samjin wants to keep the incident under wraps, but the three colleagues don't give up and try to expose the instigators... 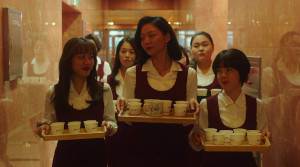 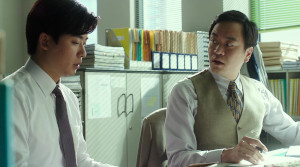 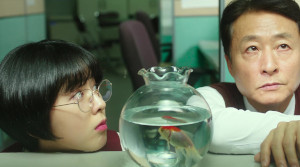 Review: If you are not scared away by the somewhat bulky title, you get to see a nice genre mix with "Samjin Company English Class", a movie which constantly radiates good mood, while being based on a true story. Therefore, we also take a look at how reckless companies can get, when they only focus on profit, and we can see that - if you never give up - even a small cog in a big wheel can stop a corrupt machinery. Since the movie is set in the 90s, there is also a huge nostalgia factor, and we realize that the role of women in a Korean workplace lagged behind that of the western world by a few decades, whatever you might say about still existing inequality. For example, the employed women are mainly responsible for making coffee and getting cigarettes, with one or two exceptions, such as Bo-ram or one team leader. 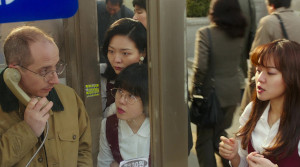 But the 90s were also a time in which Korea was just starting to economically open up to the rest of the world, which means that old role clichés could not yet be related to other ways of thinking and cultures. But it would be an extremely limited view - also because of the exceptions already mentioned - if the problems of the movie's protagonists were just reduced to their roles as women. In Korea, the level of education is very important, and most women only had a high school degree, with which there was little hope of building a career. Today, a university degree is so crucial that you can hardly manage to get a reasonable job in Korea without it. But for our protagonists, an English certificate represents the Holy Grail. Those who can speak English have a clear advantage in a globalized world, and of course, many companies quickly realized this back then. This movie once more shows us what the extent of Koreans and their English language proficiency amount to, though... 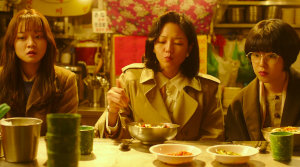 Therefore, the actresses struggle a little bit with the English language, but as is right and proper, there are also a few foreigners who struggle with the acting. So, we have the whole package here. In addition, it is sometimes a little strange what kind of English they learn. Instead of studying sentences that are useful in everyday life, they are taught company slogans. Apart from that, however, we get a nice insight into the pecking order, which is particularly important in Korea, and in which women are, of course, at the very bottom. And if it's not a man who causes problems for a female colleague, it's women who stop other women from climbing the career ladder. All of this is put into a somewhat humorous framework, but at the same time, it paints a clear picture of the corporate culture and the perception of women at the time. However, looking at the movie's sets and its fashion choice, you might often think you are in the 80s, instead of the 90s. 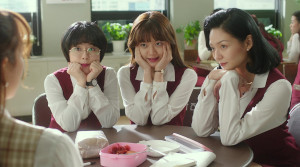 All in all, the 90s are portrayed with great attention to detail, though, and scenes, such as the one where a character constantly has to insert coins in a payphone during an international phone call, are also used reasonably as humorous vehicles. Go Ah-sung ("Thread of Lies") plays the real lead, at least because the role of a female worker who never gives up while facing injustice mainly falls to her. But Esom ("Inseparable Bros") and Park Hye-soo ("Swing Kids") are rarely overshadowed by their fellow actress. They make a wonderful trio, and their roles could not be any more different, but they do not come across as stereotypes either. The chemistry between the three simply works, and so it is mostly thanks to them that the movie is so entertaining. However, there is also a lot happening in this flick. In addition to the strong focus on humor, of course, this movie is also a drama, and it even dabbles in the spy genre, which is quite surprising. 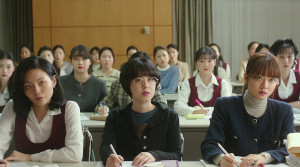 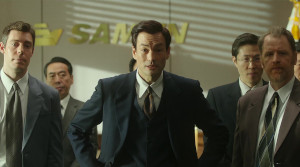 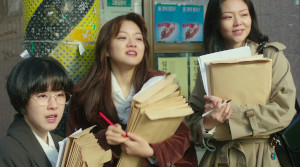 In search for the instigators of the phenol-scandal, we also get one twist after the other. Some scenes seem as if they came straight out of a spy thriller, and the director doesn't forget to comment on it with a wink. This is pretty appealing and keeps both the pace and the level of humor up. But what is striking about the second half of the movie, is how the director leaves the door open for different directions. And he actually tries to head into most of them. Therefore, the movie gets a bit cluttered towards the end. What is worse, though, is the fact that the David-versus-Goliath storyline gets too hackneyed and cheesy towards the finale, so that it even becomes hardly bearable. Creating a good mood is one thing, but the flick's last fifteen minutes almost spoil the entire movie. If the director had dialed down the "Never give up!"-parole a notch, you could have easily recommended "Samjin Company English Class". But as it is, you simply have to deal with a strenuous ending for an otherwise pretty good movie.