Story: Hyun-sook (Kim Hee-ae) is a single mother, who apparently leads a happy life with her two daughters. While her oldest daughter Man-ji (Ko Ah-seong) doesn't miss any chance to nag, 14-year old Cheon-ji (Kim Hyang-ki) is a nice girl and always in a good mood. Then, Cheon-ji commits suicide. Hyun-sook and Man-ji move into a new apartment and try to somehow continue their lives. But Man-ji can't find any peace until she has found out, what drove her sister into committing suicide. At school she does some research and finds out that her sister has been bullied. The one who made her life the worst was her supposed friend Hwa-yeon (Kim Yoo-jeong). However, Man-ji and her mother slowly start to realize that Cheon-ji sent some cries for help before her suicide which haven't been recognized as such by her family. Hyun-sook and Man-ji continue looking for someone to blame for Cheon-ji's death, but things turn out not to be that simple...

Review: Bullying at school is something you will find at every school in every country in the world. But especially for South Korea it is a topic that the government should tackle as the country by far spearheads the list of suicides among the OECD member states. A subject that needs to be dealt with in a serious way. And that's what's done in "Thread of Lies", a complex drama, that looks into bullying from different angles and does so with sensitiveness and a great sense for cinematic adaptation. The fantastic acting achievements also add to the story very nicely, a story in which the drama is conveyed as a mystery case that slowly needs to be unravelled and in that process remains realistic at all times, without doing any misstep in easily implementable sob-stuff. 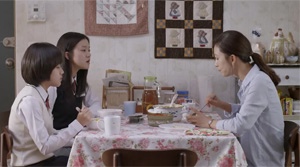 With "Thread of Lies" director Lee Han once again, as with his last work "Punch", adapts a novel by Kim Ryeo-ryeong for the big screen and he again proves to have an eye for the subtleties of characters and the drama that revolves around them. The complexity of the story has its origin in the vividness of the different individuals, of which every single one is guilt-ridden in its own way and has to cope with it. The sudden death of the schoolgirl is at first met with sorrow, of course, but it isn't met with the amount of tears that actually would seem appropriate. By that the director just proves his keen sense for the real drama in life, because the hole Cheon-ji leaves behind can only be felt slowly as time progresses in order not to suddenly be broken by the pain of loss. 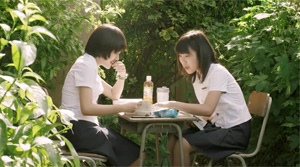 While the mother at first simply tries to continue living as before, the suicide's sister turns out to be a real investigator and interrogates everyone who might have known Cheon-ji. Soon the scale of the bullying the girl had to endure is uncovered. What's distressing is that Cheon-ji has been driven into suicide by perfidious psychological means that reflect the dynamics of a girls' clique. Even more gruesome and grueling than obvious bullying is subtly being worn down, and that's just what the schoolgirl experienced. "Thread of Lies" is also exciting to watch as new revelations about the individuals and their motives, which are linked to Cheon-ji, are constantly introduced. This makes the story quite complex, yet the movie is comprehensible at all times, as well. Also responsible for that are the fantastically fleshed out characters.

Driving force behind the movie is Ko Ah-seong ("Snowpiercer", "The Host"), who despite her 21 years blends in perfectly with the mostly very young cast. Kim Hyang-ki ("A Werewolf Boy", "Wedding Dress") convinces as a girl suffering from depression who can't show her true problems to anyone, but the most complex of the characters is maybe Hwa-yeon, also played brilliantly by Kim Yoo-jeong ("Commitment"), who consequently portrays the culprit and therefore the villain of the story, you might think. But she doesn't. After the sorrow comes the search for someone to blame and eventually the anger on the culprit, but "Thread of Lies" doesn't take this easy road and instead draws a picture in which good and evil amalgamate in shades of grey. However, despite the very good tackling of the subject there is no wagging a finger. It's almost as if the narrator wants to remain impartial at all costs and the recipient has to decide himself what he wants to think. This is one of the biggest strengths of writer Kim Ryeo-ryeong which has been carried over into the film very well. 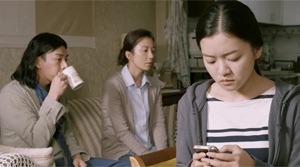 What's also impressive is the number of subplots that have found their way into the movie. Moreover, none of the subplots is neglectable for the big picture, which maybe could be cited as a negative aspect since this creates a certain constructedness after all. Yet, there is perfect balance between the individual plot threads and they all lead to one red thread going through the whole movie. What's also unusual is that despite its very serious topic there are also some nice humoristic moments to be found, especially those featuring Yoo Ah-in, who in a nice reference hints at his role in "Punch". But that's not really a surprise, because despite some inevitably tear-loaden moments the story breaks with conventions and clichés and calls our attention to social evils by approaching it in a very subtle manner. The oftentimes light-flooded sets once more underline that "Thread of Lies" is a drama that in the end treasures a ray of hope at the horizon and wants to be an ode to life.