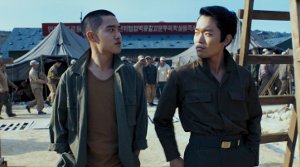 Story: It's the year 1951 and war rages in Korea. The North and South lead a fierce battle against each other, supported by China and America, respectively. In a prisoner of war camp of the South, the communist Ro Gi-soo (Do Kyung-soo) is held captive. He is the brother of a war hero from the North. There are constant riots in the camp, but the military leadership tries to follow the Geneva Convention while also ensuring comfortable living conditions for the prisoners. The intention behind it is to convert the communists to capitalists. So far, Ro Gi-soo stayed true to his ideology, but he is put to an acid test when he watches the black G.I. Jackson (Jared Grimes) tap dancing and is completely captivated by the dance's magic. Eventually, the camp's warden (Ross Kettle) instructs Jackson to put together a dance group and prepare a performance in order to convince the international press of the camp's faultlessness. Jackson organizes a casting and in the end, he lets the traditional dancer Byeong-sam (Oh Jung-se) and the Chinese prisoner Xiaofang (Kim Min-ho) join the group. Giving a helping hand is Pan-rae (Park Hye-soo), who works as a translator for him. Ultimately, Gi-soo starts to show interest in the dance group as well, and he seems to have a lot of talent. Despite everything, there is still a war going on, though, and it seems clear which side each dance group member shows allegiance to... 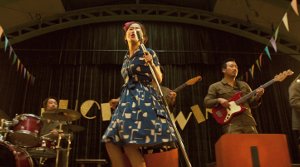 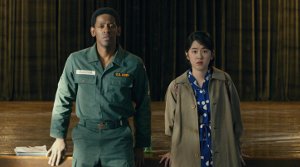 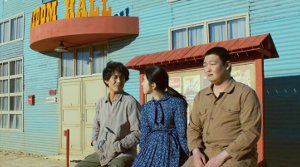 Review: Swing and tap dancing are subjects which are definitely not even close to my field of interest. But the fantastic Japanese movie "Swing Girls" taught me to keep an open mind beyond the usual and favored topics. Even though "Swing Kids" might not be a masterpiece, it still manages to captivate you emotionally and provides those cheerful but also sometimes dramatic elements you hoped for. We are dealing with an interesting genre mix here, as director Kang Hyeong-cheol ("Sunny") integrates tap dancing into the Korean War; ideology meets culture-connecting dance. The question where all this is supposed to lead to, is exactly what keeps your interest up in a movie which ended up being a little too long. Nevertheless, the jumble of genres is also the reason why not everything fits together seamlessly. Some final touches would have been a good idea. 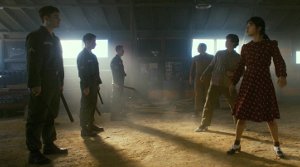 Korea has adapted its most traumatic historical event, the Korean War, numerous times already, most recently with "The Battleship Island" for example. But this time we find ourselves at a POW-camp, which redirects the focus from the gruesome war events to a smaller scale and changes the emphasis to the characters. That works pretty well. In addition, the story comes along surprisingly fast-paced and cheerful at the beginning. Surely, you never forget that the story takes place at war, but the prisoners feel rather well and goof around. However, as the brother of a war hero, Gi-soo has a certain kind of responsibility and you can see it in his grimness. But all this dissolves when it comes to his first dancing attempts. The movie's tone is clearly optimistic and the characters get more of a pep into their steps, which also has an effect on the movie's tone. 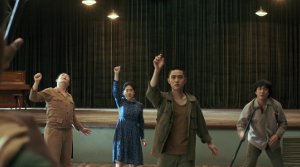 At least during the movie's first hour, conflicts between Gi-soo and a group of Americans are solved with a dance-off. The rhythm during those scenes is nicely done and the dances also seem appropriate for the 50s, the music, on the other hand, is not always so accurate when it comes to the era and occasionally strays into later decades, for instance with David Bowie's "Modern Love". But if you are afraid that K-Pop might find its way into the movie, making everything a little bit embarrassing, you can put your mind at rest. Towards the end, you get to hear Benny Goodman's "Sing Sing Sing" as anticipated, and a big band also provides us with a fitting rhythm here and there. With Do Kyung-soo ("My Annoying Brother") of the band EXO the filmmakers brought in a talented dancer, but the supporting cast is also very convincing during the dance scenes. Park Hye-soo ("Will You Be There"), too, can demonstrate her dancing abilities and also has a decent command of the English language, which can be seen particularly well during the singing sequence at the beginning of the movie. 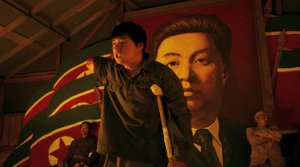 In "Swing Kids" there are numerous English dialogues and even if the American characters remain rather flat, the actors never come across as cringeworthy, but seem appropriately chosen for the movie. Jared Grimes comes across pretty likable in his role as he manages to express himself skillfully through dance. And it is dance, too, that breaks the language barrier which is illustrated by the secondary characters in a humorous way. But Jackson also brings a more serious tone to the movie because Americans might all be the same for Koreans, but Jackson constantly finds himself confronted with his fellow countrymen's racism. This rather dark tone then gets elevated into something tragic and dramatic through the different ideologies of the two Korean sides. Inevitably, all ends in a bloody conflict and you are shocked so much about the gruesomeness of some scenes that you suddenly realize that you had forgotten the movie's setting: war. 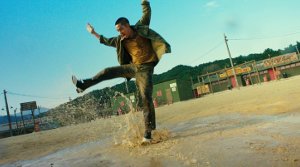 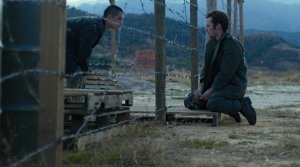 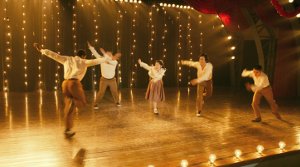 You can quickly identify the bad guy and the movie's lighthearted tone fades more and more into the background. There are some twists which are rather surprising and which underline the tragedy of a divided nation. You could certainly point out that some dialogues about ideology are rather dull, but it doesn't make what is said less true. But the question arises whether a small group of dancers could actually be able to break down this war's hardened fronts. "Swing Kids" pretty much has its heart in the right place and never gets as cheesy as you might have expected. However, the lighthearted tap dancing and the war drama do not always form a successful liaison. But the finale and the epilogue do manage to spread a certain kind of joie de vivre, which even makes those viewers who would normally have no use for tap dancing understand and enjoy this light-footed form of expression. And as mentioned before, "Swing Kids" is therefore a movie which delivers exactly what you hoped for.