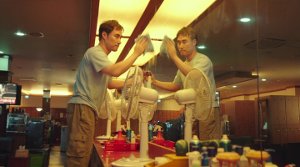 Story: Joong-man (Bae Sung-woo) works in a sauna studio and finds a bag with a lot of money in a locker. He is tempted to take it, but then he puts it in a storage room in case somebody claims it. He could really use the money because his mother has dementia and lives with him and his wife, who is having trouble with her. However, Joong-man is not the only one with pressing money problems. Tae-yeong (Jung Woo-sung) owns gangster boss Park (Jung Man-sik) a huge amount of money because he stood bail for his girlfriend Yeon-hee and signed a contract with her. But now she has suddenly disappeared and Tae-yeong has to provide the money. He has an old friend, who wants to leave the country with a huge amount of money, so Tae-yeong calls an acquaintance, Carp (Park Ji-hwan), and together they plan on relieving his friend of the money. Suddenly, a detective appears and asks about this friend. First, Tae-yeong denies knowing him, but the detective already knows more than he lets on.
In the meantime, Mi-ran (Shin Hyun-bin) suffers under her husband's beatings. She has run into debt, which is why she tries to pay it off by working at an escort bar. When she is thinking about killing her husband, she unexpectedly gets help from her boss (Jeon Do-yeon). But money corrupts and seems to steer Mi-ran into a catastrophe... 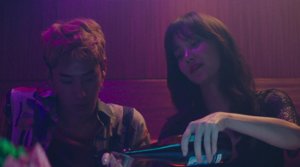 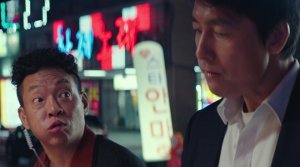 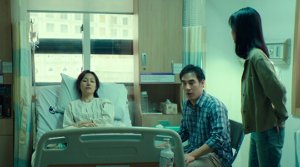 Review: In principal, the concept of "Beast Clawing at Straws" seems well-known. A heist movie, which is about following a bag of money and finding out who wants to get it into their possession and why. Greed is the fundamental motor of the developing story and the three different storylines eventually converge in a humorous way. What makes the movie entertaining is the fact that we know movies like that and are therefore excited to see which kind of connection there is between the protagonists. And you will not be disappointed, because in the end, everything comes together nicely. The well-written script as well as the popular cast do their part. The story is based on a novel by Sone Keisuke, offers some nice twists and is more interesting than the sometimes rather caricature-like characters (mostly at the beginning) will have you believe at first. 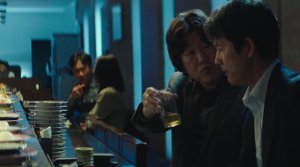 Bae Sung-woo ("Metamorphosis") plays the person that most likely serves as a reference point for the audience because his moral compass is not completely broken. He doesn't take the bag right away and instead waits whether somebody comes forward to claim it. The amount to which the characters are morally corrupt plays an important role for the story, because the willingness to do everything for money backfires on each one of them. Thus, karma is also a big theme and serves as the basis for the progression of the different plotlines. The story is divided into different chapters, but that seems a little bit random. After all, even within the chapters the movie switches between the different characters. The movie's tone might surprise you, as we get a pretty dark thriller, but the mood is also lightened up by some black humor. Nevertheless, you would have expected more humor than there actually is. 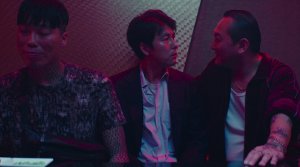 When it comes to the tone of "Beasts Clawing at Straws" there is a huge problem, though. While director Kim Yong-hoon has already been a helping hand to Jang Jin in "Righteous Ties" behind the camera, this movie is actually his debut work and there is no denying that you can see a certain kind of inexperience. However, there is noting to complain about when it comes to the directing job in general, the images are polished, surprisingly dark, we often get to see the entertainment district during night and at the same time the characters live in their own little microcosmos. Nevertheless, the movie's tone in not consistent. Due to the images and also because of the oftentimes pretty violent scenes, you tend to take the movie seriously. But then there is some dark humor which subtly works itself to the fore and during the movie's second half it even almost gains the upper hand. So, at this point, we do not worry about the characters' fates anymore, but instead realize that the movie just wants to entertain us. Because morally, you can hardly sympathize with any of them. 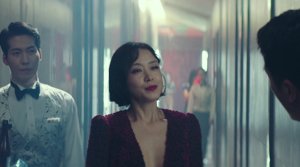 As mentioned before, the sauna employee functions a little bit as a moral reference person, but soon the airport employee, played by Jung Woo-sung ("Steel Rain"), becomes the story's focus. First, we feel sorry for him because it's his girlfriend Yeon-hee's fault that he is in such a mess and he's having a hard time getting over her, but then he is making it hard for us to root for him. He becomes a crook himself and from this point onwards, the mood is lightened up by a strange detective, who starts to make Tae-yeong crazy with his weird and intrusive way of being. The storyline around Mi-ran and her husband, who abuses her, is taking place on the sidelines, and at some point, gets wrapped up surprisingly sudden. But then Jeon Do-yeon ("The Shameless") enters the stage as the femme fatale and upstages everybody with her slyness and recklessness. Because of that, the entertainment factor shifts up another gear. 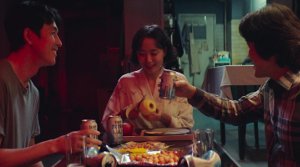 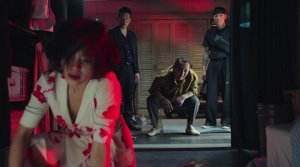 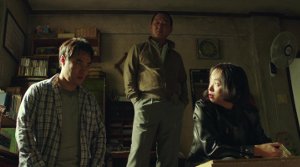 Are there really only amoral people in this world? This is the question you have to ask yourself after the pretty long lead time, but then you get sucked into the movie's world. And slowly we get to see some grey nuances, which we actually had already expected. The characters could have been fleshed out a little bit more, but the cast manages to make up for that with enthusiastic acting. Another nice touch is the fact that attentive viewers soon have to ask themselves whether the movie actually shows a chronological narrative style or not. The different storylines get intertwined nicely in the end, and the pacing increases in a natural way. There are some shocking developments and you never really know what might happen next. Therefore, "Beasts Clawing at Straws" is a pretty entertaining movie, which during the second half also manages to find the right mixture of dark thriller and light-hearted heist movie.