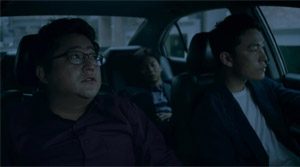 Story: Jung Jae-gon (Kim Nam-gil) is looking for Joon-gil (Park Sung-woong) who killed a man. Joon-gil was once the enforcer of a company called Jay Investment, but he has fallen from grace with them after he took the girlfriend from his boss, Hye-kyeong (Jeon Do-yeon). Jae-gon is put under pressure by his former superior, who has lost his badge because of corruption incidents, to close the case as soon as possible. During the arrest he also is supposed to make Joon-gil end up a cripple. Yeong-gi (Kim Min-jae), one of Jay Investment's employees, gives the detective the lead that he should look for Joon-gil at Hye-kyeong's. He actually finds him there, but Joon-gil manages to escape. Now, Jae-gon has no other choice but to go undercover as Hye-kyeong's new boss at an escort bar. He introduces himself as Joon-gil's former cellmate and hopes that Joon-gil will soon contact her. Meanwhile, Hye-kyeong is working as a bar hostess since she needs to pay back a pile of debt with her former boss. But soon Jae-gon starts to have an interest in her as well. He just can't lose sight of his actual duty. 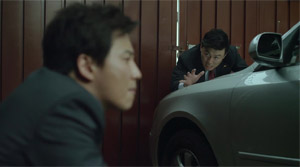 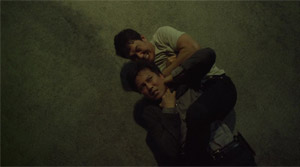 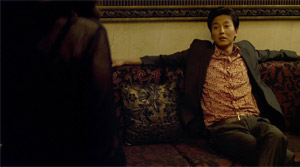 Review: "The Shameless" tells a love story that won't appeal to fans of classic romances. Emotions are concealed under a layer of violence and treachery and so it shouldn't come as a surprise that you very seldomly may be really moved by the events unfolding. For this the characters simply remain too mysterious and complex. Yet, it's also the same reason why this gangster crime romance can be so fascinating. The characters are written very multi-layered and the thrilling element of the story is in fact to get a glance at the true motives of the protagonists. That's not an easy task, but we still slowly and surely get closer to the truth. The ambiguity of the motives we have to presume behind the actions of the individuals isn't just reflected by a gritty and grey gangster world, in which black and white can't be told apart, but also gets a strong fundament by the acting achievements. 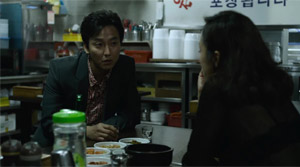 At first, Jae-gon may not accept the bribe money, which makes him appear as one of the good guys, but very soon we realize that his loyalty doesn't just lie with the police and thus with serving the people. In order to do his job, he clearly prostitutes himself like Hye-kyeong by working against his own principles. Thus, it's difficult to sympathize with a protagonist who actually shouldn't be able to look himself in the mirror, but Kim Nam-gil ("Pirates") still manages to bestow multiple layers on his role, which makes him not just detestable. After all, it may be true that the undercover cop getting close to Hye-kyeong might only be a means to an end for him, but then again there also could be genuine feelings involved, too, and what's a romantic flick if this wouldn't be the case with at least one of the two parties. 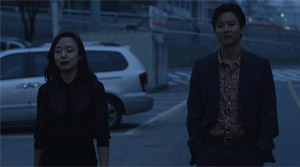 But there is also Hye-kyeong, who has fallen from grace with her benefactor and leads a pitiable life. She isn't just the victim, though, who needs a shoulder to cry on while drinking, but she is also a strong woman who doesn't put up with everything. Furthermore, she knows how to twist men around her little finger. Therefore, she is the most complex character in the movie. You can never tell with her whether she is the victim or culprit. He relationship to Joon-gil isn't clear either. Is she put under pressure by him or is she even afraid of him? Or maybe she does really love him or simply is looking for someone to give her to opportunity to escape her cruel life as a bar hostess? Jeon Do-yeon ("The Housemaid", "Memories of the Sword") naturally manages interlacing the different layers of her character in the most iunscrutable manner with flying colors. 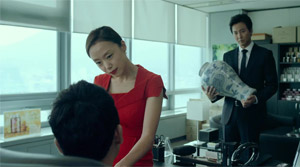 In a supporting role Park Sung-woong ("For the Emperor") can be seen, too. Sadly, his talent isn't made good use of. Particularly, the relationship between him and Hye-kyeong should have been illuminated more in a few additional scenes. So maybe director Oh Seung-wook, whose debut work "Kilimanjaro" was 15 years ago, but who since has co-written "Christmas in August" among other movies, shouldn't have put so much emphasis on keeping everything wrapped in a fog. But it's also this fog of emotions that is caught well by the film's cinematography. The protagonists are always acting by night-time or at dawn, meaning in the twilight of their feelings and beliefs. "The Shameless" isn't just a romantic drama, though. 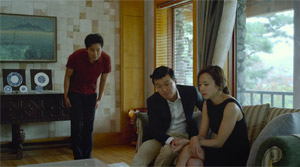 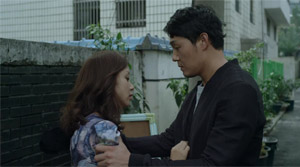 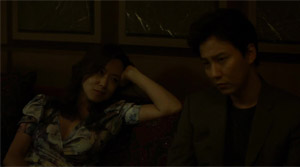 The pacing is quite slow all throughout, but every now and then there are actually a few violent brawls, too, just as you would expect from a gangster movie. They are in fact quite rare, yet manage to provide a nice choreography and so can even convince fans of gritty action cinema. Accordingly, we are easily convinced that the love story is really set in the gangster milieu. However, the film struggles with the emotions being hidden so strongly behind masks or maybe are just being acted that there is only little to make the viewer feel emotionally engaged by. Thus, we don't care about the characters' fate. Moreover, the last 15 minutes resemble more of an epilogue that has been added a bit heavy-handedly, even though a few very important things are taking place. Personally, "The Shameless" couldn't resonate with me that perfectly because of aforementioned reasons, but the complex written characters, a melancholic and gritty gangster setting, a nice soundtrack and good pictures give this movie a right to exist.