Story: After Chi-sung (Jeong Jae-yeong) has attacked a man with a knife by order of his boss (Min Ji-hwan) he ends up in jail. Since he refuses to sell out his boss he has to remain behind bars for seven years for attempted murder. In jail he reunites with Soon-tal (Ryoo Seung-ryong) who was presumed dead and who he has grown up and served with under his boss. Chi-sung's boss rewards his loyal subordinate for not having blown the whistle on him by ordering his assassination, though. Because, as it turns out, the man Chi-sung attacked might have a profitable deal for the gangster boss. In return he just wants to see Chi-sung dead. Ju-joong (Jeong Joon-ho), also a friend of Chi-sung, who now has taken over his position as the right hand of the boss, knows nothing of all this. However, when Chi-sung finds out about the assassination order in jail, he makes it his top priority to escape from prison with Soon-tak and a few other inmates, in order to confront his boss. Still, the escape plans are extremely chaotic and it becomes more and more unlikely that Chi-sung can actually manage to break out.

Review: Movies in which the image of the chivalrous gangster with his code of honor is deconstructed and instead the picture of the actual amorality of a brutal criminal union is shown in which survival of the fittest is the only prevailing rule are well-known to us. Even lately turned Asian movie fans should be familiar with that topic since Johnnie To's "Election". Director Jang Jin ( "Going by the Book"), tough, is uncovering the true colors of Korean gangsters with a mixture of cynism and humor for which he is well-known for. The end product is entertaining and unpredictable, but sadly also inconsistent. Jang often doesn't maintain the necessary overview and simply puts his focus on something different according to his current mood. We also know that quite too well from him, too, and this also means some points off from the rating of "Righteous Ties". 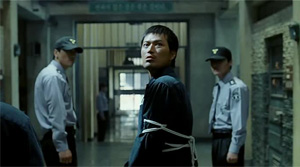 It's pretty easy to become familiar with gangster Chi-sung. During the first half we get to know his story and countless other characters are introduced as well. Unfortunately, this becomes rather tiring at some point. This becomes especially apparent from the second half onward, when the pacing finally shifts up a gear and the prison break is planned. Here, once again the hit-or-miss nature of Jang Jin's way of making movies is revealed. He constructs wacky moments that often end in complete chaos. Either you have to laugh about that or it simply strikes you as odd. Luckily, the former is more often the case in "Righteous Ties" than not. Jang's constant winking, which constitutes a great part of the humor, is simply refreshing, even the more as it makes it easier to overlook many of the problematic implausibilities. 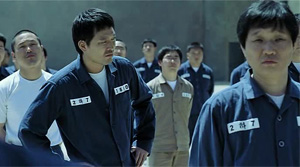 To give an impression of what kind of coincidences we have to deal with I may be allowed to give an account of one of those episodes. Ju-joong and other men are supposed to get rid of their fear of firing guns, after all knives and baseball bats aren't enough anymore to procure respect and safety as a gangster. During firing exercises aimed in the air a fighter jet of a nearby military station is hit by one of the bullets and a chain reaction commences. As a viewer you often find yourself thinking: Did this really just happen? But all those odd accidents happen to work out better than expected thanks to the humor as already stated. What poses an undeniable problem, though, is that "Righteous Ties" actually seems to be a movie that is composed of at least three different films.

First, there is the gangster story, in which a gangster is abandoned by his boss for latter one the get the chance to participate in a lucrative deal. Here themes like loyalty, brotherhood and betrayal are put into the foreground. Then somewhere in the middle the movie becomes a prison flick, in which the apparent scum of society is actually turning out to be quiet likeable. Towards the end everything inevitably has to become a revenge thriller. All of this is somewhat kept together by the motive of friendship, that is depicted in several variations. Yet, director Jang often takes too much time to shape his characters and by doing so forgets to give his movie some coherence with a well thought-through story. 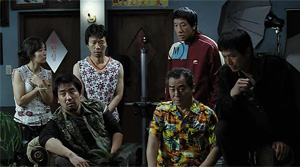 Nevertheless, Jang has an eminent knack when it comes to choosing the actors for his film. Even the smallest role is fantastically cast. Jeong Jae-yeong ("Castaway on the Moon") carries the movie on his shoulders really great, but Ryoo Seung-ryong ("War of the Arrows") oftentimes steals the spotlight despite his very quiet nature. It is similar concerning the supporting actors. Strangely enough, one of the most moving scenes is one in which one of the gangsters visits his wife in jail. Yet, not so successful is the ubersentimentality towards the end, which is also created by a corny soundtrack. At the end you will have had a lot of fun with "Rightous Ties" for most part, but unfortunately the chaotic screenplay is frustrating and therefore tones down the strengths of the movie by a lot.