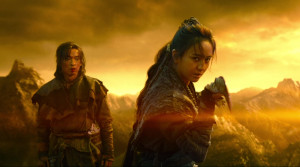 Story: Guan Ning (Lei Jiayin) has been looking for his little daughter Tangerine (Wang Shengdi) for six years. She was kidnapped, and after all this time, he finally manages to find the perpetrators. When he confronts them, however, the criminals are able to escape and the truck full of children they leave behind makes the police think that Guan Ning, who is still at the crime scene, is actually the kidnapper. Thanks to the help of Tu Ling (Yang Mi), he is able to escape, and the woman introduces herself as someone who knows where to find his daughter. She works on behalf of billionaire Li Mu (Yu Hewei), whose app is a huge success on the market. Unfortunately, he is also sick, and Tu Ling tells Guan Ning that her boss' health is directly linked to the health of the villain of a continuous internet story called "Godslayer", written by the unsuccessful author Lu Kongwen (Dong Zijian). Guan Ning is supposed to kill the author, and in return they will do DNA tests with the five girls they located who could possibly be his daughter. Guan Ning agrees, but when he reads Lu's story, he realizes that the extremely vivid dreams he had lately, are a direct reflection of the author's story. When he meets Lu Kongwen, he has doubts about whether he should really kill him, or if he is not much more likely to be able to help him get his daughter back, because there is a girl in his internet story who clearly represents her. 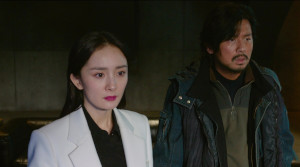 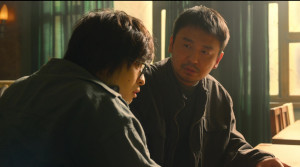 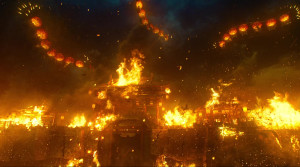 Review: There are movies which just take a little longer to warm up to. "A Writer's Odyssey" is one of them. It quickly becomes clear that two different worlds serve as the story's setting, and even if the frame story is clearly the one taking place in reality, the two worlds intertwine over and over again. Therefore, unlike in movies such as "Super Me", the focus is distributed more evenly. However, this makes it difficult to be drawn into the movie. We have hardly managed to find our bearings, when we are suddenly thrown into a fantasy world and have to deal with a living armor and a young man seeking revenge and trying to overthrow a godlike ruler. The two storylines just continue next to each other for quite some time before you can actually see something like a link between the two. But even then, you can still feel that three people worked on the script. 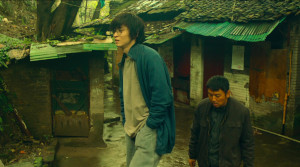 Specifically movies of the fantasy genre have to be careful with presenting too many ideas all at once - especially concerning the visuals -, because otherwise, the audience might quickly feel overwhelmed and dismiss the whole thing as mere fantasy bollocks. That's how I felt here. Despite the movie's alleged two and a half years in post-production, you can't really call the CGI convincing. But then there is also Han Qiming's great camera work, some excellent lighting as well as imaginative costumes and innovative monster designs. And so, at a certain point, you feel like the world is supposed to look exactly like that and no other way, like it is the intended style, a style that wants to separate reality and fiction a little more. And just like that, the CGI almost turns into one of the movie's strengths. But is the director really trying to draw a line between the two worlds? Because strangely enough, the movie part taking place in "reality" is also full of fantasy elements. Not only does Kongwen manage to influence reality through his stories, Guan Ning is also able to turn a stone into a deadly projectile, and there are other candidates for a superhero academy too. 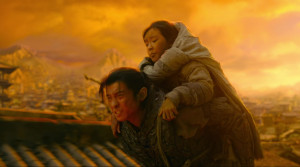 However, this aspect is not dealt with any further. Maybe that's one of the problems I had with the movie at the beginning. At some point, though, you just accept things as they are and simply take in the two worlds with their specific rules. That's when you get drawn into the movie. Until then, the visuals manage to captivate you. The movie creates a beautiful atmosphere, which, unlike other Chinese fantasy flicks, mostly stands out with its gloominess. As a result, rooftop chase scenes, ginormous axes and even a battle including dragons made out of huge balloons, all of this has a completely different vibe than your typical candy-colored and family-oriented genre production. In this movie there is actually something at stake and death is always a possible outcome. The amount of bloodshed also makes this clear. This circumstance contributes enormously to the suspense level. 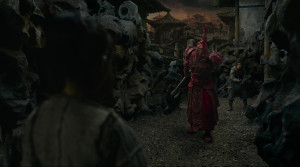 With some of the elements mentioned, the movie's creativeness should already have become apparent. But there are several other scenes that have something special about them, like Guan Ning knowing how to defend himself in a library against some henchmen using golf balls, or the grand finale against a gigantic "god". Even with or maybe especially because of the latter, the action is a lot of fun. While I pretty much fell asleep during the showdoen of movies like "The Yinyang Master", despite all the loud noises and special effects, I was just constantly on the edge of my seat during this flick. Which is a nice achievement, and one that shouldn't come as a surprise when you hear that the movie's director was Lu Yang, who has already proven that he understands wuxia flicks, see "Brotherhood of Blades" and its successor - and this is also noticeable here. Still, the movie's biggest weakness is the connection between the two storylines, which is just too flimsy and doesn't manage to make the movie feel like one single ride. 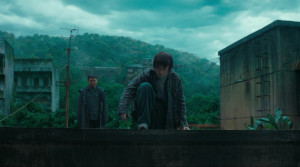 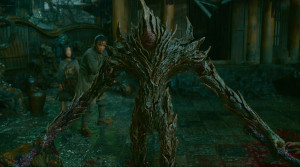 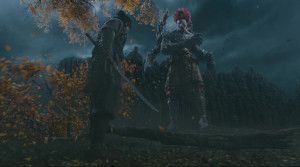 It is also a pity that the movie didn't make more out of the individuals and personalities of both worlds, and that certain parallels or differences between them were not worked out more strongly. Thus, you are reminded a little bit of "Sucker Punch" at the beginning - you get a lot of eye candy, but the rest doesn't make that much sense at first. Especially the middle part is a bit bumpy, and you can't quite understand how certain things develop, because even in "reality world" there are coincidences that seem as if they only existed because the writer wanted them to (as mentioned before, three writers, to be exact...). That way, it takes far too long until we get emotionally invested in the movie. A lot of things just don't fit together, but fortunately, the movie is basically about a father who wants to save his daughter, no matter what. At some point, this manages to captivate us, and we actually start to root for the characters. This is also thanks to a great soundtrack by Jed Kurzel and some excellent sound effects. "A Writer's Odyssey" is honestly a mixed bag, but in the end, the good outweighs the bad and the movie is quite a lot of fun to watch.