Story: Shen Lian (Chang Chen) is member of the Jinyiwei, a secret group of assassins working for the emperor. Along with his comrades Lu Jianxing (Wang Qianyuan), who is reaching out for a promotion for quite a while already, and Jin Yichuan (Li Dong-xue), who is suffering from an unknown illness, he is ordered to kill the once powerful eunuch Wei (Chin Shi-chieh). The assassination seems to have been successful, but soon inconsistencies start to surface. The leader of the secret police Zhao Jingzhong (Nie Yuan) has his very own reasons to not further investigate the case, yet evidence piles up that support the theory Shen Lian might have been bought by Wei and has only staged his death. Probably since he needs the money in order to buy the freedom of Miaotong (Liu Shishi), who he has fallen in love with and works at a house of pleasure. Jin is also carrying a secret and the thief Ding (Zhou Yiwei) is squeezing every dime out of him for keeping quiet. When Lu is finally promoted because someone has made the necessary bribes for him, it becomes more and more clear, that Shen didn't tell the truth. But this isn't the only secret at the court that is about to be uncovered.

Review: Really good wuxia movies have become scarce these days. However, "Brotherhood of Blades" shows that the genre isn't dead yet and that CGI-loaden blockbusters without any substance aren't everything that defines the wuxia genre nowadays. The film particularly impresses with its sophisticated screenplay which very nicely combines wuxia story, betrayal, political intrigues, drama and brotherhood and is full of well achieved twists. And not only are the characters well developed, they also come along with an unsual depth - also thanks to the achievement of the great actors - which gives the movie a psychological level, too. There are no simple black-and-white characterizations and that is what's making the individuals so fascinating. There may be a few flaws in technical respects, but all in all this wuxia flick is certainly a well done addition to the genre. 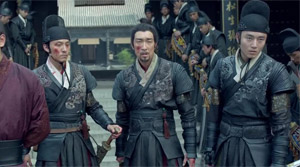 And this even though "Brotherhood of Blades" doesn't start off smoothly. The actual hero of the story, Shen Lian, looks more of a villain than anything else. But it soon turns out that there is a lot more to him than first meets the eye. Chang Chen is finally back in his element. In "The Last Supper" for example he couldn't play out his true strength, and that is without a doubt subtle and multilayered acting. Here he plays a man with a stoic face who under the surface somehow doesn't seem to be that satisfied with what he does. And there are even reasons for that which are revealed later on. But next to Shen Lian the two other members of the Jinyiwei, an organisation we have already come across in "14 Blades" for example, also manage to convince with their individual stories and motives for their actions. 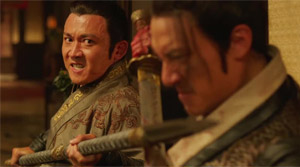 This level of detail comes as a surprise and bestows weight on the movie on levels you wouldn't have expected. Accordingly, director Lu Yang succeeds in linking the different personal stories with one another in a convincing manner, making the overall work lose nothing of its suspense level even when shifting between the individual stories - on the contrary. Furthermore, some of the supporting characters are quite interesting. For instance there is Ding, whose alignment could best be described as chaotic neutal, or Miaotong who manages to reach an astonishing level of vividness during one dramatic scene. Ultimately, "Brotherhood of Blades" also succeeds in being a well done drama at the right moments, in which the characters and their inner struggles against their own demons come to light. It's amazing how director Lu even found the time to work on an emotional level without delivering overfraught kitsch.

First and foremost, this is a wuxia thriller, though. Indeed "Brotherhood of Blades" has its best moments when the secrets, which not only the three Jinyiwei members keep from one another, are slowly revealed. There are constantly new developments and even though the many names and faces may be overwhelming, the effort to keep at it is worth the trouble, because the outstanding screenplay with its intrigues and twists alone will keep you at the edge of your seat. Thus, the wuxia fights really wouldn't have been necessary. They may be solid, but are still a bit disappointing, whereas more than anything else the hectic editing and too many close-up shots which make the action confusing have to be criticized. Moreover, the obviously computergenerated blood is irritating. Yet, the fights aren't scattered throughout the film without motivation. 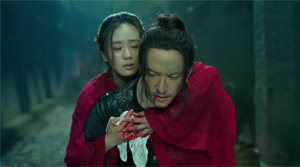 Technically, "Brotherhood of Blades" isn't always perfect. But although it may not have had lavish production values, the movie seems to have made better use of its budget than similar works. Thus, you can see beautiful sets, costumes and interesting weapons. Some of the slow-motion sequences at the beginning, when the three friends are introduced as unbeatable heroes, are a nuisance, but apart from that there is some notable camera work. Unfortunately, there is a an haphazardly added ending that wouldn't really have been necessary and is more of an epilogue. Apart from all that the movie captivates thanks to a sophisticated screenplay, a perfect balance between wuxia action, thriller, court intrigue and drama as well as great actors. The last time a movie could surprise me this much was when watching Reign of Assassins". Therefore, "Brotherhood of Blades" deserves to be known by a lot more people than it currently is.