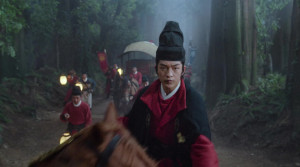 Story: Qingming (Chen Kun) works for the Yinyang Bureau. After a big war between humans and demons, the demon emperor was defeated and since then humans and demons each stick to their own. Demons who still dare to enter the human realm are imprisoned with the help of talismans and spells. These prisoners, as well as the Scale Stone, a stone that harbors the demon emperor's power, are guarded by Yinyang soldiers. One day, the dead bodies of some soldiers and of Cimu (William Chan), Qingming's best friend, are found. Qingming is at the crime scene and gets accused of the murder because he partly has demon blood in him. He flees and seven years go by. In the meantime, he has gathered a large crowd of demons around him and lives peacefully with them outside of the city. Every now and then, though, he is forced to raid a caravan. This time he robs Boya (Qu Chuxiao) and the imperial army, who transport a tribute delivery of precious treasures. Boya falls into disgrace because of it, and now he does everything he can to find Qingming and redeem himself. Shortly afterwards, the Scale Stone gets stolen, but it accidentally falls into the hands of one of Qingming's demons. Now it's Baini's (Zhou Xun) responsibility to retrieve the stone, so she has to find her former friend Qingming. But the real perpetrator behind the theft of the Scale Stone has already made new plans to finally bring this powerful artifact into his possession, too. 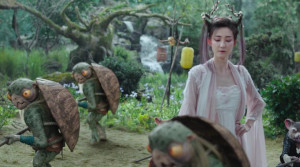 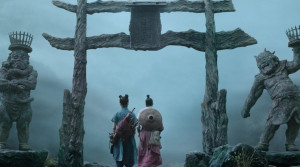 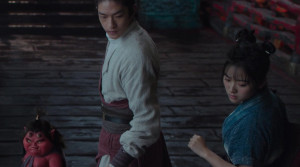 Review: For any reasonably informative review, it is probably unavoidable at this point to explain first why Netflix has two movies in its program with more or less the same title. So, what's that all about? The streaming service released "The Yin-Yang Master: Dream of Eternity" just a few months ago, a movie which is based on the novel "Onmyoji" by Baku Yumemakura. However, in China this source material was also turned into a mobile game, and the movie this review deals with is based on that game. Therefore, there are, of course, countless similarities between the two movies, but otherwise the two works are completely unrelated. This means we get new actors and also a different tone. For example, "The Yinyang Master" is a lot more light-spirited and vibrant, which is mainly due to the many colorful demons. 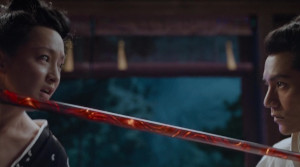 The demons may actually seem as if they had been created for a rather young audience, but astonishingly enough, this is not the case. While the story itself is quite carefree, there are numerous moments which are surprisingly dark or brutal. However, the demons also spice up the fantasy world a little, and they show a lot of creativity. There are the cheeky but also battle-scarred rodents, turtles, and a cherry blossom tree which can take human form (or maybe the other way around). Of course, the special effects don't look perfect, but compared to similar Chinese fantasy worlds they are still more appealing because they express a certain style, and they are not supposed to look realistic in the first place. This also applies to a few sets. 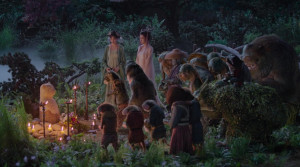 Fortunately, the movie only uses this over-the-top style where it fits. This means that we do not get any other obvious green screens, instead we also see some real locations and landscapes which were captured wonderfully. So, when it comes to the movie's visuals, director Li Weiran did a great job. Unfortunately, the same cannot be said about the rest of the movie. Of course, there is the story, which seems quite familiar because of the already mentioned other movie adaptation of the source material, but even though there are a few deviations, it mostly does not represent anything exceptional. In order to draw us into the events of what is happening, the story needs to work with its characters - and that's exactly what the flick fails to do. The protagonists are not fleshed out enough, and it's actually quite hard to care about their fates. As you would expect, things look even worse when it comes to the supporting characters. 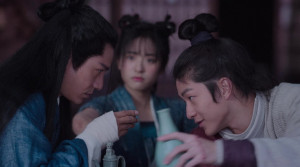 Chen Kun ("Chongqing Hot Pot") moves somewhere between lovable outsider, cynical renegade and wise master. The entire picture just doesn't work and you don't know what to think of him. Qu Chuxiao ("The Wandering Earth") embodies the demon hunter, who, strictly speaking, does not really hunt demons, and he is supposed to establish some kind of buddy-like relationship with Qingming. For this, we actually get a drinking scene, but sparks are not exactly flying here. Instead, the sudden familiarity between the two seems a bit forced. There is also a tragic love story between Qingming and the head of the Yinyang Bureau, played by Zhou Xun ("Painted Skin: Resurrection"), hidden in the movie somewhere, but this subplot turns out so plain and was written so sloppily without delivering any proper background that it even makes you feel sorry for Zhou Xun's wasted talent. Acting-wise, the movie therefore walks on rather thin ice. 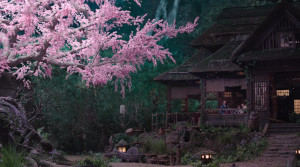 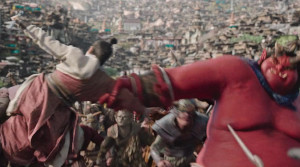 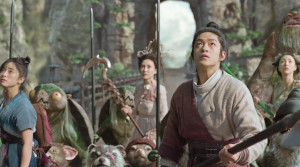 Because the movie does not manage to involve us emotionally, the story also hardly interests us, and the few fights we get unfortunately do not change that either. While they may look like wuxia fights at first, they actually only consist of special effects. As expected, the finale is a massive fantasy spectacle, in which seemingly a lot of things happen, but actually nothing really exciting. A little down-to-earth choreography would have been nice. And even though the soundtrack was composed by Shigeru Umebayashi, it turns out rather plane and a little too shallow to make the action scenes at least a little bit exciting. In the end, you get some nice fantasy entertainment, which may be worth watching for fans, but everyone else will be left cold. This is due to poorly written characters and a story that can hardly be called special. "The Yin-Yang Master: Dream of Eternity" chose to go more into the direction of a wuxia flick and therefore worked much better than this movie adaptation.