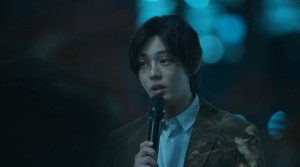 Story: When quite a few people witness three demons appearing out of nowhere in order to take a man with them to hell, no one knows what to make of it. Before that, the leader of a religious association, Jeong Jin-so (Yoo Ah-in), showed videos on social media in which the demons can clearly be seen as well. He explains that the victims were previously visited by a heavenly creature who told them when they would be taken to hell. He claims that this is a sign from God telling people to finally live life without sin. For the police, it is primarily a murder case, and detective Jin Kyeong-hoon (Yang Ik-june) takes on the case. At the crime scene, he then actually meets Jeong, the leader of the "New Truth Society", who gives a sermon there. He questions him, but as already expected, he does not make any progress in the case that way either. However, the cult's influence continues to increase over the next few days and weeks. Eventually, the cult wants to make a deal with single mom Park Jeong-ja (Kim Shin-rok), who also recently received her judgement from an angelic being. The "New Truth Society" wants to broadcast her damnation to hell live and pay her a lot of money for that. Money she needs to have her two children taken care of after her death. The lawyer Min Hye-jin (Kim Hyun-joo), who had already tried to take legal action against the cult, wants to secure the deal, but does not feel comfortable with the whole thing. The public broadcasting could plunge the entire country into chaos. 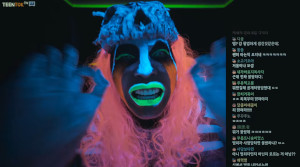 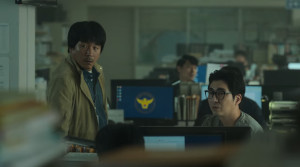 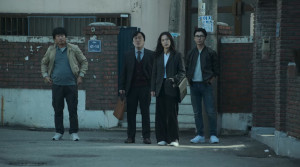 Review: After "Squid Game" it was only a matter of time before there would be another show from Korea that had enormous success on the streaming service Netflix. But as it is often the case, the hype around such shows flattens out quite quickly. "Hellbound" immediately catapulted itself to the top of the tv shows streamed, but it did not stay there for too long. While "Squid Game" was already overrated, in my opinion, "Hellbound" struggles with some additional problems too. Including the fact that I expected something better from the director of the outstanding "Train to Busan". Director Yeon Sang-ho creates a live action adaptation of his own webtoon here, and he makes it clear during the first few minutes that we can expect a lot of violence. Strictly speaking, this may be the case, but why the show is X-rated (at least here in Germany), while the already mentioned "Squid Game" contains much more brutal scenes, is unclear. In a horror show, however, you should expect some violence. But if you take a closer look, this is more of a drama series. 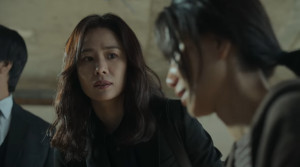 Thematically, the series is about damnation, religion and hysteria. With that, the show is strongly anchored in reality, even though there is a supernatural hook focusing on three demons appearing out of nowhere. Director Yeon holds up a mirror to society and shows how people behave when confronted with a cruel, new reality. People panic or irrationally turn to a cult that tries to explain God's mysterious ways Old Testament-style and calls for a more devout life (and of course for joining the cult). People are very quickly willing to do anything to find comfort. Of course, it is also important to think in extremes. Either you are a sinner, or you are not. The fact that some "sins" in no way justify being condemned to hell is no longer of interest. There is no sophisticated thinking anymore, and so the show addresses a very obvious sore point of today's debate culture. 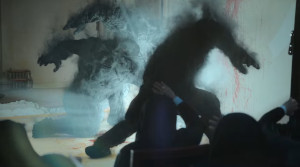 Of course, the movie is also about religious bigotry, and when it comes to cults, Korea is in the vanguard anyway. Yoo Ah-in ("Voice of Silence") is an interesting choice for the role of the cult leader, because with his friendly and youthful face he does not have the typical charisma of a man like that - but he does have charisma, nonetheless. Yoo also manages to give his role something fatalistic, even though the cult leader still gives other people hope. The other roles are also well-portrayed, and there is a good number of characters too, with the focus on them changing over time. Especially from the fourth episode onwards, the series is no longer about the new situation and the shock, that the appearance of supernatural entities has on humanity, but more about the effects it has on society and how it changes. 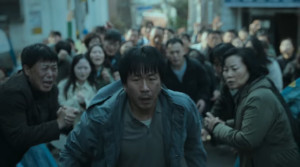 Unfortunately, this is where the biggest problem of "Hellbound" lies. In the second half, the show simply lacks some twists and turns, and the pace drops too. Especially in the first three episodes, it is particularly outstanding that new developments are almost thrown at us, and that there are new surprises waiting around every corner. Normally, such tv shows tend to stall unnecessarily. Later, however, everything somehow just drifts slowly towards the end. Even in situations, in which you would actually expect a surprise, nothing happens. Innovative moments, such as the hysterical, but also somehow funny, and vigorously screaming influencer, who repeatedly informs us about the events via streaming insertions and tries to bring people to God in his own way - a true highlight -, are simply missing too. Instead, we just get repetitions towards the end. Why the three demons constantly have to be shown - although, after their first interesting appearance, they actually only stupidly beat up their victims (THIS is supposed to be a foretaste of hell's torments?), the CGI does not really look that great, and the entities' design is nothing special either -, remains a big question too. 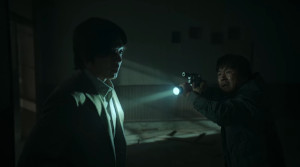 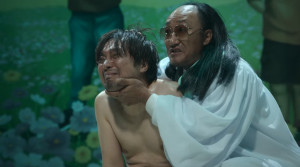 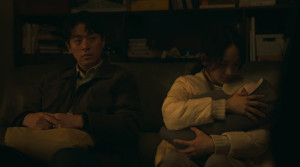 When "Hellbound" makes fun of our society - but in a bitterly evil way and with quite some nihilistic tendencies -, the show works best. Passers-by filming with their cell phone how an elderly man is beaten up by a cult member without intervening, a cult that acts as self-declared new police, people being condemned to hell while their entire families lose their faces with friends and acquaintances, all this is nice to watch. Especially the first half of the series is great and creates a lot of suspense. The second half, however, seems a little dragged out, despite a few interesting moments. In general, hardly any questions get answered in this dark-fatalistic series, which can also be frustrating. But in the last scene, another question is raised which actually makes you wish for a sequel. "Hellbound" clearly has its undeniable weaknesses and was once more reviewed too favorably by many critics. But the series still manages to please the right kind of audience.