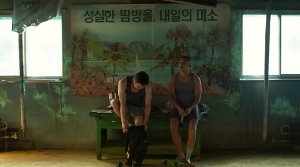 Story: Chang-bok (Yoo Jae-myung) and Tae-in (Yoo Ah-in) sell eggs on the market during the day, but they have a different full-time job as well. They set up torture rooms for a gang and later remove the bodies. One day, one of the smaller bosses asks them to take in a kidnapped little girl for some time until their father pays the ransom money. For Chang-bok, this is impossible, but Tae-in lives quite far out in the countryside, where the girl wouldn't be noticed. Tae-in is absolutely against it, especially because he is mute and it would be difficult for him to communicate with the girl. Nevertheless, he has to harbor the kidnapped girl Cho-hee (Moon Seung-ah) for a few days. Cho-hee soon becomes friends with Tae-in's little sister Moon-joo (Lee Ka-eun), teaches her some manners and cleans up the apartment. However, her father is still not willing to pay the ransom money and then it turns out that Tae-ins and Chang-bok's direct superior had some businesses running on the side, so that he was eliminated by the gangster boss. And no one knows about the kidnapped girl either. Now, Chang-bok, Tae-in and two accomplices are trying to complete the exchange and get a good ransom for Cho-hee. Unfortunately, Chang-bok is anything but a professional in this line of work and something goes wrong during the money handover. In the meantime, Tae-in tries to keep the girl hidden any way possible, but there are also some difficulties. 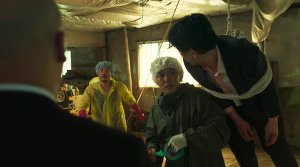 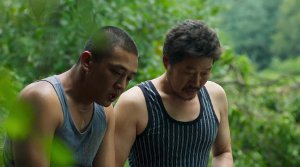 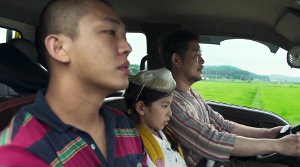 Review: "Voice of Silence" is a movie of contrasts. This does not only show in many scenes, but also in the movies genre. On the one hand, it is a dark thriller, on the other hand, it is also an almost warm-hearted family drama. First of all, this makes the movie special as it makes it hard to categorize it on the basis of existing patterns. Interestingly enough, though, this was taken very positively by critics and viewers in Korea. Abroad, the movie also has a chance to create a certain niche existence, as you can clearly see a few art-house influences, while a dry, black humor dominates the story, and you can easily relate to the characters. The individuals also represent some social problems within society, which the movie addresses this way. 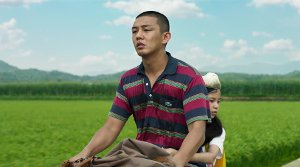 The first thing you notice, is the dramatic thrillers tone. The side businesses of the protagonists are presented with a certain kind of pragmatism and callousness, which almost comes across as shocking at the beginning, but later you can understand that for the two their work is simply a side job that brings in the money. After all, they are at the bottom of the food chain and don't really have any other ways to make ends meet. The black humor also makes it easier for us to think of Chang-bok and Tae-in as not such bad guys. In fact, in their own way they are even likeable, because they simply dont seem to have a chance of being good people and surviving at the bottom of society at the same time. Chang-bok does penance by reading the Bible a lot and he even tries to "convert" Tae-in, while he also says one or two prayers for the bodies that they remove. With Tae-in, things are a little more complicated. 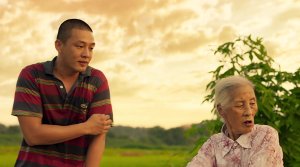 Yoo Ah-in ("Alive") physically surprises us with the fact that he gained about fifteen kilos for the role. In addition, he doesn't say a word in the entire movie. Theoretically, Tae-in should be able to talk, nothing points to a trauma that robbed him of his voice. All that remains as an explanation for him not talking either is that he does it as a form of protest. Society doesnt notice people like him, they literally have no voice. So why would he talk? But it is certainly not beneficial for his sister's intellectual development that he remains silent. Furthermore, his house - not more than a run-down cabin - looks like a trash dump and his unwashed and uncombed sister looks like a beggar. You inevitably have to blame Tae-in for it, but he simply seems overwhelmed with life in general. However, we don't get a glimpse into his past. Instead, there are scenes with the kidnapped girl that show us once again that Tae-in is actually not a bad person. 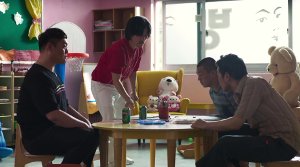 Chang-bok, played by Yoo Jae-myung ("The Beast"), represents something like Tae-ins bigger brother (or father substitute). Willingly, or sometimes unwillingly, Tae-in follows his instructions. The mute man simply has no clue about life. Rules and etiquette are also things that, weirdly enough, the kidnapped girl brings into the house. The two child actors do a good job and sometimes you get the feeling that an extremely unusual family is growing together here. Despite touching moments, though, the movie constantly makes clear that Cho-hee is not part of this family of her own volition. Furthermore, the fact that Tae-in's home is not a place fit for children is also shown repeatedly in some rather unusual scenes. For instance, Cho-hee draws petals around the blood stains on the ground caused from a body transported away, or she instructs little Moon-joo to help her dig a grave. These are extremely strong contrasts, scenes that feel wrong, and yet they clearly show that everything eventually becomes "normal" in life. 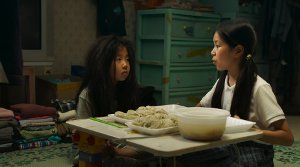 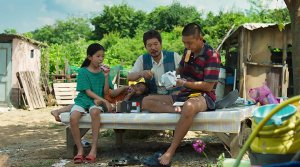 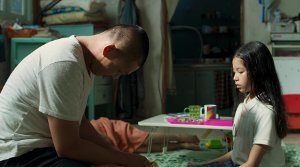 Nevertheless, we should not delude ourselves. While we do also get a little family drama with some warm-hearted scenes, we also have to realize that kidnappers are still kidnappers and Cho-hee is well aware of her role. Her family, in the meantime, negotiates the ransom money, as the girl is not worth as much as the son, who was actually supposed to be kidnapped. This is where the criticism of the money-obsessed and still very patriarchal Korean society comes to the foreground. In her debut work, female director Hong Eui-jung combines this social criticism with a lot of black humor, some absurd scenes and many contrasts within the mise-en-scene, for example when criminals meet in a kindergarten playroom to do their business. Moreover, for an actually pretty dark drama-thriller, the color scheme used is very bright and colorful, which the numerous scenes in the countryside show as well. But with its partially open end and a few scenes that - even with all the love for black humor - seem a little too implausible, there are also some negative aspects. Nevertheless, "Voice of Silence" is really fascinating. A movie that moves between genres.