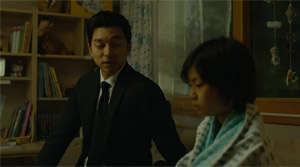 Story: Seok-woo (Gong Yoo) first and foremost only thinks of himself. This has served him very well at his work, but it also destroyed his marriage. Thus, his mother now takes care of his daughter Soo-an (Kim Soo-an), who on her birthday wants to visit her mother in Busan. Since Seok-woo, being the unattentive father he is, buys her a present she already has and by this proves once more how much he neglects his daughter, he has no other choice, but to take her to his ex-wife in order to make up for it. Just when they have boarded the train there are news of riots in the whole country. Apparently, there is some kind of epidemic which causes the infected to behave like maniacs who can infect others with their bite. There is also an infected on the train and so people soon start to panic. In their fight for survival father and daughter get some help from Sang-hwa (Ma Dong-seok) and his pregnant wife Seong-kyeong (Jeong Yu-mi). Contrary to initial reports the next town the train stops isn't under control of the military, though. The survivors have to board the train again and try their luck in Busan. However, it's a long way to the city and the survivors share the train with many infected... 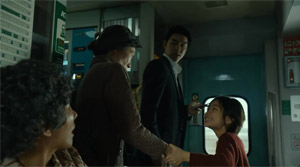 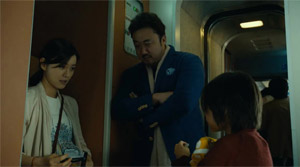 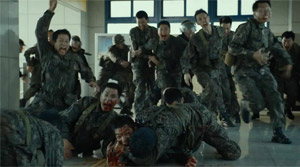 Review: There aren't really a whole lot of zombie movies from South Korea and even less of those are worth mentioning. Maybe fitting that criteria best is "The Guard Post", even though this would be defining the zombie genre very loosely. With "Train to Busan" director Yeon Sang-ho, who has already been responsible for the indie anime flicks "King of Pigs" and "Seoul Station" - latter one telling the background story to "Train to Busan" -, delivers a neatly produced zombie movie, which also comes along with a sociocritical undertone and yet is aiming at a broad audience. So if you are looking for a gory horror flick this is not the right address for you. The movie is rarely scary, instead it revolves around the fight for survival of a father and his daughter, not only in the face of a zombie apocalypse, but also as part of your typical Korean elbow society. 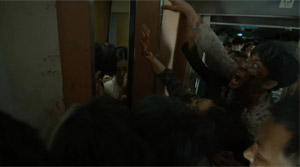 Those who remember the MERS-outbreak in South Korea 2015 will inevitably realize that the government's course of action in a crisis is denounced in this film as well. People are treated according to their social status and the different cabins of the train are after all an allegory for the dividing walls between the different social classes. Who's interesting in this respect is the story's hero since he actually isn't one at all. He is a fund manager who feeds on the suffering of others and puts himself before anyone else. When he tells his daughter that she should be acting like this, too, if she doesn't want to be left out, we know exactly what kind of an individual we are introduced to here and why his wife wanted a divorce. His daughter is all too aware of that as well so that the relationships within the family have to be called difficult at best. 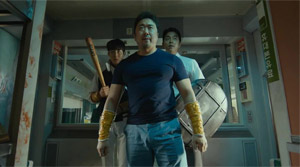 However, in this respect there are no big surprises. The main character inevitably grows as an individual caught in the dangerous situation he and his daughter find themselves in, and he ultimately becomes a better person. Concerning the characters director Yeon doesn't paint such a nihilistic picture as in his animes. Still, the film's tone at times turns out to be quite dark. You also shouldn't expect all of the protagonists to survive until the credits roll. Gong Yoo ("The Suspect", "Silenced") delivers a solid performance, but Ma Dong-Seok ("Deep Trap", "The Five") steals the show, not only because of his action scenes, but particularly because of his character being such a kind soul, even the more since he has some great chemistry with his wife, embodied by Jeong Yu-mi ("Manhole"). 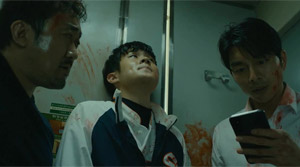 The initial build-up of the tension level is also executed quite well. There are obvious hints, shadows, police and firefighter sirens and when the first victim on the train mutates things happen in quick succession. Since the zombies aren't of the slow kind, but rather remind us of those from "World War Z", there are also a few action scenes. Yet, it's a bit strange why the zombies bite their victims. Apparently, they don't need them as some kind of food. But maybe this aspect was just factored out for the film to be less gory. Since the amount of time passing between infection and mutation is extremely short, the movie also remains pretty fast-paced here as well. Accordingly, a small mistake almost instantly has consequences, which naturally means that the passing of some characters is dealt with in a compressed manner. 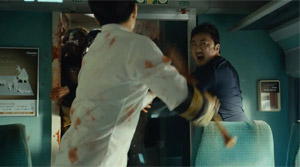 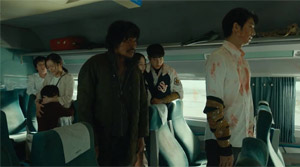 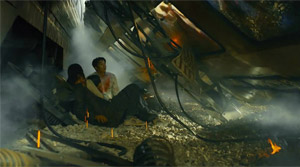 Of course, there are also masses of zombies tripping over each other or clinging to a driving train like a carpet and thus clearly have been generated at the computer. Yet, those special effects are done exceptionally well. Almost better than in quite a few Hollywood productions. The suspense level and the action deliver and the drama around the characters also gets some room to unfold, although you should be warned that the different individuals are at best written mediocre. In the end, the question is if the hype surrounding "Train to Busan" hasn't been so big that you eventually only can get disappointed. The answer is that you get pretty much what you expect here. That's the film's strength as well as its weakness. Maybe director Yeon has taken a more reserved stance towards his topic, putting the social criticism more into the background. After all, it's pretty obvious that this flick is aimed at a broader audience. Still, what remains is an absolutely well achieved zombie flick.