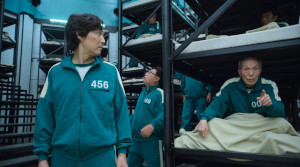 Story: Ki-Hoon (Lee Jung-jae) lives with his mother again and owes some gangsters a huge amount of money. He tries to get out of his unpleasant situation by betting on horse races. He even wins for a change, but then the money gets stolen from him by the pickpocket Sae-byeok (Jung Ho-yeon), and thus, as is the case every year, he cannot buy a proper birthday present for his daughter, who lives with his ex-wife and her new husband. In a subway station, somebody then persuades him to participate in a game about life and death. The prize money would clear up all his financial worries for good. The players are taken to a secret location and have to live together in a large community hall. But most of the game's 456 participants do not stay alive for long. Already in the first game, it becomes clear what kind of cruel reality Ki-hoon finds himself in: Whoever loses a game, dies. Ki-hoon's childhood friend Sang-woo (Park Hae-soo) also takes part in the games, and the man spots the pickpocket Sae-byeok there too. But the problems from the outside world no longer matter in this new reality the players find themselves in. Each participant risks everything in the hope of winning the enormous prize money. In addition, the policeman Joon-ho (Wi Ha-joon) snuck into the group of men monitoring the games, because he is looking for his missing brother. Doing that, he takes a high risk, because the employees are also monitored the entire time. 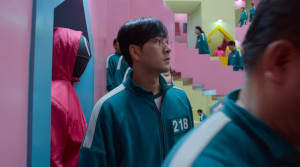 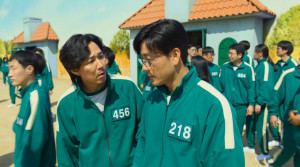 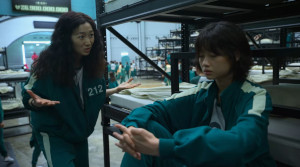 Review: "Squid Game" has been on my watchlist for a while now and was actually supposed to stay there a little longer, but for some reason the series has become the most successful series on Netflix overnight, and the hype in the media was already starting to get annoying. Therefore, I had to move the series up in my list in order to answer the question whether the hype is actually justified. The short answer: No. The slightly longer answer: It is an exciting and extraordinarily well-staged series, but lovers of Asian flicks or manga enthusiasts will immediately react with a disgruntled "But that's all just a rip-off!" The fact that "Battle Royale" was not only copied by "The Hunger Games" but has even led to a whole new game genre, with "PUBG" and "Fortnite" being the main representatives, does not change the fact that the parallels are still too obvious here and that you immediately feel reminded of "Kaiji: The Ultimate Gambler" as well. It is simply too apparent that these sources were used as reference material, and then I found out that series creator Hwang Dong-hyuk even says in an interview that he already had the idea for the series in 2008, when he read the mangas "Battle Royale" and "Kaiji"... 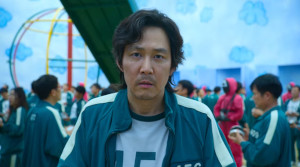 Interestingly enough, there is even supposed to be a law suit, because the movie also steals from "As the Gods Will", although the parallels to that movie are not quite as obvious to me. And last year, Netflix already had a thematically similar and also very successful series in its program with "Alice in Borderland". So why, of all movies and series, is there such a hype about "Squid Game" in particular? In addition to simply being lucky, it could be because of the bright colors, the overalls, and the (PlayStation symbol?) masks that the series uses. Because with that, the series also reminds us of "Money Heist", another enormously hyped series. Movie critics continue to shower "Squid Game" with compliments concerning its critique of capitalism, but in fact, the series does not do anything different than all the other already mentioned movies/series/mangas - perhaps it does so a little more obvious, which should actually be a point of criticism, though. But with the average Netflix viewer, everything has to be spelled out a little more noticeable perhaps, and in that respect, "Squid Game" is indeed pretty streamlined. 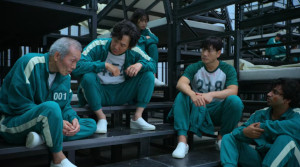 Lee Jung-jae ("Deliver Us From Evil") plays the lovable loser absolutely convincingly. But his background story about a daughter, for whom he somehow never manages to be there, seems quite hackneyed. During the games, he sometimes takes a backseat for the supporting characters, so that you occasionally even forget that he is supposed to be your anchor. Especially Sae-byeok, the debut role for model Jung Ho-yeon, manages to win over the audience with her story about her brother and her escape from North Korea. Even the elderly man in the group adds some color to the show. Besides, there are at least three other interesting characters, which were fleshed out more than the main character. The story about the policeman, however, often seems like an unnecessary addition, with which the makers wanted to create a little suspense outside of the games as well - and this impression only gets stronger when you see in which direction the story is ultimately going. 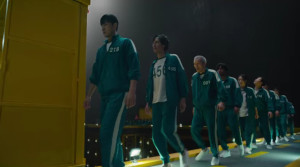 But it is actually the games, which are a big disappointment. They are simply a few children's games, and, except for maybe The Glass Bridge, they can hardly be called interesting. At least if you have the strategically more demanding, but still easy to understand games of a "Kaiji: The Ultimate Gambler" in mind, a movie/manga from which the director/writer also got the general idea for the glass bridge... Suspense is mainly created by the fact that the participants' own lives are at stake here, and by the way the characters interact with each other. For some it may be shocking how cruel the consequences of losing a game are, but as already said, that's only the case for those who aren't familiar with "Battle Royale" etc. In some areas, however, "Squid Game" deserves every word of praise it received, and that includes its visuals, the sets, and the costume design. The bright and gaudy colors stand in stark contrast to the gray reality and also seem deliberately out of place, because you actually don't get a carefree game in the style of a "Takeshi's Castle" whatsoever. The sets are sometimes pretty impressive, especially the labyrinthine stairs and corridors which always look as if M.C. Escher himself created them. 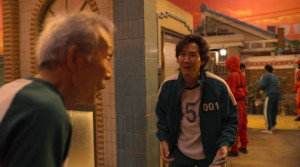 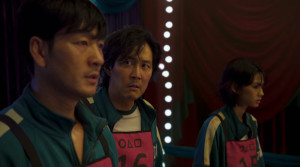 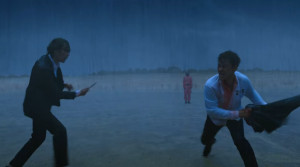 Connoisseurs of Korean cinema can also look forward to a few surprising cameos. There is no doubt that "Squid Game" is aware of its strengths and knows how to play to them. The series is always gripping because the stakes in the games constantly remain high. But you should not expect any surprises - apart from a small revelation, which you can already see coming, though. Unfortunately, the series fails to deliver a nice conclusion. Is the second half of the last episode actually supposed to be a bit thought-provoking and meant to stress out the principle of "dog eat dog" mentality as well as the lack of benevolence in a capitalist society? Be that as it may, it seems implemented a bit clumsy, and the ending in general is not really convincing, probably because the director also wanted to leave the door open for a possible sequel. In the end, "Squid Game" just lacks exactly the kind of depth that so many critics claim to see in this series. But since the show also manages to appeal to an international audience, despite its few small cultural peculiarities, you can hardly do anything wrong here. Still, if you already know some of the aforementioned genre works, you should lower your expectations by a lot.