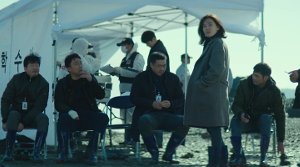 Story: Jeong Han-soo (Lee Sung-min) and Han Min-tae (Yoo Jae-myung) are both detectives and used to be partners. By now, however, there is nothing but bad blood left between the two. Han has not made any progress in the search for a missing teenager, and when she is finally found chopped into pieces, Jeong is now also tasked with the search for the killer. The two therefore start to compete with each other because the one who finds the killer first is almost certain to get the position as the new captain. Jeong soon suspects a priest-novice as the killer because the teenager was singing in his choir. However, Han soon proves that his rival is on the wrong track. He is still no closer to finding the killer when suddenly Choon-bae (Jeon Hye-jin) contacts him, who used to be Jeong's informant and after three years in prison is now free again. She tells him that she knows where the teenager was killed. Nevertheless, Choon-bae uses the get-together with the detective to kill the drug dealer who put her into prison in the first place, and she uses the policeman's gun for that. Jeong wants to arrest her immediately, but she offers him a deal, saying she tells him the place where the teenager was dragged to if he covers up the murder of the drug dealer. The detective agrees, and the ensuing mission in an apartment building occupied by Chinese gangsters actually leads them to the killer, but it also ends in a catastrophe that has serious consequences for the detectives. But who will blame whom in the end? 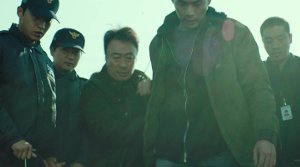 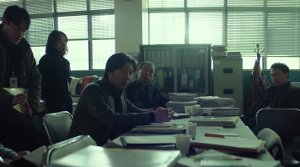 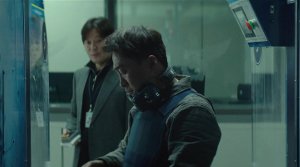 Review: "The Beast" has an interesting story to tell. At first, the movie seems like a dark thriller about a gruesome serial murder, but soon this aspect of the story fades into the background and the two detectives step into the spotlight. Even though they are both looking for the killer, their contempt for each other and the prospect of a promotion force them to cross lines which, in hindsight, should not have been crossed. This creates a really gripping thriller with a complex story, in which it's hard to tell right from wrong. This makes the movie quite extraordinary and unpredictable. In the end, however, "The Beast" cannot be called innovative, as it is actually a remake of the French thriller "36 Quai Des Orfevres" by Oliver Marchai. 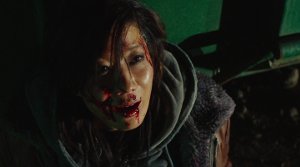 "The Beast" is dark and violent, but the latter only when it is really necessary and in a subtle way. Accordingly, we do not get to see the cruel murders and tortures directly, but showing the torture chamber is enough to stimulate our imagination. Actually, the whole trick of a dark thriller should be to make you feel sick without really showing a lot of blood. And this flick knows exactly how to do it. Its color palette is kept pretty dark, and Lee Jeong-ho ("Broken") as the director knows how to create scenes in which the tension seems palpable. This applies not only to those moments with the killer, but also to those in which Jeong has to worry that his rival might find something out about the murder he covered up. Most of the time, the game that develops between the two detectives is quite nerve-wracking and it is the movie's main focus. 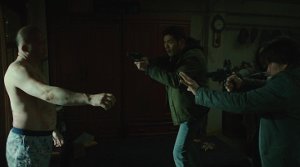 Yoo Jae-myung has hardly had any big roles as an actor, at least not in major productions, and unfortunately, his portrayal in "The Beast" is also somewhat reserved, which may also be due to the fact that his character was written a little flat. With Lee Sung-min ("The Spy Gone North") things seem a little different. He's allowed to bring a fairly wide range of acting to the screen, and his character was also written a bit more complex. In general, Detective Jeong is not a bad person, but he is always put into situations in which he makes the wrong decisions or actually has to make the wrong decisions. Taken out of context, scenes like those in which he hits the drug-addicted informant might make him look like a monster, but things are a little more complex than that. Nevertheless, one of the movie's biggest problems is that, over time, Jeong's character is moving away from what we first sympathized with. However, this also means that there is an interesting character development happening here. 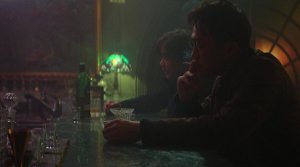 The fact that the two detectives compete with each other creates a lot of suspense, and of course they both have something to hide, even if Jeong clearly has the bigger secret, which is why the viewer shares the thrill with him most of the time. The stressful situations created here also ensure the dense atmosphere and vice versa. The pacing is also consistently high. The moral questions that arise in the course of the movie also make sure that, despite the ambivalent characters, you keep being interested in the story, and you often have to ask yourself how things actually got this far. The story is also full of new developments and so it's always gripping. A large number of new parties and truths keep showing up until everything results in a complex web of connections. 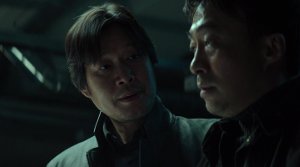 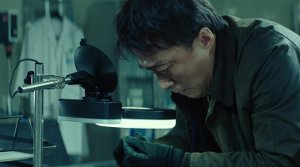 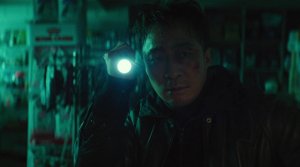 This, however, brings us to my biggest point of criticism. "The Beast" seems pretty cluttered at some point. What was first entertaining, gets stressful after the director tried to squeeze the umpteenth sub-story into the main plot. After a while, it's hard to identify a real structure, everything just seems a little too chaotic. Since I don't know the source material, I can only assume that the director wanted to bring in some of his own ideas in order to create something more original. However, the fact that this is a Korean production is always obvious. The tone, on the other hand, is somewhat strange, in a positive way, and this is probably due to the French original. For me, that is one more reason to recommend this rather exciting thriller, but those who know the original movie could be a little more critical about it. This may explain why the movie didn't get much love, but it's actually a very recommendable thriller.