Story: Ji Dong-cheol (Gong Yoo) is a former North Korean spy who witnesses his mentor being killed in South Korea. Dong-cheol manages to secure some important data and from that moment on he is on the run from the National Intelligene Service and leading investigator Kim Seok-ho (Jo Seong-ha). Actually, Kim is a corrupt agent who is responsible for the murder himself and makes use of a group of North Korean defectors in order to get his hands on the data. Drill sergeant Min Se-hoon (Park Hee-soon) is assigned the task of chasing after Dong-cheol and doesn't have a clue about the secret agenda of his boss Kim until Dong-cheol makes him question his assignment because of his actions. But Dong-cheol doesn't really care about the data he carries around and is in fact seeking revenge on the man who killed his wife and child by order of the North Korean government. However, since the whole NIS is after him he seeks the help of reporter Choi (Yoo Da-in), who wants to help him uncover a conspiracy within the secret service.

Review: "The Suspect" bears the heavy burden of being released at a time at which there is simply a surfeit of espionage thrillers from South Korea. Indeed, the movie may have the asset of turning its tonal focus from drama to action, but that doesn't hide the fact that the screenplay is just mediocre and at times comes up with some strange ideas making it as generic as the protagonists of the movie. The insufficiently drawn characters also lead to us not being able to relate to them. At least action fans won't find much to complain about since the movie delivers so many chasing scenes that they could easily have been used for two movies. But even here it shows that "The Subject" moves on safe ground and oftentimes takes a few pages out of its big brother's book - Hollywood. 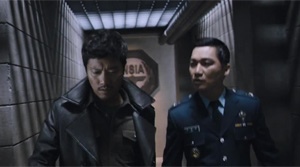 Espionage stories are always ludicrously complicated, it seems. With thousands of twists. But on a closer look those stories always follow the same modus operandi. Thus, it's not that big of a deal if you lose track of what's going on considering all the names and organizations introduced to you. Who the good guys and the bad guys are and what aims they strive to achieve is in fact pretty much self-explanatory because of obvious character archetypes. There is the good guy who, because of certain circumstances, became a North Korean killer, the bad guy who has his secret agenda and the good guy who is a tool of the bad guy until he realizes it. There is no extra room for character development, but at least this trio sometimes is good enough for creating some suspense. 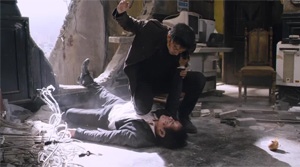 But unfortunately this is just sometimes the case since we have seen everything here before already. "The Berlin File", "Commitment" and "Secretly Greatly" sing the same tune and often shifted to unneceassary drama. "The Suspect" is more going down the path of "The Berlin File" and delivers equally big-scale action, but completely refrains from implementing drama, if you overlook some very small scenes. That's actually not a bad thing because too much drama has often driven movies of the genre into the ground. But with "The Suspect" there just is no reason to be captivated by the events unfolding on screen. The camera and the pacing all insinuate suspense, but there actually is none since the characters are simply blank sheets.

References to "Sympathy for Mr. Vengeance" don't help either. There is no sympathy for the protagonist on our part since he tenaciously follows his goal and keeps a straight face all the way through. Sure, North Korean spies have been trained to show no emotions, but that doesn't make things more interesting for the viewer. Gong Yoo ("Silenced") can't get out much of his role either, but he at least performs all of his stunts himself. And the fights are really quite respectable, if it weren't for the camera often being too close to the action or shaking too much. More convincing acting-wise is Park Hee-soon ("The Client") as a hero with some faults. Individuals like the reporter only seem to be relevant to keep the plot going forward. 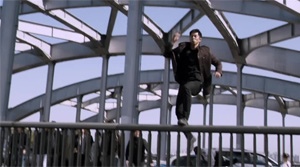 The way the plot develops is, as in many espionage thrillers before, governed by coincidences and inconsistencoes. Particularly towards the end there are so many plot holes, small and big ones alike, becoming apparant that it just makes you laugh. At least the action scenes can in fact make up for it. There are countless car chasing scenes or chasings over rooftops. But sometimes they drag on to such a degree that they aren't that captivating anymore either. At times there is no suspense at all, but the action-heavy soundtrack still wants to make us believe that there is. It's the well-known problems of the genre that sends director Won Sin-yeon ("Seven Days") into a tailspin. "The Suspect" is big and made for an international audience. Won doesn't create anything out of the ordinary, but it's still solid stuff for action fans, even though his flick feels a bit too long with its 137 minutes.