Story: Eun-ah (Kim Seon-ah) leads a happy family life with her husband and her daughter until one day serial killer Jae-wook (On Joo-wan) enters her house. Eun-ah loses her family and barely survives, but is henceforth bound to a wheelchair. She has completely lost her will to live and only manages to hang on by savoring her thoughts of revenge. Then she comes up with an idea. Since she has a rare blood type she wants to donate her organs to desperate people who in return are supposed to help her find the serial killer. Through her former doctor Cheol-min (Jeong In-gi), who is looking for a donor for his daughter himself, she finds an engineer expert (Sin Jeong-geun), an investigator (Lee Cheong-ah) and a man for the tough work (Ma Dong-seok), who after some persuasion and out of desperation are willing to help. At first they aren't acting in concert, but with time the team turns out to be pretty capable. However, they underestimate Jae-wook, who now turns from hunted to hunter...

Review: It has been a while since we saw a convincing revenge thriller out of South Korea. You will still miss some originality in "The Five", but at least the movie does more things right than you are used to see from its competition these days. Partly this may be because in respect to the atmosphere the film steals from the gems of the genre, sometimes in a subtle way, at others in a very obvious manner. This somehow creates a familiar feeling and manages to remind you of the "good old days" when Korean cinema was at the pinnacle of its success and didn't just consist of simply internationally modernized and solidly produced genre fillers that are brought to screen nowadays. And for this we are thankful, indeed. 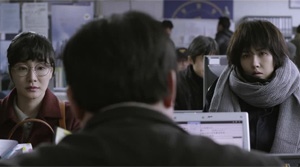 Without a doubt it isn't just the composition of pictures that often remind us of Park Chan-wook's revenge trilogy and particularly of "Sympathy for Lady Vengeance" but also the soundtrack seems to be a homage to latter movie. But apart from this "Princess Aurora" is quoted as well. Director Jeong Yeon-sik initially published his story as a webcomic in order to bring it to screen as his debut later on. The plot itself is your typical revenge story, which merely comes along with the genuine plot fact that the helping hands are bought through organ trading. Apart from that the villain lacks depth, but to make up for it he is at least... despicably evil. Eun-ah's fate is told with enough rigorousness so that you can instantly sympathize with her sadness and anger and actually want the villain to be strapped to a rack and see him suffer. 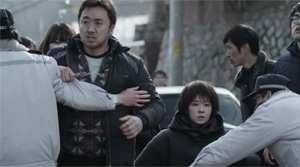 Yet, "The Five" is also full of giant plot holes. This starts with the fact that time and space is crossed with different speed. Just as it fits the story at the moment. At times it even seems that the villain is able to teleport! Next to that there are numerous chance happenings that at some point play in Eun-ah's favor and at other times put her in danger. However, that's something you already expect from a thriller. After all, our expectations have become low over the years. Yet, it is still ridiculous when Eun-ah constantly states that she should have started taking her vengeance on her own from the very beginning and wants to dissolve the group. Eun-ah is bound to a wheelchair and although she finds herself helplessly on the ground on several occasions she somehow seems to believe that she is invincible.

She isn't just megalomaniac, but apparently also a magician. During the finale she prepares traps - the domino gimmick at the start already hints to this in a very obvious way - which she only would have been able to set up if she could walk! Not taking into account that she didn't have any time for preperations, of course. But this is easy to forgive since the ending is satisfactory and because the atmosphere is dark and bloody. "The Five" is never outright gory, but there is enough bloody violence hinted at, that faint-hearted people will find themselves feeling sick. And even though the twists may be obvious they still fulfill their purpose very well and create tension. Despite a running time of a little bit over two hours there never is any unneeded space. 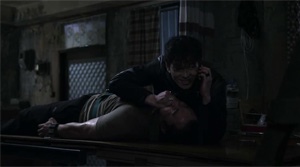 Although there is a gritty atmosphere and high tension this thriller wouldn't have worked out that well if it weren't for Kim Seon-ah ("She is on Duty", "My Name is Kim Sam-soon") bestowing the necessary tragic and despair on her character. The secret hero of the story is Ma Dong-seok, though (constantly being cast in supporting roles, as in "Rough Play"), who oozes out a natural and strange sort of coolness, which leads to the fact that we are instantly emotionally involved by his marriage life that is only touched upon. Consequently, the two nice characters manage to make the movie a pleasant and entertaining ride. With its dark colors and a fitting atmosphere "The Five" also makes everything right for thriller fans.