Story: The Jade Emperor (Chow Yun-Fat) is at war with the Demon King (Aaron Kwok). The Jade Emperor manages to win the final battle, but heaven is destroyed in the process. Thus, goddess Nüwa sacrifices herself in order to restore heaven. However, one part of her body lands on earth and Sun Wukong (Donnie Yen) is born from it. Sun Wukong is taken in by a master and lives under his teachings. Soon he knows all techniques of heaven and the master has to let him go. Sun is looking for a way to become immortal or at least be able to revive someone else. But on his search he is unintentionally wreaking havoc in the world. The Demon King, who with his tribe lives in exile, eventually hears a prophecy that tells of Sun being the key to break open heaven's gates and defeat the Jade Emperor. While the ruler of heaven starts to take a shine to the Monkey King Sun Wukong, the Demon King is already devising a plan how to pit Sun against the Jade Emperor and start a new war.

Review: The problem that goes hand in hand with high-fantasy movies is always that there is put too much emphasis on special effects which can lead to a deadly outcome for those suffering from epilepsy. "The Monkey King" is proving this once again. As you might have guessed already there is also 3D and an ear-battering soundtrack involved. Just your usual blockbuster entertainment for the whole family. And especially for the children. They will also have less of a problem that director Cheang Pou-Soi made a minimalistic story with lifeless characters of a great source material. You can never feel emotionally involved by the movie because of that and particularly the dialogues are very weak. In addition, you also get the feeling that the focus has been lost on several occasions during the shooting of the film. 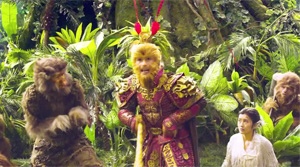 The reason for this may be that almost the entire movie has been shot in front of a green screen, thus the actual movie was created at the computer during post-production. Even though this might be obviously the case with most fantasy flicks it also leads to them lacking soul. Despite big production values (80 mio. dollar!) the special effects aren't convincing either. Or let's rather say: There are some that are easy to the eyes and then again there are some that you would have expected to see from a computer game ten years ago. Apparently, there wasn't any money left for certain special effects (e.g. the dragon horses...) or no time. Naturally everything revolves around divine beings as well as nature and animal spirits which is why "The Monkey King" inevitably features fairy tale elements. But to get just an action flick in which we are simply bombarded with special effects every single second is just sad. 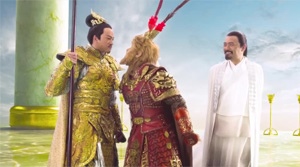 However, director Cheang Pou-Soi is well-known for always delivering a surprise. In a good sense ("Dog Bite Dog", "Accident") and a bad ("Shamo"). This time he took a page out of Hollywood's book and with all the money he had at hand he made a forgettable action blockbuster, wasting the talents of everyone involved. There is Chow Yun-Fat ("The Last Tycoon"), who at least manages to show some sort of charismatic indifference and benevolence, as well as Donnie Yen ("Bodyguards and Assassins", "Special ID"), who isn't allowed to show his great martial art skills within all the special effect overkill. Strangely enough he deserves some kudos in respect to his acting since he is playing Sun Wukong with the necessary chaos element of playfulness without showing the kind of arrogance that we are normally used to see from the monkey king or Yen himself.

So thumbs up for Donnie. But what did they do to the story? The filmmakers took a small negligible part of Wu Cheng'en's "Journey to the West" and deprived the characters of any drama. Many things are, at best, merely hinted at, Aaron Kwok's ("Floating City") villain should have been made use of more efficently and the supporting characters are completely insignifcant. Only Sun arouses some interest and so there are at least a few scenes in which we get a nice feeling of fantasy-loaden entertainment. All in all the movie seems to be targeting a younger audience, though. At least this would explain the simplistic story and the aimless dialogues. Of course the movie ends exactly where things start to get interesting, but a sequel is already in the making, so we just need to wait... 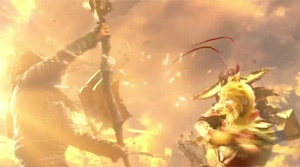 Still, should the second installment turn out to be as overloaden with special effects and epic fights, which don't look cool, but simply unmotivated, you should seriously consider watching Stephen Chow's "Journey to the West: Conquering the Demons" as a sequel instead, which is by far the better movie anyway. "The Monkey King" is only recommended to those who always wanted to see the Balrog from "Lord of the Rings" fight against King Kong. Or see it if you don't want to miss Chow Yun-Fat with at times blue, at others green contact lenses. Apart from that there is nothing here that could keep you glued to your screen. The movie has its strongest moments when there are no special effects involved. Maybe this should be a wakeup call for Chinese moviemakers to finally focus on story-telling again.