Story: Chen Shaobai (Tony Leung Ka-Fai) organizes a revolution that is supposed to overthrow the Qing empire. Although he constantly tries to talk businessman Li Yutang (Wang Xueqi) into joining his cause Li's help is limited to being the organisation's money source. However, the most difficult task Chen hasn't faced yet, as he finds out that Sun Yat-Sen is about to visit the country in four days to hold important talks about overthrowing the empire. At the same time there are rumors spreading that a group of assassins, led by Yan Xiaoguo (Hu Jun), is assigned the mission to use this opportunity and kill Sun. Chen now has to assemble a ground of trustworthy men and women who protect Sun during his visit. Apart from the rickshaw-puller Deng Sidi (Nicholas Tse) the team is also composed of beggar Liu Yubai (Leon Lai), who are both acquaintances of Li Yutang. Li's wife (Fan Bingbing) also talks her former boyfriend Shen Chongyang (Donnie Yen) into lending a helping hand and to Li's regret his own son (Wang Bo-chieh) has an interest in fighting for his country, too. Sun's arrival marks the signal for a deadly hunt.

Review: In many respects "Bodyguards and Assassins" isn't what you probably expect it to be. But maybe this even makes the movie a better one. Sure, it would have been nice to see Donnie Yen in a big budget flick taking out all of Sun Yat-sen's assassins on his own, but let's be honest: At some point it would be getting tedious. What the movie represents instead is a surprisingly well working drama that manages to supply its incredible amount of protagonists with at least implied background stories. This has the effect that the fate of the revolutionary figthers in fact moves us and that there is an apparent tension at all times. Consequently, it's easy to forgive that the action scenes turn out to be rather unspectacular. 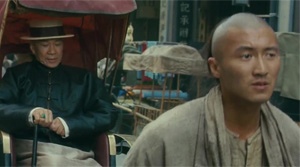 With its big budget of 23 million dollar "Bodyguards and Assassins" doesn't need to hide behind Hollywood productions. Most of the money has been put into the sets which depict Hong Kongs central district at 1906 and is neatly taken apart at the end. But the costumes and last but not least the many familiar faces will have devoured big parts of the budget, too. You seldomly get to see a movie with so many popular actors involved. Coming closest to a lead actor is Wang Xueqi ("Reign of Assassins") who also manages best to carry the emotional scenes. Next to him Tony Leung Ka-Fai ("Tai Chi Zero") plays a major part as well. But what about our Donnie, I hear you ask?! 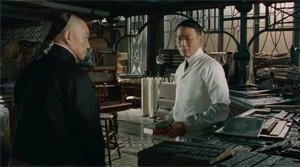 Interestingly enough Donnie Yen ("Ip Man") doesn't play such a prominent role in the movie. Or maybe I should say his role is as important as that of the 10-11 other major characters in the film. What's remarkable is that every one of the characters, be it the beggar played by Leon Lai ("Fire of Conscience") or the rickshaw-puller embodied by Nicholas Tse("The Viral Factor") are all supplied with their own little story which are build up during the movie's first half. Every individual has his/her own dreams and wishes and wants to seem them realized in a better future. For this they are willing to sacrifice everything. That this will lead to quite a few heroic deaths in the name of the revolution already becomes very obvious during the introduction.

A better and a more democratic China is what people wish for and to actually hear that in a Chinese co-production in such a direct way is quite surprising indeed. By the way, you shouldn't be someone who reacts allergically to patriotic moments if you consider watching this film because there are more than just one or two of them here or to be more precise: The whole drama is build on the premise that the protagonists want to die for their country. When it actually comes to the inevitable demise it is accompanied by slow motion and a quite well accomplished soundtrack by Chan Kwong-wing and Peter Kam (probably the best Chinese composers at the moment). That might sound hackneyed, but the groundwork of the character introduction at the beginning pays off here. However, for the movie to work out for you, you have to accept that the first action sequence isn't before more than one hour into the movie. 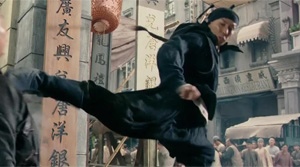 When it comes to the action things start to get disappointing. The fight between the beggar and a legion of soldiers should have been epic, the whole atmosphere oozes out epicness, but far from it. Donnie Yen can't deliver anything extraordinary either, especially not since he has to work with wires. At least there is a parkour-like chasing scene through the impressive exterior set. Even though the action doesn't deliver the expected awesomeness it still serves a purpose, and particularly on a drama level the movie manages to be convincing. With its running time of 138 minutes the film easily could have become tedious, but the characters are drawn three-dimensional enough for us to warm up to their stories. There is never any doubt that "Bodyguards and Assassins" is supposed to be a commercial flick and despite this making the film a bit shallow the end result turns out to be a surprisingly well working action drama.