Story: For years now Zilong (Donnie Yen) is part of a gangster organisation that is lead by boss Xiong (Collin Chou). What only a handful of people know is that Zilong is actually an undercover cop. The individual subordinate leaders of the triads are constantly at each others' throats, but Zilong knows how to stand his ground. Since he has become a person of trust for boss Xiong he is sent to Nanhai in order to meet with Sunny (Andy On), an aspiring gangster boss who Zilong once instructed how to become a gangster. Zilong is supposed to find out whether Sunny really killed one of the bosses of the triads during a handover or not. Zilong's superior at the police, Zhang (Ronald Cheng), also sends him to his last mission. He must find enough evidence against Sunny to put him behind bars. Having arrived at the Mainland he works alongside female detective Fang Jing (Jing Tian), who soon turns out to be of great help, even though Zilong clashes with her on several occasions as his approach in the case doesn't seem anything like real police work.

Review: No doubt, expectations were quite high with this Donny Yen flick. After all there was to be expected similarly balls-to-the-wall action as in "SPL" or "Flash Point". In this respect "Special ID" isn't really that much of a disappointment, but it doesn't come up with anything extraordinary either, contrary to what was the case in the aforementioned titles. Nonetheless, it has to be stressed that the action is clearly the driving factor of the movie. Those who expect anything else like for example a gritty Hong Kong thriller with a good story and well written tragical characters should read somewhere else. Because in those scenes where the action doesn't pump the adrenaline through your veins you might find yourself yawning. But come on, be honest: Did we expect more? 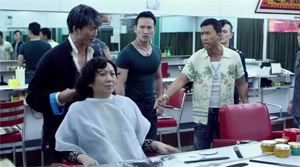 So what does the story offer after all? Nothing, to be precise. We have seen all of this before. Zilong has been undercover for such a long time that he is about to lose his identity. He has to realize more and more that it is almost impossible for him to find a way to get his old job back. But his inner struggle doesn't serve as some kind of drama that could have enriched the movie. Actually, it just serves as a chance to tune out and take a break from the action. Donnie Yen is more charismatic in his role than what we are used to see from him the last few years, particularly his scenes with Tian Jing have some sort of buddy flair, although he easily could be the actress' father. Luckily, there hasn't been added a love story, too. It wouldn't have surprised anyone... 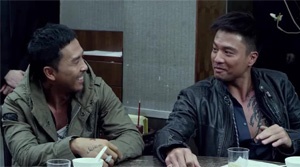 The shameless self-staging of Yen is something we are already accustomed to, but in "Special ID" the now 50-year old actor digs deep. And that's understandable, after all he wants to show as much of himself as possible, being at the long due peak of his career. Accordingly, his action scenes count among the movie's highlights. Especially well done are the brawls in which he fights off whole groups of gangsters. The showdown on the other hand falters, although Yen once again implemented more holds, throws and wrestling techniques in his choreography. Andy On (sadly destined to be a supporting actor for all times, as in "Unbeatable" or "Mad Detective") is a suprisingly good choice as the villain and in a few scenes he is also allowed to show his speed. Since the finale inevitably has to measure up to the one in "Flash Point" it is the source of some of the aforementioned disappointment.

On an interesting note, there were some problems that arose during the movie's shooting so that Vincent Zhao, who originally played the villain, backed out. The reason was that his role became more and more shallow with every revised version of the script. Andy On makes the best of it and "Special ID" has to struggle with thin characters at all ends anyway. However, it's a bit odd that Colling Chou hasn't been put in a fight against Yen. At least as a small treat for all the fans of "Flash Point". Instead someone else turns out to be a surprise in the fighting scenes. Delicate Tian Jing ("Police Story 2013") actually manages at the end to convince in her action scenes - there are quite a few of them - and this even though you can't really buy the tough action heroine from her at first. After all she drinks her coffee from a Hello Kitty-mug! 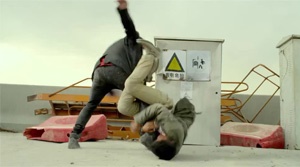 A car chasing scene towards the end deserves some special words of praise as it stands as the movie's actual highlight and particularly Tian Jing can show her strenghts here. Bottom line, the action is just right in general, but irritatingly the film's tone is very positive despite the merciless action. The at times wound up soundtrack and the badly written quarrels between Zilong and Fang Jing, which most likely are supposed to be funny, leave no doubt about that. Ultimately, director Clarence Fok ("Iceman Cometh") wanted to shoot a merciless Hong Kong thriller that also features some all-sunshine and feel-good atmosphere. Naturally, this strategy doesn't pay off, especially not since the story is a complete mess. Still, those who just care about the action might find themselves getting their money's worth.