Story: Young Cheng Daqi (Huang Xiaoming) wants to go to Shanghai in order to escape poverty and become someone big. His girlfriend Ye Zhiqiu (Feng Wenjuan), however, dreams of a career as an opera singer in Beijing. One day Daqi is falsly accused of murder and ends up in prison. There he meets army officer Maozai (Francis Ng) and with his help he escapes. Now he heads to Shanghai where he soon works under the honorable gangster boss Hong Shouting (Sammo Hung). Daqi meets his girlfriend again after a few years, but when she realizes what he does for a living she splits up with him. His loyalty and skills help Daqi to gain more respect in Hong's organisation. Eventually he even saves his boss' life and becomes his sworn blood brother. In 1937 Daqi (Chow Yun-Fat) rules over Shanghai alongside Hong, when suddenly Zhiqiu (Yolanda Yuan) turns up again. She is married now and her husband is said to have a list of underground rebels that Daqi is supposed to get his hands on by order of Mozai. Furthermore, political tension in the country doesn't really leave a doubt that Japan is soon about to attack China.

Review: This big budget flick with its top cast will make you shout out loud in panic during the first few minutes. That is when you read the name Wong Jing. The man who shot such gems like "My Kung Fu Sweetheart" and "Love is a many stupid Thing". Wong is known for shooting cheap comedies with as little effort as possible, but - and he deserves at least this much credit to his filmography - every now and then he also hits the mark, as "God of Gamblers" is proof of, also with Chow Yun-Fat in the lead. Maybe it's the extremely low expectations involved when hearing the name of director Wong Jing, but "The Last Tycoon" really isn't bad, which is also thanks to neat action and a star-studded cast. 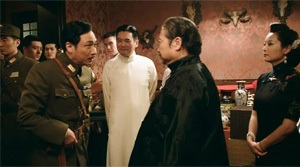 The movie is produced true to the motto "a little bit of everything", takes pages out of the books of many other Hong Kong movies concerning its story, "Shanghai Grand" comes to mind for example, and in the end connects the individual parts to an epic action saga around the rise of a gangster boss. The first half of the film is told parallely in the present and through flashbacks and thus is unnecessarily accompanied by reminiscences worked in way too early and an overused score. But even later on we get to see those reminiscences, which count among the movie's biggest flaws because of the way they are expatiated on in order to increase the drama level. At the same time this also leads us to the love story, which is put into the foreground in a too forced manner. Actually, the romantic story isn't that bad really, surely nothing original, but the honest way Daqi is wavering between his feelings is comprehensible. 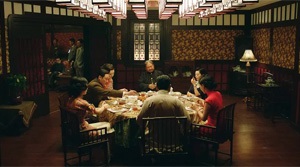 Nevertheless, a little bit less love story would have been advisable. That is because "The Last Tycoon" is peppered with numerous characters that all seem interesting. Strangely enough you can also relate to every one of them in some way. Despite the huge amount of individuals you never need to ask yourself who that is supposed to be on screen right now. For this Wong Jing deserves some credit. Also well done executed are the action sequences. Rather towards the beginning it is a shootout in a church, which actually should look absolutely cliché-loaden concerning all the HK-action movies that came before, but it doesn't - there is just some historical inaccurateness about the choice of the firearms. The mass brawls of the gangsters don't seem unnecessarily contrived despite the use of slow motion either.

But that's not all. In the last third of the movie Shanghai is bombarded by the Japanese, after all the story covers almost three decades, and there are numerous well executed explosions to be seen of which apparently only very few were created at the computer. The bombing seems to be taken right out of a war movie and certainly most part of the budget was devoured here. The epic scale the movie reaches because of the destruction of a town shouldn't be underestimated, but the development of Daqi's character and of several other ones certainly add to it as well. Next to Chow Yun-Fat ("The Assassins", "Confucius") there is particularly Francis Ng ("Turning Point 2", "Infernal Affairs 2") as the inscrutable villain who deserves some laudatory words. Of course, Sammo Hung's involvement also isn't a downside. 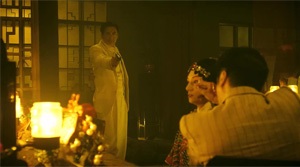 Apart from the great actors there are the fantastic sets that catch your eye. There is a lot of love for detail to marvel at. In regards to the crammed story, which covers love, brotherhood, betrayal, patriotism and other subjects, there is the constant fear that at the end "The Last Tycoon" won't show any coherence. But this is much less the case than it actually should have been the case. At some points the movie takes some sharp turns and all in all it drives over a bumpy road at times, but in the end everything still fits together in a way. Action, romance, drama - there is everything here. If it weren't for the very intrusive soundtrack by Chan Kwong-wing (and sadly there are a few ballads as well) there even would be less to criticize. At the bottom line "The Last Tycoon" is a guilty pleasure because a lot of what you see is just a rehash of things you already watched on screen - but it is still a good, entertaining movie and more importantly the best one of Wong Jing in years!