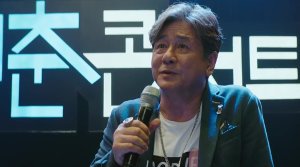 Story: Byeon Jong-gu (Choi Min-sik) has already been Seoul's mayor twice and now starts his campaign to be reelected. He tries to be close to the people and at one of his promotional tours, the young editor Park Kyeong (Shim Eun-kyung) criticizes him for exactly that reason and she says he should do more for the city instead. Byeon thinks that the young woman might be helpful in his campaign and he brings her in on it. The election is managed by Shim Hyeok-soo (Kwak Do-won), who has his own agenda, though. In the meantime, people from Byeon's party worry that in the long run the mayor might be going after the presidency. Byeon's only serious competition in the election is Yang Jin-joo (Ra Mi-ran), who Hyeok-soo tries to discredit right away by anonymously sending a fake video about Byeon to the campaign team so that he can accuse them of a smear campaign. Park is responsible for the video and she is not only a puppet of Byeon's team but also unintentionally feeds important details about the mayor to the reporter Jay (Moon So-ri). When a giant hole opens up in Seoul during construction work and some of the workers die, Byeon's poll numbers drop rapidly. But he still has some aces up his sleeve. 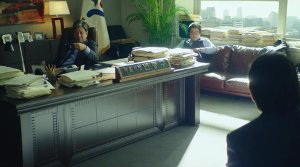 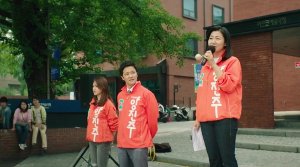 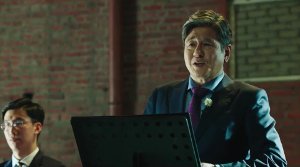 Review: By now, South Korea has produced numerous movies dealing with political scandals and intrigues, for instance "The Truth Beneath" or in a sense even "The King". Hardly surprising, if you look at the events within the country. After president Park Geun-hye's impeachment due to corruption, you have to ask yourself wether a movie like "The Mayor" is really enough to show an appropriate picture of today's political corruption. Admittedly, everything seems respectable when it comes to the movie's craftsmanship, but in the end, the director misses taking a stance in whatever kind of way. It almost seems as if he simply wants to tell us that life is unfair and with the right amount of cynicism, one could have managed to fuel the audience's anger and make them want to do something against this injustice. But for that, the movie just lacks foundation. The main problem is the portrayal of characters, which are not written very well. 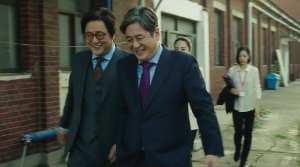 Choi Min-sik ("Heart Blackened") plays the mayor, who wants to be reelected. It seems as if he really intends to keep his promises and wants to change something in his city. The fact that he employs Park, played by Shim Eun-kyung ("Psychokinesis"), for his campaign, even though initially she speaks out against him at one of his events, shows that he wants to improve his politics. Although Byeon remains obscure, he seems to be a multi-faceted character about who we expect to learn more. Unfortunately, you will search in vain for the promised character traits which blur the lines between good and evil. At some point of the movie, we realize that there is simply not more to Byeon than meets the eye. We get to know that his ambition is to make a bid for power, but why exactly and what meaning power has for him remains in the dark. This inevitably makes the thriller crash and burn. 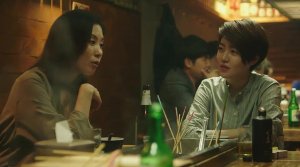 Who are we supposed to root for, anyway? Byeon is deceived by some of his people, however, he displays the same behavior. The various smear campaigns make it impossible for us to trust anybody on screen anymore. The direct competition might be a little bit less corrupt, but is it enough to vote for the lesser of two evils? Therefore, we do not really care about the election's results. The people lose anyway. How does Park fit in all this? Isn't she supposed to be the audience's anchor? Somebody that holds justice in high esteem and serves as an appealing figure for us? Instead, it is completely unclear why she chose to go into politics and what her goals are. In addition, Shim is upstaged by Choi Min-sik and other supporting actors far too often, so that her role keeps to the sidelines. Such a shame in a movie, which would have needed some sort of counterpart to Byeon. 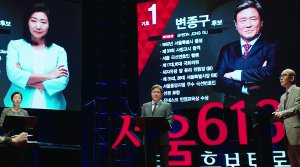 Kwak Do-won ("Steel Rain") plays the mayor's counselor following his own agenda which makes him the traitor on several occasions. Acting-wise Kwak performs nicely but similar to Choi he does not have any common theme to his character. The dialogues are mostly too simple and predictable, as well. This includes a scene in which Byeon runs into somebody with his car and then sweeps it under the rug. There is never really any suspense because Byeon's fate does not affect us all that much. Therefore, in the end the story seems worn out and unoriginal. Nevertheless, there is enough thrills so that the movie with its 130 minutes running time never gets boring, as there are always new developments unfolding. But we've seen it all before; we do not delve into the characters deep enough to be able to call the movie a character study and in addition, we simply scratch the surface of the meaning of power and corruption. 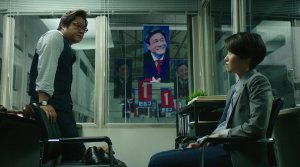 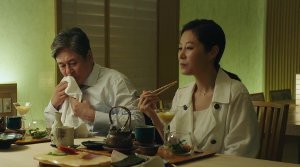 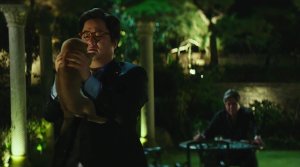 The movie stays interesting long enough because of its obscure characters like the reporter played by Moon So-ri ("Little Forest"), but when she makes clear that everybody is playing fast and loose, nothing can really surprise us anymore. This is a particular failure of the thriller because a dark, hopeless movie about deceitful people, especially in politics, would have presented a good premise to really affect us. But director Park In-je ("Moby Dick") is simply always harping on the same string so that the movie misses the kind of depth a politically oriented movie would have deserved. The message that all politicians are corrupt and think of nothing but themselves is just too dull to fill an entire movie, which also presents a cast that is clearly unchallenged. So in the end there is nothing left but a decently respectable political thriller.