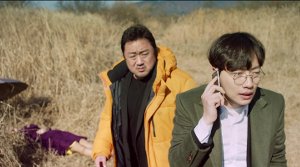 Story: Seok-bong (Ma Dong-seok) is a history teacher who dreams of finding a treasure one day. That's why he is searching for two Buddha statues that used to be in his family's possession some generations ago and then just disappeared. Joo-bong (Lee Dong-hwi) is his brother and works for a company which wants to build a highway through Andong. Because this is his parents' birthplace, Joo-bong suggests to build the highway around the city, which costs a lot more money and thus is why he is now afraid of losing his job. Eventually, the brothers receive the news that their father died. Even though the two haven't seen each other since their mother's death and actually have nothing to say to one another, they both go to the funeral. On their car trip there, they run into the mysterious woman Oh Ro-ra (Lee Honey), who then suffers from amnesia, but doesn't want to go to the hospital. She says goodbye to the brothers, who finally have to face their relatives and acquaintances. Seok-bong was never able to forgive his father for refusing to pay for his mother's treatment, whereas his father didn't want him and Joo-bong at their mother's funeral because they broke with the family. So, there is actually no reason for them to attend the memorial ceremony. But then Ro-ra turns up again and tells Seok-bong that the treasure he is searching for is in fact hidden somewhere on his father's property. She also tells Joo-bong about a way to keep his job and even get promoted. The two brothers start to plot against one another and the family. But who is this mysterious Ro-ra, anyway? 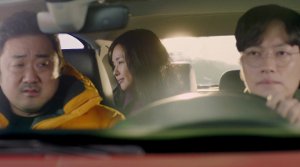 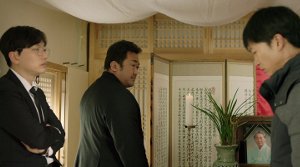 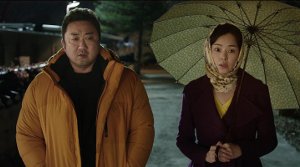 Review: "The Bros" is an interesting comedy because it is based on the director's eponymous musical, and even though there is not a single song in this movie, the source material is quite obvious. Because a lot of things seem as if they were made for the stage. This especially includes the dynamic chemistry between the characters as well as the scene structure. Quite often, we get the impression that specific moments had to be improvised. But what is particularly fascinating is the juxtaposition of old Confucian values and modern-day values. Of course, this contrast is what the humor builds on. However, the movie has some problems, which are caused by the two protagonists, who generally have a certain kind of charm, but they just don't work as appealing figures. Both act out of selfish reasons and want to sell their hometown for their own well-being. 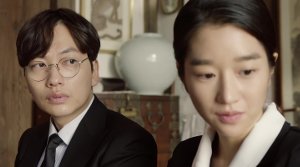 Ma Dong-seok ("Champion") portrays the brother who wants to follow his dreams and shows complete disregard for everything else. He takes out a loan to buy expensive equipment, because he hopes to find a treasure, and we realize that this is not the first time. There are various flashbacks which show us that he always asked his family for money. His brother also criticizes him for that, because his parents always fulfilled their first-born's wishes, and he himself was therefore not able to study abroad. However, Seok-bong has already forgotten about all of this. So, it is not that easy to actually feel sorry for him and the situation he is in. And his accusations towards his father at his mother's funeral cannot be taken seriously, either. How can he blame his father for not wanting to spent money on hospitalizing his mother, when he was the one who took all the family money, in the first place? 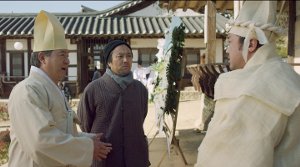 However, Seok-bong doesn't have it easy either. As the first-born, it is his duty to carry on the family's important tasks and to take over the role as the head of the family. In a traditional Korean society that means a lot of responsibility. Moreover, he needs to know the family tree and all its branches inside and out. The important role that family plays in a Confucian society is worked out in a very powerful and funny way in "The Bros". All characters wear traditional clothing almost the entire time and the movie practically only takes place during the memorial ceremony. To break free from this world and find a way into modern society is not an easy task, but the sons did it, and now they have trouble following when one of the elderly men only talks in polysyllabic Chinese idioms or insults them in the same manner. 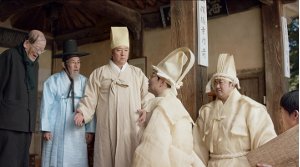 Lee Dong-hwi ("Extreme Job") plays the other brother who was always outshined by Seok-bong. Even though we also lose sympathy for him when he wants to sell his hometown, Joo-bong and Seok-bong have good chemistry, which manages to carry the movie. The humor is also well-done, even though you need a little bit of background knowledge on Korean culture and tradition to really understand everything. Some puns also get lost in translation. However, female director Chang You-jeong has a nice hand for a brisk pacing and therefore she always manages to keep things entertaining, so that the movie is in no way inferior to a stage production when things come thick and fast. Especially quirky Ro-ra, played by Lee Honey ("Heart Blackened"), reminds us of the character in a play who seems essential for solving the conflict. 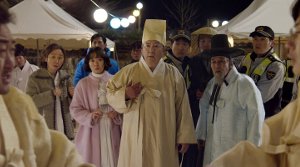 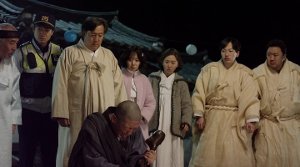 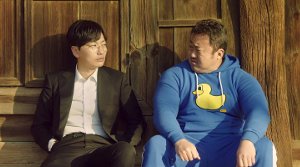 Of course, the tension between the brothers dissolves at some point and they start to grow closer. However, towards the movie's end, the focus changes too much to two other characters. This may lead to some drama-heavy moments which are necessary to give "The Bros" a satisfying ending, but it also slows the movie down too much and seems a little bit out of place. At the same time, it is supposed to revive sympathy for the two brothers. In some respects, the director is successful at that, but the movie's ending is definitely not its strength. Instead, it's the clash of two completely different worlds that makes the movie entertaining and fun to watch. In addition, the charismatic characters, including some supporting characters, are pretty convincing. Therefore, "The Bros" may be interesting to those viewers, who are interested in a setting of rural countryside full of Korean tradition, but don't want to get too much of a culture shock.