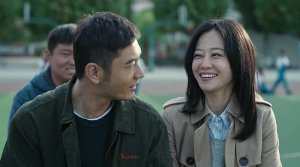 Story: Jiang Liwei (Huang Xiaoming) is captain at the fire department and makes a fatal mistake during an operation when he sends a rookie into a building to check the supposedly extinguished fire. It ends in a disaster and the rookie loses his life. Jiang is demoted and his colleague Ma Weiguo (Du Jiang) gets his position. His wife Li Tang (Zhuo Tan) and his son also suffer from the fact that Jiang is blamed for the death of his colleague. But nobody blames himself more for what happened than the firefighter himself. Therefore, he seeks redemption and when he receives an emergency call concerning an oil pipeline at the harbor, he immediately goes on site. There was a large explosion after the oil had ignited in the pipeline. However, soon an even bigger disaster could happen as the fire now heats up a gigantic oil tank which could blow up any moment. The pipelines can't be shut down electronically anymore and doing it manually seems impossible because you would have to go directly into the inferno. But eventually, things get even worse. If the tank explodes or the fire spreads, some tanks with toxic substances could be damaged and the contents would be released. In this case, all inhabitants of the large city could be in grave danger... 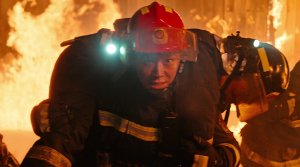 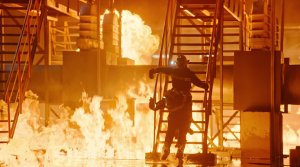 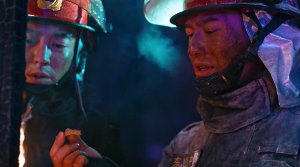 Review: As a movie, "The Bravest" is a really impressive spectacle. The title already suggests that we are dealing with a major advertisement for the fire department, and it should be clear that China in particular can easily keep up with America when it comes to pathos in this film genre. But is that a bad thing? No, because it would be unfair to think that. Of course, we are dealing with heroes, people who sacrifice themselves for others, and this goes hand in hand with a certain amount of melodramatics. Sure, there is a soundtrack which underlines scenes like that and oftentimes it gets a little bit too much. But did you really expect something different? This disaster movie has some weaknesses, but most viewers will just be interested in the fire and the explosions. And that's where China accomplishes something impressive. A real Hollywood spectacle with a surprisingly big budget, which leaves nothing to be desired when it comes to action. 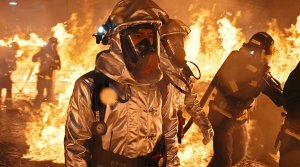 Generally, you are used to getting bad CGI from China in abundance, just look at "Shanghai Fortress", but even though there is some computer-generated fire in "The Bravest" here and there, it is anything but embarrassing. Or at least you can condone it because you mostly get practical effects. Real fire, impressive explosions, which you are probably not used to see from China, and flames, which almost seem alive. It should be pointed out, however, that there are some questionable decisions made in the movie. While the sound effects are pretty good and build up some nice momentum, the movie tries to give the fire a voice which sounds like that from a beast. This turns out rather clumsy because it is not that subtle. And this clumsiness can also be found in other areas of the movie, for instance, when it comes to the drama. 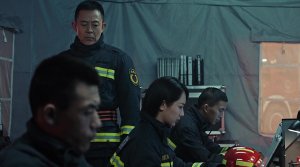 Of course, the story's hero has made a tragic mistake and he tries to put things right, no matter what the cost. However, Huang Xiaoming ("The Sniper") does not have much to work with here. All characters are just archetypes, and making it worse ist that the movie actually takes its time trying to give the hero more color through the supporting characters. Moreover, there are some subplots thanks to Jiang's wife and his son. Otherwise, you would only have a story revolving around the firefighters and nothing about the characters' private lives. However, those scenes don't really add any value to the movie. Jiang does not get any more three-dimensional and his family just as little. The only thing it adds is a little bit more drama. Same goes for Du Jiang's character ("Operation Red Sea") and his relationship to his father. 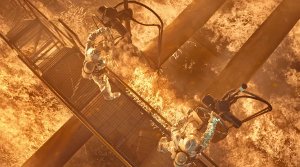 In a movie like "The Bravest", drama is something inevitable, but the countless slow-motion scenes accompanied by an "epic" soundtrack is simply more than we can take. According to his own statement, director Tony Chan, who up to this point only shot forgettable romantic movies, wanted to put great emphasize on human relationship, but what we get here is just kitsch. And pathos. Because the story is based on a book about the catastrophe at the Xingang harbor and the moviemakers wanted to commemorate the heroes, you can forgive the latter, especially as there is no real nationalistic tone hidden somewhere. Nevertheless, it gives the film a B-movie charm, even though it otherwise manages to play in the highest ranks due to its wonderful action and its impressive explosions. This is accentuated by a weird scene in which the firefighters hold a moment of silence while the fire keeps burning, despite the fact that just minutes ago they stressed how every second counts. In addition, you don't actually know who the person was that sacrificed himself. Even though the firefighters keep repeating the name, we don't know anything about that individual. 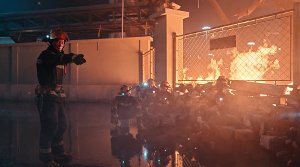 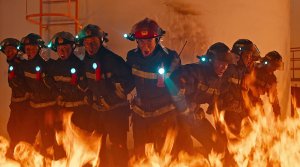 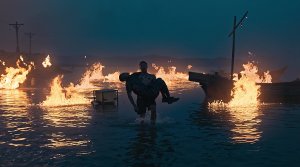 And there are really stupid scenes nonstop as well: There is someone who drowns and nobody even tries to revive the person. With so many firefighters on location, you would think that at least one would start a resuscitation procedure! Or a gigantic staircase is loosened from the tank by gallantly beating on one single screw! Whatever, at least the pacing is good. Some calmer scenes allow you to take a breather from the action and the movie's main attraction is still the fire, which devours gigantic sets, and in HD this looks even more impressive than in classics like "Backdraft". In conclusion, this means you should probably take the melodramatics with a wink, not expect too much of the character portrayal and just have some fun with the action and the fantastic explosions. In any case, "The Bravest" used its budget in a productive way. This definitely deserves some praise.