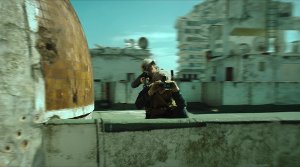 Story: In the North African state Yewaire a civil war breaks out and the foreign population is evacuated. Amongst them are also some Chinese people. When terrorists abduct a Chinese citizen, the Chinese Navy sends out Jiaolong, a special team led by Yang Rui (Zhang Yi). Even on their way to the terrorists' headquarters, the unit encounters strong resistance by the terrorists' organization Zaka. Eventually, Yang and his team pick up the Chinese-French reporter Xia Nan (Hai Qing), who is in the country because she received a tip that the terrorist leader kidnapped a man who possesses a large amount of yellowcake and knows how to build a bomb out of the uranium compound. They want to get Xia Nan to the ship and evacuate her along with the other Chinese. However, the special unit is already too deep in the interior of the country and got isolated by the Zaka. The only way to go is straight ahead into the terrorists' headquarters, where the Chinese hostage is being held, and to use a very small window of opportunity to get the unit extracted. Yang has no other choice but to take the reporter with them, even if she doesn't want to accept the fact that the mission is only about rescuing the Chinese hostage taken by the terrorists. But all this proves to be almost impossible. There are first casualties and the situation seems to become more and more hopeless... 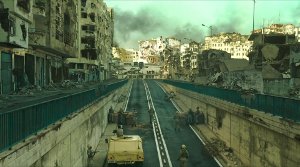 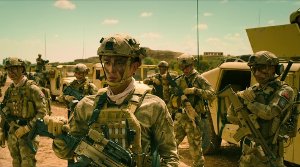 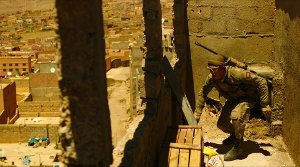 Review: After Dante Lam turned his back on Hong Kong cinema and devoted himself to the more lucrative mainland, you had to wait and see what to expect from his artistic works. Against all odds, "Operation Mekong" was an exceptionally well-done action movie, which came along with a considerable budget. Once again, Lam has to somewhat sell himself a little bit to get an impressive budget, but 70 million dollars is a really good deal, in this case. Interestingly enough, "Operation Red Sea" is not really the kind of propaganda work you would have expected. Certainly, there are some mandatory scenes full of national pride, but in general, you can't say that this movie is an advertising film for the Chinese Navy. The brutality of war and the extent of cruelty are shown in such detail that the movie gets a rather dark vibe and therefore makes Lam's work more of an anti-war movie. 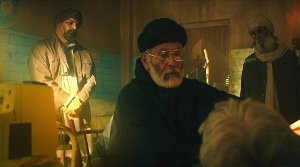 Nevertheless, you don't really feel reminded of Lam's "Operation Mekong" - which isn't related to this piece of work at all - but rather of China's most successful and national-pride-packed action blockbuster "Wolf Warrior 2". This shouldn't be surprising, as the movie's story is based on the Chinese Navy's same mission in the Yemen. At the beginning, you might think that it will be hard to share the thrill with the characters because they remain rather flat, but this changes, at the latest when we get to the urban warfare. The character outline remains rather superficial but it's the breathtaking action that captivates and entertains. The amount of action is almost ridiculous. There is one explosion after the other and gunfights happening all the time. But so much action is bound to get tedious, isn't it? Normally, yeah, but this action flick's strength lies within its creativity, which keeps things interesting. 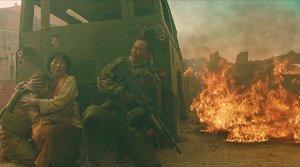 But to be clear, the story itself is not really inventive, the action sequences are. We just get a lot of variety and the highest level of quality of all the things we might expect from a movie of this genre. For one, Dante Lam achieves that by not generating the explosions via computer imagery. Cars are blown up for real, houses are getting bombed to pieces and tanks are racing through the desert. In addition, the director makes use of a surprising amount of blood. Actually, not so much blood as it is severed body parts. Lam focuses on the impact of war, its bombs etc. This adds a shock factor, which you might recognize from anti-war movies. Considering all the deaths, you have to ask yourself whether one single Chinese woman is really worth it all. Of course, behind all this lies the message that terrorists shouldn't mess with China, but Dante Lam also seems to put in some critical notes. There are no heroes in war. 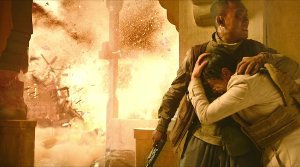 And indeed: In this movie, you will search for heroes in vain. Zhang Yi ("Dearest") most likely would fit into the hero-category the best, but the pain the Chinese military unit has to endure, simply has nothing to do with the patriotic solo action of a super-hero-like soldier. The focus lies on the unit as a whole, which admittedly robs us of a point of reference, but it also gives us a more realistic image of a military mission. Except for the epic gunfights and explosions, which clearly cry out for being regarded as first-class action cinema. It's simply incredible how much action they packed into "Operation Red Sea", and even at the end, we get scenes which make us speechless because director Lam went the extra mile. It's also impressive, how many gadgets we are presented with in this movie. The unit has top-notch equipment but still seems to have no chance against the terrorists. 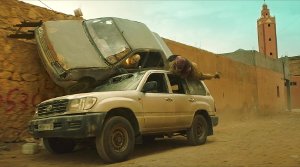 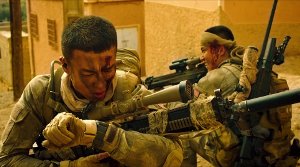 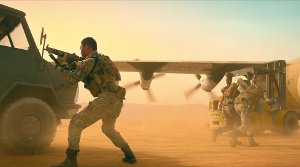 But the team is also small enough to raise our interest. There are also some attempts to differentiate the characters a little bit more from one another and this works at least within the action scenes, for instance, when the focus lies on the snipers. With its 138 minutes running time, the movie could have easily turned out rather tedious, but this is not the case at all. Even after the supposed finale, there is another showdown. The desperate situation and the severed body parts make us remain glued to the screen in shock. There is no time to take a breather and therefore you can say without a doubt that this is the biggest and most epic action movie of the year. As a critic, you could be inclined to deduct some points for the propaganda and the national pride. But Dante Lam dodges this sort of simple labeling by putting an almost nihilistic-seeming anti-war movie on the screen. Even the patriotically captured Chinese flag can't change this. After watching this movie, I doubt anybody in his right mind would want to join the Chinese Navy.