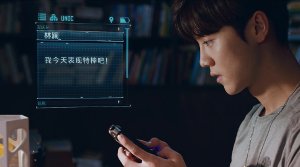 Story: In the not so distant future mankind discovered a new energy source. Taikonauts brought back Xianteng from an asteroid and this source of energy soon replaced all other methods of energy production. However, this caused another problem for humankind. Aliens have come to Earth and are especially interested in Xianteng. They have already wiped out all major cities which stored Xianteng and took the energy source with them. Shanghai is the last fortress on the planet where Xianteng is still available. The inhabitants are constantly living in fear and under a ginormous shield, while the military forms a special unit defending the city against the mothership which frequently shows up. One of the pilots in training is young Jiang Yang (Lu Han), who is secretly in love with officer Lin Lan (Shu Qi). However, he doesnt have the courage to confess his feelings to her until, someday, it could be too late. The mothership reappears and after the citys shield is damaged the United Nations decide not only to send interceptors, but they also want to use a giant cannon to destroy the mothership. The secret weapon surprises the aliens, but doesnt destroy them and they escape. Because of the vast amount of energy which was needed for the cannon there is an energy fluctuation which makes the shield around Shanghai very instable. The citys inhabitants are sitting ducks... 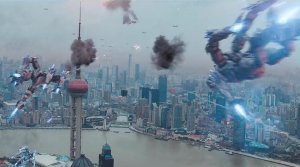 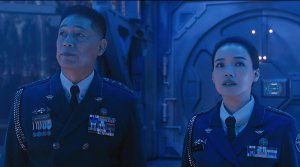 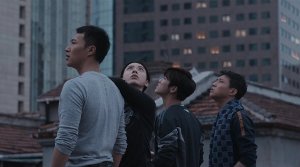 Review: What exactly did the makers of "Shanghai Fortress" expect? Of course, the original idea was to draw on the enormous success of "The Wandering Earth", a movie which cannot exactly be called a masterpiece either, but which started a serious sci-fi boom in China. Director Teng Huatao brought Chinese viewers back down to earth. Film studios want to make money and take the line of least resistance. This means a lot of special effects, loud explosions and well-known stars. The rest falls by the wayside. But Chinese audiences do not put up with everything, even if some fantasy movies may convey that impression. "Shanghai Fortress" was punished with numerous bad reviews. The reason for that is an exceedingly bad script and mediocre acting performances at best. 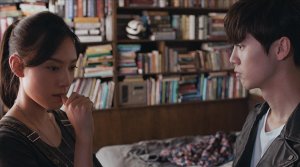 The fact that people spoke so critical about the movie and that it was a big flop at the box office even forced the director to apologize for the movie. Author Jiang Nan, whose novel was the source material for the movie and who co-wrote the script, also had to offer his apologies to appease disappointed fans. But what is this sci-fi movies problem? Certainly, it cannot be the fact that we just get a mindless action flick, because Hollywood produces a lot of those and they sometimes can even be fun to watch. Mainly it is the movies lack of identity. Because even if it is supposed to be a military sci-fi movie, you sometimes get the feeling that you are watching a romantic movie. This doesnt make sense because to work as such, it would have needed a lot more character drawing instead of the rough sketches we get of the protagonists. 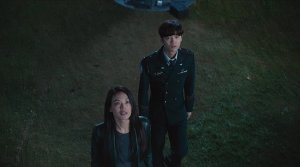 However, Shu Qi ("The Adventurers") does deserve some positive words. She makes the most of her flat character as the strict military officer and in some moments, she manages to give her role a human and also feminine touch. And then there is Sun Jialing in a supporting role as a female pilot who also manages to breathe a little bit of life into the story. But all this is absolutely irrelevant as choosing Lu Han in the lead was a complete mistake. At first, I thought an androgynous hero like him could be an interesting contrast to the testosterone-driven superhero, but in the end, he seemed too boygroup-ish. And, oh man, can you be more ignorant? The protagonist actually is an ex-member of the Korean-Chinese boyband EXO! Great, but after all, Lu Han still cant act. Moreover, it wouldnt have hurt if he had considered a change of image with his almost 30 years of age. 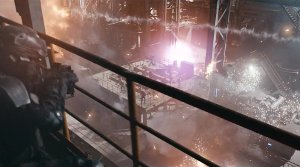 In addition, it seems somehow inappropriate that the love story involves a young man who is evidently 20 years old and an officer who is portrayed by a 40-year-old actress. Admittedly, both actors look ten years younger than they actually are, but the love story is still strange. But maybe this is just the case because it isnt getting anywhere. There is no progress and apart from some text messages there is nothing happening that could create some kind of chemistry between the characters. The military unit is supposed to be a well-oiled machine, but the secondary characters are not convincing and the mandatory deaths therefore mostly dont affect us all that much. The script doesnt offer anything acceptable when it comes to the story or character portrayal either. The dialogue is mostly awful too. At one point someone even makes fun of some cheesy lines, only to get even more cheesy himself in a monologue later on. 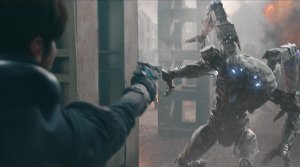 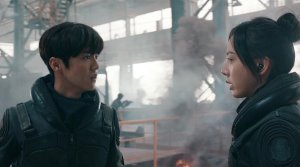 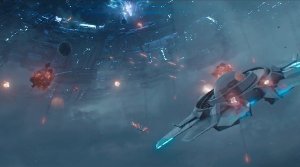 Nevertheless, critics sometimes praised the special effects. While the destruction of the city mostly looked rather pleasant, I initially hoped that the portrayal of the alien aircrafts looked so bad because it was just a simulation. But later on, everything else looked equally cheap. Because the majority of the 57-million-dollar budget supposedly did not go into Lu Hans pocket, you have to ask yourself, where it did go? Certainly not into the special effects. But also not into the script, because the most important military facilities are guarded by soldiers with ineffective weaponry, and one cheap epilogue after another bores us to death after the dull action fizzled out. Maybe there are some emotional moments, but "Shanghai Fortress" doesnt work as either a sci-fi movie or a romance. Therefore, it is a flick which you can ignore without giving it a second thought. You are better off watching the more thought-provoking "Last Sunrise".