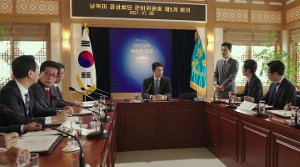 Story: South Korean President Eom Cheol-woo (Jung Woo-sung) doesn't have it easy. He is expected to take part in a military exercise between Japan and the US, but he does not want to impair the gradually improving relations between his country and North Korea as well as China, which is why he decides not to participate in the exercise. However, he is put under a lot of pressure by the US, so he has to take part after all. China doesn't like that at all, while some South Koreans have a problem with a president, who is opening up too much to the North. President Eom wants to drive the peace negotiations forward, which is why he, North Korea's leader (Yoo Yeon-seok) and the American President Smoot (Angus MacFadyen) meet in North Korea's port city Wonsan. Negotiations are not going well, but things get even worse when General Kwak (Kwak Do-won) initiates a coup, kidnapping his own country's leader as well as the presidents of America and South Korea and dragging them onto a submarine. President Eom suspects that China is behind all of this. However, the dispute between the Great Powers is focused on the island of Dokdu, to which both North and South Korea as well as Japan have territorial claims. Perhaps the political background of this crisis is much more complex than expected, and Japan also seems to have a hand in the game. But the decisive power does no longer lie with the representatives of the three countries, because they are kept as prisoners on the submarine and are therefore deprived of their powers. Now, they have to work together if they want to get out of this precarious situation alive... 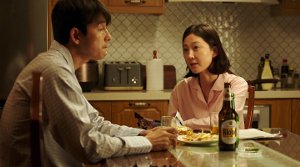 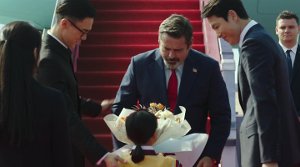 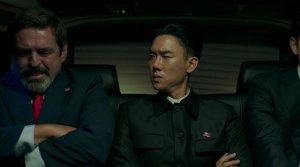 Review: After the huge success of "Steel Rain" it was only a matter of time until a sequel found its way to the screen. But since the original movie dealt with a self-contained story, whose characters can hardly be involved in another crisis like that without it becoming completely unbelievable, the director just chose to make this movie a sequel in name only and in regards to its common themes with the first installment. That way, he is able to let the main actors return and create a new story about the North/South conflict, which unfortunately, seems a little too complex and loaded this time. But once more, we get a real Cold War feeling, not least because a good part of the story takes place on a submarine. As you might have expected, this also means that we get a lot of good action. Yet, it takes some time until we get there. First, you have to get through a pretty long introduction explaining the tensions between the various countries. 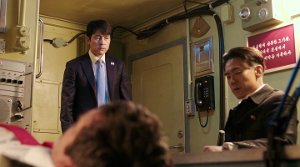 Even if you don't know all that much about the diplomatic or tense relations between the countries involved in this crisis, you won't have any problems following the events, because the movie thankfully tells the audience everything it needs to know. Is it too much, though? Perhaps, but on the other hand, this is also necessary, because the story - like in the first part - wants to be particularly authentic and complex. After all, the dependence of the countries on each other is a very confusing construct, and this is what the moviemakers want to do justice here. The fact that "Steel Rain 2" is strongly anchored in reality can also be seen in the ruling powers portrayed in the movie. Jung Woo-sung ("Innocent Witness") plays the South Korean president with a domestic streak who seems rather approachable. In general, the movie could certainly not have been made if the social liberal party of Korea would not be in power at the moment. 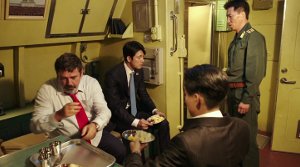 The leader of North Korea, played by Yoo Yeon-seok ("Mood of the Day"), does actually not look like a monster. As a viewer you even start to understand why North Korea wants to stock up on nuclear weapons, what role the US plays in this, and what China and Japan have to do with this. After all, the truth cannot be pushed into categories like good and evil. A real highlight, however, is Angus MacFadyen, who, of course, actually plays Donald Trump. He certainly does not try to simply imitate him, instead he creates his own character, but quite often a certain way of talking bursts out, which reminds us of the President, or he simply portrays a disgusting arrogance, coupled with a directness and crudeness that sometimes even seems sympathetic. MacFadyen is the secret star of the movie, which is particularly impressive as Western actors in Asian productions usually turn out to be a disaster. 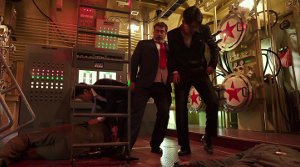 The submarine was chosen as the set for the second half of the movie, because it is a very tight space where the three leaders get locked into a small cabin together. Therefore, they have to deal with each other and realize that this international crisis would have been avoidable if they had simply talked to each other. Luckily, the movie spares us the usual pathos or love for your country. Korean productions normally try to turn on the viewer's waterworks, which makes the story seem a little cheap. But not this one. Instead, we even get a lot of humour that mainly takes place between the three leaders, revolves around the English language and the mirroring of the real leaders, but also contains some toilet humour. With the American president, this doesn't seem too far-fetched either, but sadly, that also means that the movie briefly crosses the line to slapstick at some point. 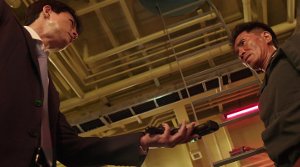 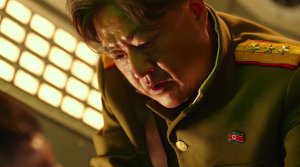 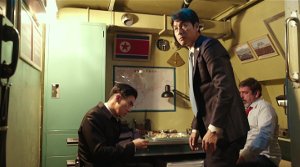 As you might have expected, towards the end of the movie there is also a lot of action involving the submarine. Kwak Do-won ("The Man Standing Next") plays the villain and causes an international crisis, including exciting submarine battles. Obviously, there also has to be a shooting on the submarine itself, but it is actually the tactical battles which manage to impress. Of course, everything becomes a little predictable during the showdown, even though we are supposed to believe that things could turn out differently. But watching an espionage thriller like this you don't really expect anything else. The mixture of Cold War scenario, suspense, action and humour works. The majority of critics still think that the first part is better than the second, but in my opinion, director Yang Woo-seok has created an equally good sequel. The movie even has a message that doesn't come across too schoolmasterly, though. Accordingy, we get an all in all well-achieved blockbuster here.