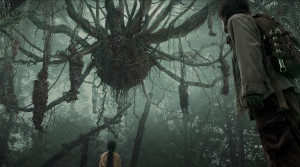 Story: Yang Hao (He Shengming) and his daughter Yuan Yuan (Zhang Mingcan) are on the run. Not so long ago, plants mutated after an experiment, they adapted too well to the new environment, and at the same time, developed a collective memory. So now, there is a huge root system under the earth's surface that repeatedly breaks through the ground and takes over entire cities. For humans, life on earth is no longer possible, as nature has reclaimed it. The only thing that still manages to push the plants back at least a little is UV light. One day, Yang Hao is woken up in this post-apocalyptic world by plants engulfing his daughter and her bed in the abyss, but when he follows the GPS signal of her watch, he finally finds her. However, he stands no chance against the plants that have surrounded them. Suddenly, a special military unit turns up and the two are saved. Next to the leader of the team (Yu Rongguang) and other members, Li Mo (Mi Luo) and Ye Yan (Michelle Ye) are responsible for bringing a substance to a specific place where it can be injected into the roots of the plant system. It is humanity's last hope to reclaim earth. Since the unit's technician died while rescuing Yang Hao, and because Yang has proven to be an excellent engineer, he is asked to help with the mission. Yang Hao immediately says no, but his daughter on the other hand would like to save the world... 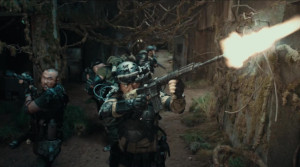 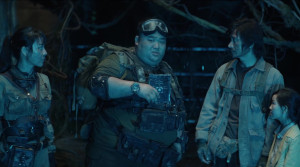 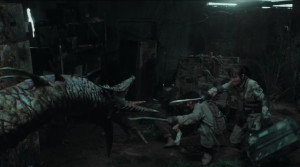 Review: You could get the impression that it has become more quiet around the Chinese sci-fi genre. But in fact, it's only blockbusters like "The Wandering Earth" that have become rarer. The slightly cheaper productions of the genre are actually not that scarce. "Last Sunrise" was already able to proof that you don't always need to spent millions to tell a fascinating sci-fi story. Because of its premise, "Restart the Earth" interested me for a while now. But it is also a movie that throws around quite a lot of special effects, which might turn out slightly unconvincing in a production made for the streaming service iQiyi, as it does not necessarily have much money. So, my biggest fear was that the bad special effects might affect the scale to which you can be absorbed by the story. 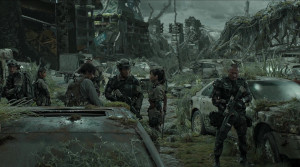 Sadly, this fear turned out to be justified in some sequences. But this is not the movie's biggest weakness, as some effects actually even look surprisingly decent. So basically, there are two different types of special effects. For example, there are the backdrops: the large city and its skyscrapers overrun with vines, and streets reclaimed by nature, complete with plant-covered cars, etc. Those who have always hungered for a movie adaptation of "The Last of Us" and who can't wait to see what HBO makes of it, will definitely be satisfied here. The practical effects as well as the sets show a lot of love for detail, which I personally would not have expected in an iQiyi production. In addition, the backdrops don't look too much like green screens, and even when they do, they have something slightly picturesque about them, which is actually quite pleasing. 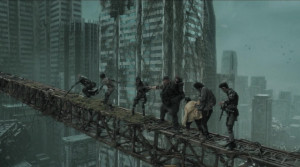 Of course, the plants that have developed their own consciousness can only be created through CGI, especially since they sometimes even destroy entire skyscrapers as "green waves". And that's where you get the other kind of special effects which only make you roll your eyes. The movie's sometimes epic scale would basically require a budget that a Michael Bay production normally blows, and that's just not possible here. Therefore, the world always becomes unbelievable as soon as something is moving. When the wonderfully made skyscrapers in the background collapse, they suddenly start to look ridiculous, and the fights with the vines also turn out rather absurd. Nevertheless, "Restart the Earth" still has a certain kind of flair that even those shortcomings cannot quite ruin. But what about the story? 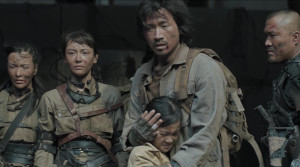 Because of deforestation the world is in danger of degenerating into a desert, which is why humans want to stimulate plant growth. Of course, this leads to a disaster. In a post-apocalyptic world, a father just tries to somehow protect his daughter, and then he suddenly becomes the one who has to save the entire world. This means that, apart from the interesting initial premise, you only get clichés here. The first half of the movie is very atmospheric and has some gripping scenes. Unfortunately, the soldiers then start to sacrifice themselves one after the other for either the mission or the little girl. This happens so frequently that you get the impression the flick tries to set a new record for the highest number of heroic sacrifices. Some of them don't even make any sense at all. For example, characters don't simply throw a hand grenade at the plant monster, instead they wait to detonate it until they have been grabbed by it. In addition, women don't seem to be allowed to sacrifice themselves. That's not what I would call equality... 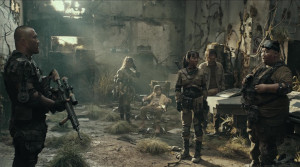 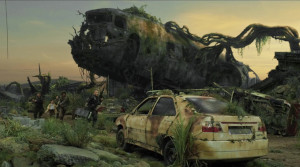 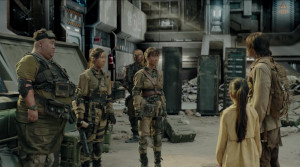 Then, there is of course the finale that is a big problem. Not only does it make no sense who ends up sacrificing themselves, there is also quite some pathos when the nations of this world actually want to give up, but then it only takes a few sentences by the story's hero to persuade the military leaders to make a final attempt of pushing forward. In addition, there are a lot of tears, which leave you cold, though, because the characters are not fleshed out enough for you to really care about them. Towards the end, "Restart the Earth" also tries too much to be an epic action movie. The bottom line is that this flick can definitely be recommended to sci-fi fans, as the atmosphere of the post-apocalyptic world was captured quite nicely, but in other respects, you sadly only get the kind of light entertainment you would expect.