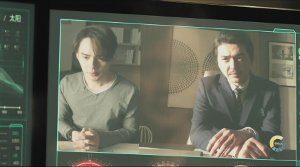 Story: Sun Yang (Zhang Jue) is a freelance astronomer who noticed the flickering of a star. After that, the star suddenly disappeared. Now, he notices the sun doing the same thing. During an interview with Wang Yun (Wang Dahong), who is head of the solar company Helios, Sun gets the opportunity to ask a question and shares his findings. However, Wang claims the hobby astronomer simply must have gotten his calculations wrong. Thanks to Wang Yun, the entire country's energy production is based on clean solar energy. Therefore, it is all the more disastrous when Wang tells the astronomer after the interview that he is actually right. Wang gives him an address, which he is supposed to go to if he wants to survive. Shortly afterwards, the sun starts to flicker visibly and the celestial body disappears. Sun goes to his neighbor Chen Mu (Zhang Yue) to watch the spectacle from her place. People start panicking and Chen offers him a car if in return he drives her to her parents. Sun agrees and the address that Wang gave him turns out to be the Helios boss' home. There, the technology giant has already come to terms with the fact that his empire has crumbled and that people have to live without energy, provided that there even is a chance of survival. Wang tells the hobby astronomer to drive to "District 4" as he would have the best chances of survival there. But is it even possible to survive without the sun? 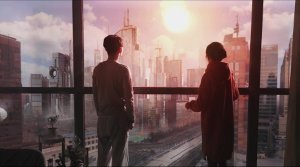 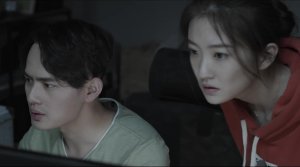 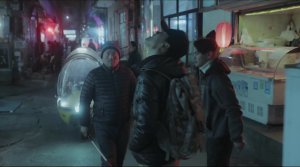 Review: "Last Sunrise" is one of those movies that I have been waiting for since the big success of Frant Gwo's "The Wandering Earth". China's huge interest in science-fiction is no surprise considering the countries ginormous technological change, and this time we get a movie which is not a Hollywood style action-flick, but rather a story which works on a more subtle level. There's social criticism as well as philosophical questions woven into the plot. But most of all, the movie is about the fight for survival in a world which is about to end. As cruel as this world may seem, you cannot help but marvel at the magical starlit nightsky. Oftentimes, the world portrayed here exudes a romantic calmness, which is also embodied by the two main characters. They depend on each other to survive. Because the movie's focus lies on its characters, we actually care deeply about their fate. 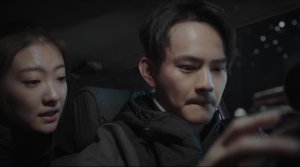 Zhang Jue plays the logical astronomer masterfully. You don't get to see a "hero" like him in those kinds of movies that often. He is always thinking rationally - except for further into the storyline when he already established close ties with his companion - and therefore, he also doesn't stop the car when people on the street desperately wave at him for help. His argumentation makes sense, so you can't consider him a bad person. At worst, you can call him egoistic. However, everybody else around him is egoistic as well. But most of all, people are devious, which is why Sun has an almost pathological distrustful personality. He has never liked people and therefore always stayed alone. Why should he change now? Especially since his rational thinking can ensure his and his companion's survival? As a counterweight he has Chen Mu at his side, who seems a little bit naïve, but in moments of complete desperation she musters up incredible strength and stubbornness. 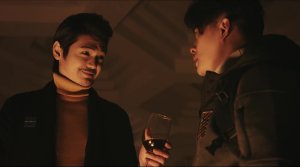 It is especially praiseworthy that the relationship between the two wasn't trivialized by turning it into a cheap romance. The two of them simply know what they've got in one another and they balance each other's extremes out. Sometimes, you get the impression that Sun would have a better chance of survival without Chen, but that would also mean he'd probably lose his last shred of humanity as well. After the catastrophe, the two are searching for a safe haven and the movie turns into a little road movie. But this seems natural as the budget for the sci-fi movie is rather small with 250,000 dollars. However, the movie never really looks like a low budget movie, which is director Ren Wen's biggest achievement here. The cinematography is outstanding, this does not only include the starlit nightsky but also some smaller moments, for instance, we get to see how ice forms on a windshield or an aquarium. At the beginning, we also get some nice CGI effects, which actually really make us believe that we are in a not-too-far future. 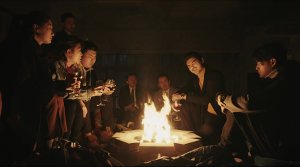 Of course, the budget also limits the director in some respects. For instance, the rest of China looks pretty much like the current China. But that's no problem at all, as those scenes in which you might notice this can be counted on the fingers of one hand. The protagonists are mostly driving on country roads or interact in a coal power station etc. Nevertheless, you cannot deny the fact that the movie has a certain indie vibe to it, especially because of a few very long shots without any cuts. But "Last Sunrise" easily surpasses movies like that and impresses with its images as well as interesting techniques, like for instance a flashback during which we get to see the room in the present, whereas we hear the voices from the past in the background. As mentioned before, there are also some nice dialogues, which include some subtle social criticism. The rich fly into outer space with rockets to secure their survival, Sun grieves about his KI ILSA, who woke him up every morning and talked to him, and society is completely helpless without technology. 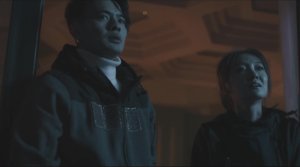 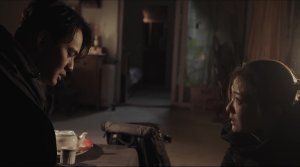 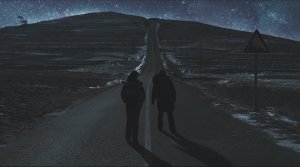 The way the filmmakers explain the sun's disappearance is also done quite elegantly. The explanation should change people's entire lives, but at the moment, they couldn't care less about it. But there are also some points of criticisms. For one, there is the finale in the coal power station, which feels a little bit forced as it serves the only purpose of getting some action into the movie. In addition, there are also some logical errors as, for instance, Sun seems to be able to outrun his pursuers even though he is injured. Moreover, it is almost ridiculous how helpless Sun is in a physical fight. In the end, though, "Last Sunrise" manages to captivate us with its interesting premise and two characters who during an apocalypse get closer on a human level. The movie demonstrates its biggest strength through its emotional accessability. Of course, as expected, we get an open end, which represents a nice mixture of desperation and hope. Actually, the entire movie in general depicts the hopeful notion of life always finding a way. Even if the sun will never rise again.