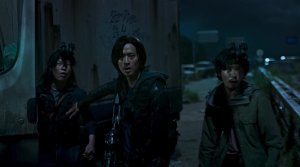 Story: Captain Han Jeong-seok (Gang Dong-won) manages to get his sister, her husband Cheol-min (Kim Do-yoon) and their son on one of the last ships allowed to leave South Korea after a virus broke out there that turns people into zombies. However, there is an infected person on the ship who then infects both Jeong-Seok's sister and her son. Now, four years have passed and Jeong-seok and his brother-in-law live in Hong Kong. They have not yet found any meaning in life and have little hope of getting a permanent residence permit. Then, a gangster boss offers them to go back to South Korea in order to procure a specific truck for him. This truck was already on its way to Incheon harbor, but something seems to have gone wrong. The truck contains 20 million dollars, of which Jeong-seok, Cheol-min and two other poeple will receive half if they manage to get the truck back. The four finally make their way to Incheon and actually find the truck there. However, they are attacked not only by zombies, but also by some survivors. Jeong-seok gets separated from his brother-in-law and only survives thanks to the two girls Joon-i (Lee Re) and Yoo-jin (Lee Ye-won). They take him to their mother Min-jeong (Lee Jung-hyun), who Jeong-seok immediately recognizes as the woman who he left behind with her daughter when he fled Korea four years ago... 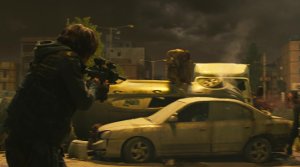 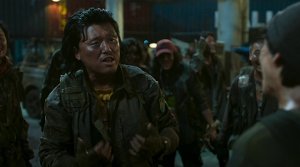 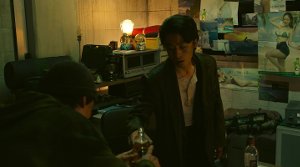 Review: Contrary to what most critics said about "Train to Busan", I personally thought the predecessor to "Peninsula" was an absolutely decent and entertaining zombie thriller, but not one that deserved all the hype. Watching closely, even the movie's supposed strength, its characters, actually turned out just slightly better than mediocre. It is true, however, that the characters were the story's focus and made the movie stand out from the numerous action flicks with zombies. This is absolutely not the case with "Peninsula". Of course, everything is bigger and more spectacular here and in addition, there is also more action. But this pushes the characters even more into the background. This time, we don't even get some indirect social criticism, even though that is director Yeon Sang-ho's actual strength. Therefore, this zombie flick is just a mainstream movie which uses a lot of genre clichés. 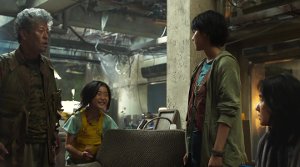 During the introduction, we get to see a talk show (?) which reports on the events that have happened during the last four years. Unfortunately, this does not seem authentic and you get the impression that the disaster which destroyed South Korea is something that you don't have to show that much interest in. Despite the extremely short incubation period, which admittedly makes it easier to contain the disease, the fact that there have not been any outbreaks anywhere else in the world is strange. Moreover, North Korea or any other country has had no interest in "cleansing" the country via military force in order to channel the resources or the money wasting away over there back into the global financial market? Instead, gangsters take up that job? None of this is really believable, but you are willing to accept all of this, because, after all, it is all about a virus that turns its victims into zombies. And of course, with the year 2020, director Yeon has chosen an excellent year for this story. 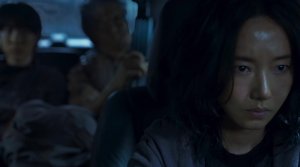 Despite limited release in cinemas, "Peninsula" is likely to be commercially successful in the long run, as the numbers already show. This is only understandable, because after the success of the first installment, business has basically drummed up itself. But there's a lot that went wrong in the movie. We have the protagonist, played by Gang Dong-won ("Illang - The Wolf Brigade"), whose conscience pricks him because he lost his sister and nephew to the virus and he left behind one of the survivors, portrayed by Lee Jung-hyun ("The Battleship Island"). This struggle with his inner demons should have been the movie's focus, but in the end, the characters and their motives remain far too flat. The two hard-nosed children bring a certain level of coolness to the movie, but that's it. The bad guys are just crazy or even completely insane. 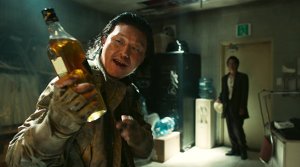 It's also quite irritating that "Peninsula" looks like a mixture of "World War Z" and "Mad Max". The finale with its long chase scene through a post-apocalyptic city reminds us of the latter, and the camp of Unit 631 and the gladiatorial games are reminiscent of the original movie series, or more specifically "Thunderdome". The movie also loses a lot of points for originality as it simply uses any form of zombie scenery or variation of zombie storylines which we have already seen a thousand times before. One of the biggest strengths of the first part was its focus on the train as a confined space with no way out. Now, everything is just bigger and that source of excitement has been discarded. However, during a few moments it shortly reappears, for example when the four arrive in Incheon. Everything is gloomy and quiet, the lighting looks like something from another world, and when the first zombies appear in the dark - initially only stacked behind a thick glass wall - the feeling of a dark threat arises. 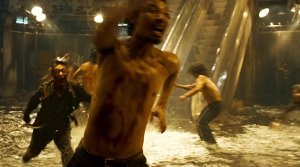 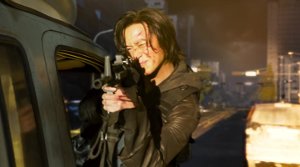 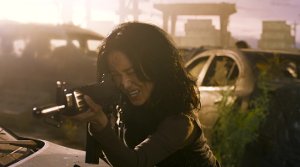 There are some images that turned out pretty nice. Especially the way the director uses flare guns in the dark to bring an eerie light to a dead city. Even though, you might see now and then that some of the backgrounds were created on the computer, it fits the movie because it creates a surreal atmosphere of this city full of the undead. The finale with its car chase scene through the city seems quite interesting for the same reasons. Unfortunately, it becomes clear that a lot of things are only CGI when we see numerous car crashes. In addition to the flat characters and the weak script, the forced drama towards the end turns out to be pretty unconvincing as well. It should be clear that you can and may use time lapses as well as slow or fast motion in the medium of movie, but the way the director compresses time in "Peninsula" is just unintentionally funny. So, what is left when the credits roll? The certainty of having seen some beautiful images of an entertaining action flick, which could, however, also have come from Hollywood and which misses that special something of its predecessor. In this respect, the movie is definitely a disappointment.