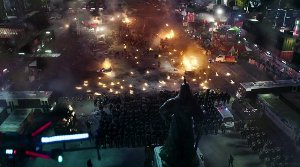 Story: It's the year 2029. China, Japan, USA and Russia have grown to become even more potent military powers. If they don't want to be crushed between those powers North and South Korea don't see any other chance, but to declare reunification. However, there is strong resistance among the people against this decision. A terrorist organization with the name "Sect" comes to life which wreaks havoc within the country in order to avert reunification. The group is so strong and acts with such violence that South Korea is forced to establish a special operation unit - the "Illang". On the so-called Bloody Friday the unit gets some false intel and thus shoots a group of innocent schoolgirls. People are upset and since that day Im Joong-kyeong (Gang Dong-won) carries a heavy burden of guilt with him. One year later, a schoolgirl detonates a bomb right in front of him when the Sect is supposed to be eradicated once and for all. Now, the media is looking for a scapegoat. Han Sang-woo (Kim Moo-yeol) is leading an investigation for the Public Security. Before he worked there he has been a member of the Illang himself. It's obvious that Im's head has to roll for the incident, but Im's superior, Jang Jin-tae (Jung Woo-sung), tries to protect him. Meanwhile, Im is visiting the sister of the dead schoolgirl since he wants to give her the girl's diary. The sister, Lee Yoon-hee (Han Hyo-joo), doesn't blame Im for what has happened, but she also doesn't seem to be the person she pretends to be... 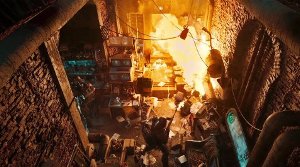 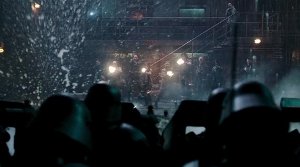 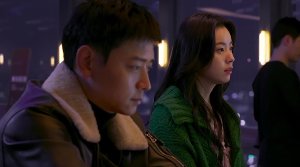 Review: "Illang" is a visually stunning science fiction movie based on the manga by Mamoru Oshii resp. the anime movie "Jin-roh". Director Kim Jee-woon ("The Age of Shadows") has put a lot of effort into fleshing out the world and this leads to "Illang" being the best sci-fi movie coming out of Korea to date. Next to impressive camera work and well done sets the movie also attempts to work on a political level. Deserving some praise in this regard is that the director approaches the subject with a surprising amount of emotional distance. Meaning, that there is no good or bad side to be made out. Instead, every side has its own motives. Of course, this isn't entirely true. There are in fact a few villains within the story. How else could Kim integrate his well captured action sequences? Sadly, the movie is also a bit overambitious and especially disappoints when it comes to character elaboration. 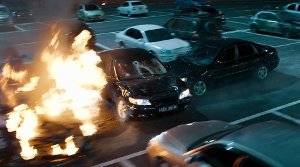 The aforementioned emotional distance to the events on screen - is the "sect" really just a terrorist organisation or why is the Illang special unit, considering their radical approach, supposed to be better than them? - lead to us feeling detached from the protagonists. Particularly with Joong-kyeong, played by Gang Dong-won ("Master"), this proves to be a big problem. He oftentimes seems like a robot, if it weren't for Gang making use of his puppy-eyes every now and then. This means that the love story is at best merely shimmering through the surface. Han Hyo-joo ("The Beauty Inside") may be able to bring some more human emotions to the screen, but this is relativised by the fact that we never know what Yoon-hee's real agenda is. Who is the wolf in man's clothing after all? A motive that Kim Jee-won picks up very explicitly and Yoon-hee even gets a red coat that is supposed to make the metaphor of her being Little Red Riding Hood even more obvious. The links to that fairy tale are oftentimes a bit too prominent. 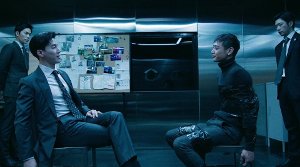 Metaphors only work if they aren't outright hammered into your head. Maybe you might still call them metaphors in that case, but they also feature great parts of self-importance. After all, "Illang" isn't nearly as smart as the director wants us to believe. This could have been different, if the plot had dealt more with Joong-kyeong's inner struggle. This struggly may always be felt in some way, or at least an experienced viewer expects something like this to linger in the air, but is only tackled towards the end. But then, the whole thing seems more like an epilogue and isn't convincing. The individuals should have turned out a lot more original and deserved different facets. That this isn't the case needs to be harshly criticized since the movie has turned out rather long with its running time of nearly 140 minutes. Moreover, the picture takes some liberties and a different path than the anime, which would have been in strong need of more character elaboration as well. 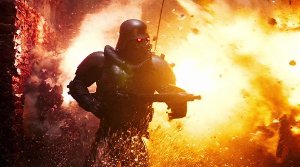 Naturally, it's eye-catching that the story has been shifted from an alternative Japan after World War II to a Korea in the future. The plot works out pretty well within this framework, but from a certain point onward everything just heads into the direction of a typical thriller which features one twist after another. Those twists aren't really smart, though, since they only boil down to one team being one more step ahead of the other team than we thought. At least, there are a few nice action scenes, whereas the one in the Namsan Tower and the demolition of several cars right after that is the most memorable. The shootouts in the canalisation are nice to look at, too, since this is where the film's visual strength shines through the best. With its palette of brown colors and the terrifying armor of the Illang as well as the demonstrations on the street and a society at the edge of war the movie also stands as a pretty dark sci-fi-flick. 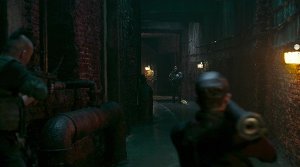 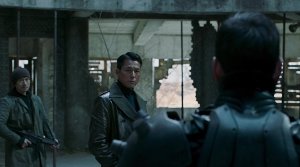 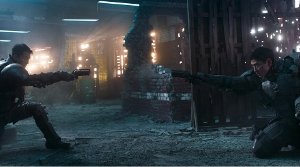 However, it's debatable whether the armor with its gas mask and the red glowing eyes really fits into the future or not. In regard to the visuals it rather seems as if it would have fit better into a setting shortly after World War II. Yet, it is without the shadow of a doubt that the costumes are one of the movie's greatest achievements. Next to that, the soundtrack is also well done and Kim Jee-won includes some innovative camera work, which makes the movie - despite not having that big of a budget at hand and the fact that fashion and cars don't seem to change that much within the next ten years - depict one of the most impressive dystopian worlds in Asian cinema. In the end, "Illang" also struggles with some lengths, though, and characters which would have deserved more depth. The way it is you might be able to guess what direction the director wanted to head into with his cinematic vision, but he didn't succeed in fully bringing it to the big screen.