Story: Jong-woo (Shin Ha-kyun) is a former criminal, who is a master in escaping the police. Nowadays he is leading an honest life, though, taking care of his 18-year old son Gi-hyeok (Lee Min-ho). At night he works as a cab driver and one day he has an unusual customer, who promises him a lot of money for driving him. However, the customer suddenly is dead and Jong-woo flees in panic. The next day he wants to turn himself in at the police station since he hasn't done anything wrong. He even knows Lieutenant Sang-gi (Kim Sang-ho) personally, but the police has just analyzed a CCTV recording which shows Jong-woo and now they believe that he is the killer. The former criminal flees but not just from the police as it turns out. There is also the secret service and a killer hot on his trail. It seems that a picture Jung-woo has been sent by his customer before he died includes secret government information. At the same time Sang-gi and the female reporter Seon-yeong (Jo Eun-ji) also start to believe in a conspiracy and with the help of Jong-woo's son they now search for evidence.

Review: Expectations for "Running Man" could have been quite high, but the flood of mediocre action movies that remind us of Hollywood flicks in their predictability and cheap showmanship has actually tuned down enthusiasm these days. And that's a good thing because without any expectations you can get quite entertained by this action comedy. The unpolished flair of this film is the root of some flaws, furthermore there is far less action to be seen than you would assume, but despite all the legitimate criticism it also remains a given fact that you will be entertained quite well here. Supposed that you are willing to check your brain at the door and let yourself get taken on a nice roller coaster ride by a great Shin Ha-kyun in the lead. 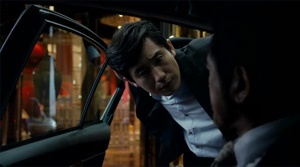 It doesn't really take long for the first chasing scene to hit the screen. Concerning the action scenes it needs to be pointed out that they are actually used more sparcely than you would expect. This makes the movie less over-the-top and ridiculous than let's say ("Quick"), a movie which certainly comes to mind because of some parallels, but it also leads to the pacing dragging one time too many. Yet, when the action kicks in it is pretty inventive, which is something the director deserves credit for. For more than a dozen times Jung-woo survives simply because he is one hell of a lucky devil, and actually he should have broken every bone in his body at the end of the movie, but the camera work, the soundtrack and the choreography of the action scenes is just about right. Only the finale is a bit disappointing as there certainly would have been potential for more. 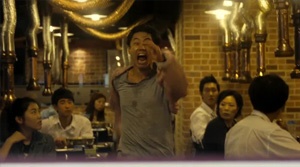 Another positive thing to note is the humor. Sometimes it doesn't fully hit the mark, but often enough it hits you with unexpected details that aren't sold as big gags and thus can make you laugh all the more successfully. A little example: A policeman is frantically shouting in his radio, but out of habit holds it against his ear like a mobile phone until he realizes that this can't work at all. It's surprising how good the humor is at times and this even though there are a few clichés like the incompetent policeman the protagonist knows, played by Kim Sang-ho ("Moby Dick"), or the wired reporter, embodied by Jo Eun-ji ("Driving with my Wife's Lover"). Director Jo Dong-oh ("The Restless") has also written the screenplay and there are especially some cut-backs when it comes to the characters.

At least most characters are somewhat charismatic, but heart and soul of the movie is without the shadow of a doubt Shin Ha-kyun ("The Front Line", ("Murder, Take One"). When "Running Man" loses its focus, and sadly this happens very frequently, he is the one who somehow keeps things together. So let's continue looking at the screenplay. Behind the action an unspectacular conspiracy waits for us to be uncovered. You have seen all of this countless times before and there isn't even a serious attempt to shape the story in a more interesting way. It's even irritating when the son links certain facts which the viewer did already half an hour before and yet everyone is truely impressed by his power of deduction. Seeing that it begs the question if maybe it wouldn't even have been better to completely do without a story and instead deliver more action. 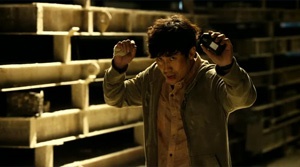 With its 127 minutes running time this action film is too long. This is also incomprehensible since there are countless possibilities, particularly in the middle of the movie, to cut it short. The small drama of Jung-woo's wife is rather out of place and distracts from the actual plot. In short things get out of hand for the director and so "Running Man" at times seems longer than necessary. Moreover, it would have been nice to see Jung-woo do some more running, because his dogged way of running for his life has something refreshing, energetic and funny about it. Considering the movie's title it also would have been something to expect. Despite all that the film isn't as bad as some may describe it to be. This is mainly the effort of the fantastically dynamic and chaotic action scenes. Unfortunately, "Running Man" occasionally runs out of breath, yet it actually is just the right choice for an entertaining evening.