Story: A nuclear weapon of a new type, called DC8 and developed in South Korea, which even fits into a small bag, has been stolen by the weapons dealer and terrorist "Helios" (Chang Chen) and his right hand (Janice Man). Helios wants to sell the weapon in Hong Kong, which leads to a special task force being set up. The team consists of a Hong Kong anti-terror unit spearheaded by Eric Lee (Nick Cheung) and supported by Fan (Shawn Yue), while Colonel Choi Min-ho (Ji Jin-hee), who is a specialist when it comes to the DC8 and is protected by agent Park Woo-cheol (Choi Siwon), joins the team from South Korea. Moreover, professor Siu Chi-yan (Jackie Cheung) supports the team with important advice while constantly bumping heads with Song An (Wang Xueqi), a high-ranking official from mainland China, since they differ about how to deal with the DC8. After the task force has acquired information about the location of the upcoming weapon deal an operation is launched during which a lot goes wrong. Yet, the special task force actually succeeds in acquiring the DC8. However, that's just when problems really start to arise, especially since Helios wants to get the weapon back, no matter the cost...

Review: At first glance "Helios" seems to be an action thriller that wants to follow in the footsteps of Hollywood blockbusters. An international crisis, weapon dealers, special agents and an adrenaline-loaden chase. It's just unfortunate that the action looks quite generic and that the several individuals can't manage for the at times interspersed dramatic moments not to look heavy-handed. But apart from the seemingly arbitrary shifts from one location to the next another layer of the movie is eventually revealed which seems more political in nature. But that's where "Helios" manages to convince even less since on the one hand it doesn't work on this level all throughout and on the other hand its framework is too weak for the evens unfolding to be thought-provoking. Consequently, the biggest problem of this flick is that it wants to be a little bit of everything and thus turns out to do nothing right. 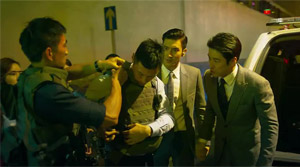 Longman Leung and Sunny Luk have learnt, after their movie "Cold War", a mediocre thriller with lots of dialogues, which nonetheless was a big box-office success, that a good thriller may also feature a bit of action. Yet, you soon get the impression that the two directors simply wanted to particularly please a big international audience. The action may be well-edited, but most of the time the shoot-outs are hardly original and it is quite alienating that even during the more slow-paced scenes a score pulsates through the speakers which wants to create suspense. But this makes you realize even the more clearly that nothing really extraordinary is happening on screen. Furthermore, the score is also awfully uninspired and this even though it is composed by Peter Kam ("Isabella"). 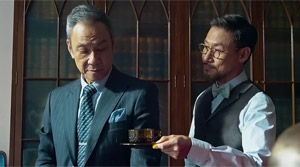 At least, there is quite an interesting fight between Nick Cheung and Janice Man. Even though the rest of the action scenes turn out to be rather genre-typical they are evenly spread throughout the film. It's irritating though that the locations aren't truely memorable and this although a giant budget of over 20 million dollar was at the directors' disposal and the action is being shifted to South Korea and Macao every now and then. By the way, there is only little bad English spoken in the movie. Most of the time an earpiece and a translation software allows the different nationalities to communnicate with each other. And that's necessary, since - as was already the case in "Cold War" - there are often very long scenes during which the protagonists sit around and discuss things - while the discussion also gets quite heated occasionally.

But the dialogues are a big problem. Actually, they aren't that bad, but they seem a bit inauthentic in parts and moreover once again prove that the movie doesn't really know what its message is supposed to be, especially since it often goes down the easy road and renders certain hard decisions that were just made obsolete by the next arbitrary twist. Acting-wise at least Nick Cheung ("Unbeatable") and Jacky Cheung ("Perhaps Love") stand out, while Janice Man ("The Midnight After") has a strong on-screen presence and Ji Jin-hee ("Parallel Life") brings a more human aspect into the film through his background story. But this makes even the more obvious that the rest of the individuals lack just this kind of character elaboration. Even Chang Chen ("Brotherhood of Blades") needs to fully rely on his on-screen charisma as the villain. 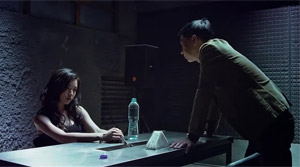 At first, it is annoying that the characters are mainly introduced by making them look full of hot air as they walk around while the action comes across as uninventive. After that it seems as if the spaces between the several story developments are just being left empty, putting simply one scene after the other, without wasting any thought on continuity. Later on, "Helios" proves to have guts as even a protagonist dies eventually, even though he deserves his demise considering his stupidity - after all he puts himself into danger without having any real backup. However, towards the end "Helios" becomes a truely frustrating affair, since the movie is suddenly turning into a prelude to an overall picture that is way bigger than what seems appropriate. The open ending and the fact that the movie collapses under its own giant ambitions is the main reason - next to a few moments that come along with too much pathos/drama and an emotional detachment of the events unfolding - why this big budget action-thriller can't deliver.