Story: Suet (Lam Suet) fills in for a colleague and takes over his bus route from Mongkok to Tai Po. However, after the bus has passed the Lion Rock Tunnel the streets are suddenly completely void. Some students get off the bus and one of them looks extremely pale. Arriving in Tai Po the passengers realize that something isn't right. There isn't a single soul to be seen anywhere. Before every passenger heads home phone numbers are exchanged in case Hong Kong is still a ghost town the next morning. On his way home Yau (Wong You-nam) sees a man with a gas mask and he also has a strange vision of Yuki (Janice Man), who is one of the passengers from the bus. When the streets are still empty the next morning and every passenger gets a call with odd noises, everyone gathers at a restaurant and discusses what to do next. Computer specialist Shun (Chui Tien-you) finds out that the noises from the phone call represent a morse code encoding the song "Space Oddity" by David Bowie...

Review: "The Midnight After" is an unusual and courageous movie. One that doesn't care about genre conventions, but one that can be inconsistent, alienating and frustrating, too. Especially Western audiences will find the negative aspects interfering. Because this post-apocalyptic flick in fact stands as a metaphor for modern Hong Kong and its citizens, who politically and socially don't know where they belong to. Those who don't understand the film as this kind of metaphor will not only find fault with the countless unexplained events, but most likely will also get worked up about the black humor and the fact that the movie more and more slips into strangeness towards the end. It's movies like this that make it hard to give them a rating. 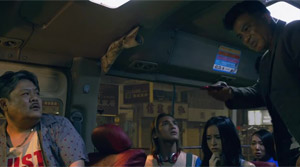 With his newest work director Fruit Chan shows that he can skillfully combine his independent filmmaking roots with visually impressive pictures and at the same time he knows how to get the maximum out of his budget. Moreover, he also displays the sort of courage dealing with unconventional and provocative themes that was already apparent in his "Dumplings". However, at first things start off in an extremely mysterious manner. At a moment's notice Hong Kong is completely void of any life. The pictures of the empty streets of a normally unusually lively Hong Kong, particularly at night, are impressive and are the cause of a nightmarish mood. The lighting is fantastic, too. This setting, which reminds you of a zombie apocalypse, creates the framework for some odd mysteries that gradually unfold. At the same time the film gets more and more entangled in its own puzzles which we are dying to get some answers for until at some point it becomes merely frustrating. 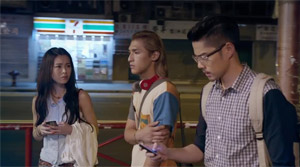 This is what will inevitably remind you of the tv show "Lost". The same kind of self-adulation through new revelations that actually aren't ones and eventually beg for more answers can be found here as well. What's the deal with the mask-wearing man? How exactly does he fit into Yau's past, what kind of secret does Yuki hide and why does Yau often see her as some sort of demon? And what about Major Tom? Yes, the song by David Bowie doesn't play a minor role in the movie and once again underlines the metaphor of being lost. And the moment the song is introduced to us in a deliberately badly shot music clip also stands as the narrative cut when the odd humor takes the upper hand. Basically, it's not that hard to cotton up to the black humor which oftentimes slips into the absurd, it's just the tonal shift, which particularly towards the end steers into the realm of wacky chaos, that is annoying.

This chaos once more brings us to the questions the movie leaves us with. Even at the beginning we are worried whether the film will go completely astray or not, since it seems impossible to give a satisfactory explanation for all the events. From the second half onward we realize that almost all of our questions will remain unanswered. On the one hand this may be because the film is based on an unfinished web novel by "Mr. Pizza", which Fruit Chan doesn't stick close to anyway, and on the other hand this may be because the director apparently isn't interested in delivering any answers after all. Normally, this would turn out to be a very risky decision with little prospect of success, but since Fruit Chan arranged his film as a socio-satirical metaphor you may be inclined to forgive him for this. 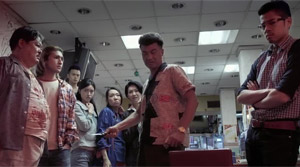 The characters in the film depict different archetypes of varying social backgrounds and Simon Yam ("Exiled", "The Thieves") as well as Lam Suet ("PTU") manage to be the most convincing individuals. The unusually three-dimensional nature of the personalities, despite the abundance of characters, also becomes apparent in the mysterious girl Yuki, embodied by Janice Man ("Nightfall"). The dialogues never get boring, the pacing is very good, but there are some oddly unpleasant scenes, including necrophilism, which then again should be something we are used to see from Fruit Chan. The open ending is very confusing and you could even expect to see a sequel in the future, but that's also where the special nature of the film becomes apparent. Only little makes sense in this horror comedy. However, as soon as you transfer the individual elements to modern Hong Kong and the problems citizens there have to face, a completely new, extremely complex film starts to emerge from beneath the surface of "The Midnight After".