Story: Ching Fai (Nick Cheung) was a boxer back in his days, but he has messed around with the wrong people. Accordingly, his career has been in ruins for ten decades now and in order to escape the loan sharks he flees to Macau. There his friend Tai-Sui (Philip Keung) hooks him up with a job in the training centre he works at. He finds a place to live at the home of mentally unstable Gwen (Ting Mei) and her little daughter Pui-Dan (Crystal Lee). He soon finds out more about Gwen and the death of her son and also becomes friends with the little daughter.
At the same time Lin Si-Qi (Eddie Peng) ends up in Macau, too, as his father is looking for comfort in alcohol there after he lost all of his fortune. Lin hasn't achieved anything in life yet and now wants to prove his father his worth. Thus, he wants to participate in a MMA contest. He finds out that Ching was once a boxing champion and wants the get trained by him. At first Ching is reluctant but he lets himself get talked into it. The responsibility the former thug has for more than just one individual all of a sudden makes him get aware that he has finally reached the level of maturity that allows him to manage his own life.

Review: Why does it only seem to be possible to get either good action or a character-exploring drama? Shouldn't it be possible to deliver a profound action film?! "Unbeatable" apparently wanted to achieve exactly that. Therefore, expectations were quite high. But "Unbeatable" doesn't just come up to expectations, but even exceeds them by a bit! At first glance this drama might revolve around your typical themes of a sports movie or particularly of certain boxing movies, but in the end "Unbeatable" digs a lot deeper, thanks to a fantastically written story which puts the individuals into the foreground, a surprisingly well implemented humor and a main lead that delivers the crowning achievement of his career. It isn't exaggerated to say that this MMA drama manages to captivate and enthrall all the way from the beginning to the end. 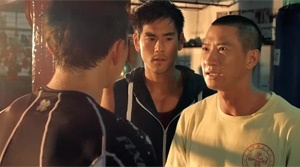 MMA (Mixed Martial Arts) is still a very young sport in Europe and even though the risk of injury isn't any higher than that of boxing I personally find it as little aesthetically appealing as... well, boxing. Therefore, I somewhat was sceptical if this sport might not actually turn out to be a interfering element in the movie. It turns out the contrary is the case. Maybe also thanks to our knowledge that no one really wanted to hurt others and this in fact is just a movie the fights are a whole lot of fun since they are hard, brutal, realistic and filled with a 100 percent of adrenaline. The several fights are spread throughout the movie in a perfectly balanced manner and thus we get to see a mix of action and drama in a way you seldomly have seen executed that well. MMA fans as well as martial arts fans or simply action enthusiasts will absolutely get their money's worth. 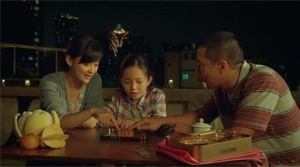 But, and this needs to be stressed once more, "Unbeatable" first and foremost is a drama that uses the sport as a metaphor for the harshness of life and the will to get up again despite many setbacks. Putting its focus there the action drama shows its strengths in a complex story web that mainly centers around an aged MMA champion who learns through his new student and a family, which he slowly starts to become a part of, to take on responsibility for others and also find fulfillment in this. Nick Cheung ("Nightfall", "On the Edge") simply delivers a great performance. His character is strong and vulnerable at the same time and can give an impression of his background without the script needing to write it out in full. Considering his 46 years he is also ridiculously fit, even though especially at the beginning it is toyed with the fact that he simply can't keep up with the young ones anymore.

Ching shares a special chemistry with his student Lin, played by Eddie Peng ("Tai Chi 0"). In the action scenes Peng really gave it his all, but acting-wise he is constantly outshined by Cheung. However, that's alright since he might have an important side story, but isn't supposed to be in the center after all. Yet, it's particularly the scenes between Cheung and Peng which are at times extremely lighthearted and on several occasions offer genuinely funny moments. Cheung and Peng make for a great buddy duo on screen. Moreover, the story is woven around a mentally unstable mother and her little daughter (fantastically played by Crystal Lee). Here we also get to know a lot about the background, and the relationship that connects Ching to the family is unusual as there isn't any typical love story going on! "Unbeatable" doesn't choose the easy road and that's what makes it a success. 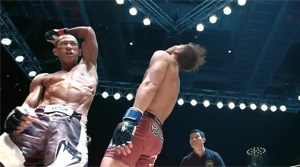 It's astonishing how well director Dante Lam ("The Viral Factor", "Fire of Conscience") is juggling genres and by doing so also strikes home. That's even the more astonishing as we have seen the director almost entirely as someone who brings to screen gritty stories. "Unbeatable" on the other hand is incredibly life-affirming and this in a touching manner you seldomly get to see. Especially since there is no melodrama. Additionally, Macau as the shooting location gives the movie a special flair with all the Portuguese architecture. The pictures are nice to look at and along with the wonderfully told story and a fitting soundtrack (Ania Dabrowska's interpretation of "Sound of Silence" just fits in perfectly) they bestow something profound, almost lyrical on the movie. Dante Lam simply was an overrated director for me up to now, but with "Unbeatable" he delivers a small masterpiece. Granted, in its core the story isn't anything new, but finding its own rhythm and at the same time remaining entertaining and touching throughout is an achievement that is extremely rare to witness.