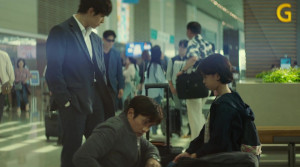 Story: Jae-hyeok (Lee Byung-hun) wants to go to Hawaii with his daughter Soo-min (Kim Bo-min). However, at the airport restroom Soo-min sees a man implanting a small object in his armpit area. When the man, the scientist Jin-seok (Im Si-wan), realizes that somebody saw him, he decides to take the same flight as Jae-hyeok and his daughter. In the meantime, Detective In-ho (Song Kang-ho) follows up on a clue suggesting that the man who recently announced a terrorist attack on a flight on social media supposedly lives in an apartment complex in the city. The detective discovers a body in the apartment and some videos documenting how the scientist Jin-seok made a virus mutate until it led to death in the shortest possible time. The man is put on the wanted list, but the plane to Hawaii already took off. As his wife is also on the flight, In-ho is doing everything in his power to inform the aviation authority of the gravity of the situation. At first, people don't want to believe him how dangerous the situation actually is, but then the flight captain reports that one of the passengers died of a strange disease. Jin-seok managed to release the virus on the plane, despite the fact that Jae-hyeok and his daughter informed the flight crew about the threat that the man poses. Now, the situation is getting worse and worse as the virus is highly contagious... 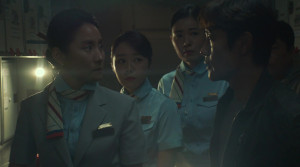 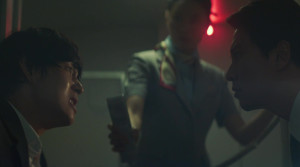 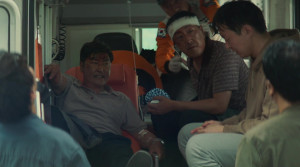 Review: To make things clear right away, as a viewer you can simply put "Emergency Declaration" in the category: stupid, but extremely effective blockbuster entertainment. As a film critic, though, you'll notice numerous problems that make this disaster flick about a virus outbreak rather low-grade. On the one hand, there is the fact that the movie is much too long and tries to keep several characters together throughout the events in an implausible manner, while there are too many coincidences, which make the already pretty fabricated story almost ridiculous. On the other hand, the movie is jam-packed and always presents us with a new crisis, which keeps the suspense up. Since the movie does not have a small budget - the popular cast leave no doubt about that -, and the directing job is quite well-done too, it is not that apparent that "Emergency Declaration" could as easily have become a B-movie which actually just manages to entertain because of its involuntary comedy. 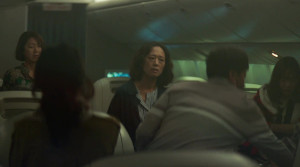 In fact, it already starts with the villain who can't be taken seriously. His behavior is so conspicuous, both at the airport and with Jae-hyeok and his daughter, that it would be impossible for someone like him to actually board a plane. His various warnings and his former employees should at least ensured that the police checked in on him. Of course, this only happens after he already departed. Jae-hyeok's daughter has some eczema which looks exactly like the symptoms of the virus, the pilot and Jae-hyeok have a shared past, and the wife of the police detective, who is investigating the case, is also on the plane. But that's just the tip of the iceberg of coincidences. The virus is also used as a joker because it does not seem to have an exact incubation period, at least not in practice. While one pilot collapses within a very short time, the other one seems to be able to just sit there half-dead for what feels like days. 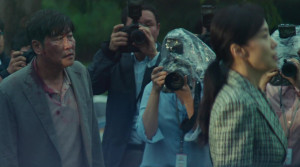 One aspect that makes it hard to overlook the weaknesses in the script is the virus itself. Not one member of the flight crew thinks of organizing something like a quarantine, the passengers have to take that into their own hands. Only a handful of people actually put a piece of cloth over their mouth and nose, other than that, no precautions are being taken, and the ground crew does not give any instructions in this regard either. And we are not dealing with the flu or COVID here, this is a virus that leads to death with a 99 percent chance within only a few hours. A virus like that would actually have a hard time spreading unnoticed or quickly, which is why the drama, that inevitably arises as to whether and where the machine is allowed to land, seems quite questionable. Then there is suddenly an antiviral drug, which might be plausible within the further course of the story, but not the fact that they are able to produce the quantity needed within such a short time. In addition, the body in the psychopath's apartment tests positive - but for what exactly? 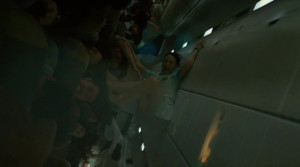 Maybe it's wishful thinking if I assume that the typical moviegoer will have a problem with that too, but after/during the corona pandemic you should know a thing or two about how viruses work on a scientific level and therefore you would realize that the movie presents you with a lot of nonsense. It is also a pity that the panic on board does not really come into effect, even though the stigma of possibly being infected is touched upon, as well as the fact that in the end, each country only thinks of itself and does not want to let the plane land. Sadly, the characters are very flat too, and it's only thanks to the well-known cast that they do not become completely irrelevant. Song Kang-ho ("Parasite") is the involuntarily heroic detective, who is involved in the case and takes the initiative even when the matter has already been taken to higher authorities and is handed over to a specialist, portrayed by Jeon Do-yeon ("Beasts Clawing at Straws"). But those two have the same problem as the main actor Lee Byung-hun ("Ashfall"): Each one of them might as well have been replaced by a lesser known actor, as they are not allowed to show their talents. 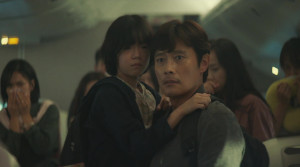 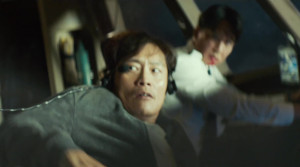 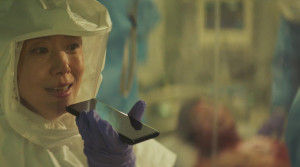 Up to this point, you might think this was a devastating review. However, there are also some positive aspects. Despite the fabricated nature of the story, the flick works pretty well as a disaster movie, and every time the action/suspense is in danger of losing pace, a new problem appears on the horizon. Adding a score, which prophesies disaster in the background in style of Hans Zimmer - sometimes buzzing quietly, at other times booming loudly -, makes you feel like you could cut the tension with a knife even though apparently nothing happens: but that's because the next catastrophe could actually happen at any moment. In terms of entertainment value, "Emergency Declaration" therefore works quite well, and it is exactly that kind of well-produced blockbuster action movie you need after a hard day's work when you don't want to turn on your brain anymore. Unfortunately, this positive impression is eventually damaged by an unnecessarily dramatic finale with a message that simply makes you roll your eyes. Nevertheless, this disaster movie is still nice evening entertainment, as you can't do much wrong with it.