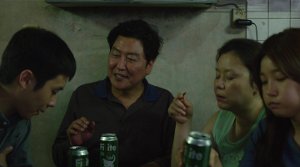 Story: Kim Gi-taek (Song Kang-ho) lives in a rundown semi-basement with his wife Choong-sook (Jang Hye-jin), his son Gi-woo (Choi Woo-shik) and daughter Gi-jeong (Park So-Dam). The family is unemployed at the moment, but one of Gi-woo's friends gets him a job as a tutor for a rich family. Even though Gi-woo himself didn't make it to university yet, he manages to get the job thanks to his friend's recommendation and a certificate that Gi-jeong easily forges thanks to her artistic talents. Mrs. Park (Jo Yeo-jeong) is convinced by the young man, and her daughter Da-hye (Jung Ji-so) is also pleased with the handsome, young man. The little boy Da-song (Jung Hyun-joon) seems to have some extraordinary artistic talent and therefore Gi-woo explains to Mrs. Park that he knows a woman who works as an art tutor, even though she is in great demand at the moment. Gi-woo introduces his sister as Jessica, who studied in America and the girl immediately gets the job. "Jessica" then easily manages to make the family's driver fall into disgrace with the husband (Lee Sun-kyun) and introduces her own father Gi-taek as her family's former driver. Now there is only the mother of Gi-woo's family left to get an employment in the rich family's household. But to get rid of the housekeeper Moon-gwang (Lee Jung-eun) turns out to be especially hard... 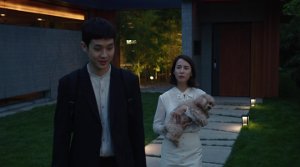 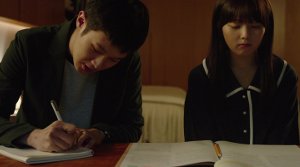 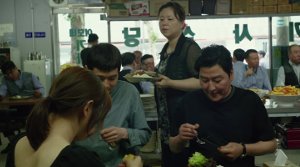 Review: After his excursions into international waters, Bong Joon-ho returns to his home country and composes a movie with "Parasite" that reveals his black humor quite distinctly without adding chaotic color shades like he did in "Okja". This is rather pleasant and makes you recognize the old Bong Joon-ho again. The director didn't lose sight of his true self and his style and that's what makes his newest movie, which won the Palme d'Or at the Cannes Film Festival, into an extremely interesting drama with thriller and comedic elements. As expected, the filmmaker also implemented a good portion of social criticism. And this time, he also approaches his themes a little bit more subtle, even though the criticism about materialism, the servants' situations and the income gap is not that hard to detect and you can tell that the director also wanted to reach a wider audience with his ideas. 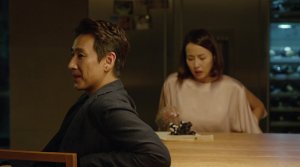 "Parasite" starts out a little bit slow, but the characters immediately manage to draw you into the movie. Each family member has their own unique characteristics and to explore them as we go along makes up for a huge part of the movie's fascination. But soon the pace tightens and the thriller elements come into play. During the second part of the movie there are some twists here and there that rock the boat and give impulses into other directions. At one point, there even is an exciting game of hide-and-seek during which you don't know whether to stay glued to the screen or just smirk. However, these special elements, during which the movie plays with genres and Bong's humor comes to the surface, create the appeal of "Parasite" and carry the director's handwriting. In addition, the twists are well-done and now and then they lead to things escalating more than you would have expected. Nevertheless, the humor is always present and guides us through the movie's social criticism in a pleasing way. 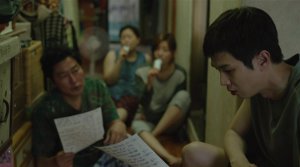 The juxtaposition of two elements, namely rich and poor, gets a special touch in "Parasite" when people are willing to become slaves/servants for money. For the rich family it is a question of social status to have servants. The rich wife, played by Jo Yeo-jung ("The Concubine"), is portrayed a little bit naïve and seems to be some kind of trophy for her husband, who is played by Lee Sun-kyun ("A Special Lady"). At least, that's what you believe at the beginning, as the characters are a little bit more complex than that. Soon, the question arises why exactly the poor family turned out to be so poor. Apparently, the family members each have extraordinary skills: the father is an excellent driver, the mother manages to cook meals she has never heard of before on the spot etc. Maybe the family is simply lazy and just after a quick buck and that's why they only manage to keep afloat with these kinds of con jobs? Are we allowed to feel sorry for them? 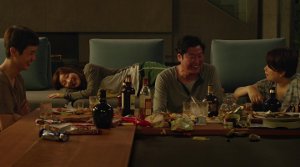 And that's where the father comes into play. Song Kang-ho plays Gi-taek ("A Taxi Driver"), a man who runs away at the slightest hint of a problem and takes the line of least resistance. His wife even makes fun of him by saying he is like a cockroach which disappears quickly as soon as the light gets switched on. With a father like that as a role model, of course, the cards are stacked against the kids. However, you have to ask yourself whether the father became that way after so many of his business ideas failed or whether his mannerisms are in fact the reasons for so many things not working out in his life. You will, however, not get any answers to these and so many other questions in this movie. Nevertheless, there are a lot of things left to explore about the characters, and special praise goes to the director for developing the events with a pleasantly nice pacing after starting out rather slow. Hence, Bong's expertise gets obvious in both the script and the direction this time. 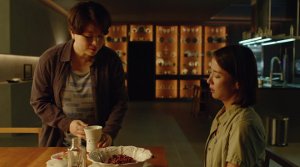 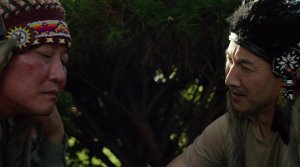 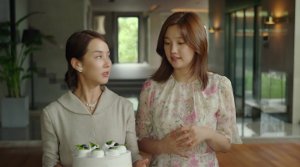 The imagery is also beautiful because the rundown semi-basement creates a brilliant contrast to the former luxury house of an architect. In addition, there are camera shots that give great importance to some scenes and prove that sometimes film festival awards are well-deserved. Of course, there are also some points of criticism. For one, there is the fact that the con family's plans are based on coincidental events that, of course, just happen to play out the way they are supposed to. Moreover, there is a rather unnecessary epilogue, which could have been shorter. Nevertheless, in the end, we get an extraordinary movie, which manages to entertain us with its black humor and steadily rising suspense, but also gives us some material to reflect on. However, you also shouldn't expect something too profound here. "Parasite" simply works as a whole. A movie that shows what this medium is actually meant to do: tell interesting, entertaining and socio-critical stories.