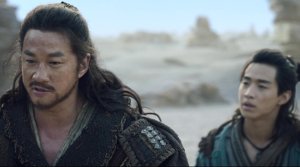 Story: Northern Yan and Southern Zhao are two kingdoms that have been at war with each other for a long time. At the moment, there is a truce, but a spy at Zhao's royal court, Grand Tutor Guan (Hu Ming), who is also the king's direct adviser, has already found a way to bring the country to its knees. After an assassination attempt on the king, Guan suggests to organize a martial arts competition. The winner will be awarded the title of Great Field Marshal and is supposed to strengthen the country's military force again. Therefore, three fighters from all eight clans in the country are supposed to be selected, who then go to Phoenix City and compete against each other. Guan's real plan is for the country's most dangerous warriors to take each other out and prevent them from doing something about the looming revolt by using a loophole in the law. The wanderer Dong Yilong (Henry Lau) from the Qingyuan clan volunteers and after Chu Hun (Peter Ho Yun-tung) hears that Guan is organizing the competition, he also volunteers, because he still has an old score to settle with him. On the way to Phoenix City, however, the two lose their third man, but when they finally arrive at their destination they meet the girl Jinggang (Lin Chenhan), who does not belong to any clan, but wants to come to fame. She becomes the third in the league and soon the three have to compete against the other clans... 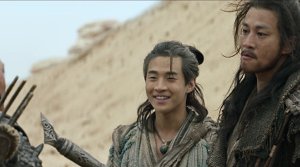 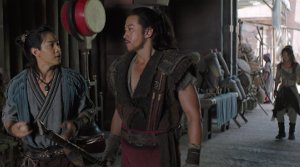 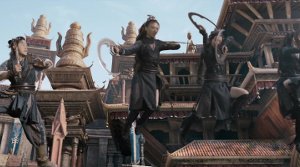 Review: "Double World" is one of those modern fantasy flicks that play around a little too much with computer-generated special effects instead of focusing on what would have made the story and its core into a good movie: its wuxia roots. If you were to create a fantasy flick from Hong Kong like "The Storm Riders" in today's time, a movie like this would be the result. The world is interesting and has a lot of potential, as do the characters, but the movie doesn't tap its full potential. Instead, everything remains pretty flat, because all elements with substance have to take a back seat, while the effects and impressive scenery have priority. But the tragedy is that the scenery doesn't actually look so impressive, it's just a lot of green screen. This fantasy flick in fact works best when the dynamics between the characters come into play. 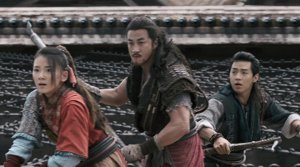 The characters are so colorful - but also quite generic - because the movie is based on the very successful Chinese MMORPG "Zhengtu". This also becomes quite obvious when we look at the other clan groups, such as the three female warriors with their crescent-shaped knives. The world looks colorful and promising, and the task of getting a dragon egg literally begs to be called a "quest". The costumes and sets, unless they were created on the computer, immediately draw you into the world and the weapons are also designed with great attention to detail and match the fighting style of the respective characters. As mentioned before, the protagonists are not exactly exceptional personalities, but with the ever so helpful and somewhat trusting philanthropist Yilong you get to see the kind of hero who actually plays a subordinate role, but always serves as an anchor when somebody from the group acts too selfishly again. 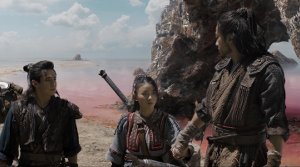 Henry Lau is a singer, dancer and plays various instruments. Because he does not only speak Chinese, but Korean too, he was even a member of the boy band Super Junior M. Obviously, the movie makers wanted to appeal to a more diverse group of fans all over Asia with him in the cast, but thankfully he actually has charisma and fits the role. However, most of the time, he has to make way for the real hero of the story, Chu Hun. His story revolves around revenge, and he has a nice side story with a slave who wants to take revenge on him as well, even though this plot line doesn't perfectly hit the mark on an emotional level. Peter Ho plays the hero, who in fact is not really a hero, and he does a great job at that, especially during the action scenes. Nevertheless, he doesn't manage to measure up to his performance in "Sword Master" (which is, by the way, still the best movie in the Wuxia genre of the last couple of years). 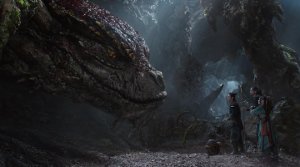 The trio is completed by Lin Chenhan, who plays a lively girl wielding a huge sword. Cloud Strife would be impressed. This brings us to the action, which is amazing. Martial arts fans might expect a little more, but this is a wuxia flick with lots of fantasy elements, so the fights aren't necessarily down-to-earth. This fits the movie's style. Guan's huge lap dog or the dragon, whose egg has to be stolen, on the other hand, constantly attract negative attention. The CGI just doesn't look convincing enough, and because the movie actually cost 43 million dollars to make, it should definitely look more authentic. However, you can at least see that a large, wide and complex world serves as a background here. Why it needed all the mechanical gadgets at court is another question, though. Even if it might be part of the world, it does not look believable. Strangely enough, the filmmakers seem to have put a lot of time and effort into the fire effects, and it pays off because they are among the best effects you can generate on a computer. 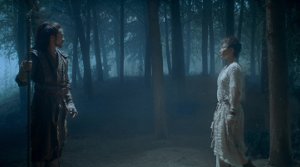 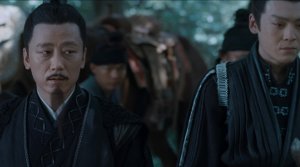 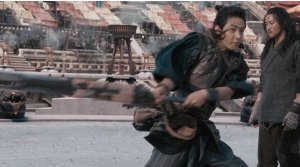 The movie constantly reminds you of flicks like "Legend of the Ancient Sword". Somehow you want to like the movie, but there's too much that's unpolished and chaotic, although you have to admit that "Double World" is a lot better than other movies of the genre because it clearly respects its wuxia roots and the emotional moments aren't quite as shallow. In fact, the movie can even be incredibly grim and bleak when it comes to the death of some characters. This can be quite pleasing and gives the genre some kind of fresh air, as you could as easily have gotten a candy-colored popcorn movie here. However, the story is too flat and there are also a few moments when nothing really happens. Somehow, you can't help but recommend the movie to wuxia fans, though. There are simply too many moments and elements that remind you of that genre and put a smile on your face. Nevertheless, the director could have done so much more with it...