Legend of the Ancient Sword 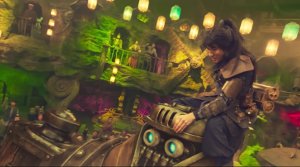 Story: Yue Wuyi (Wang Leehom) practices the magical Yan arts. He can bring inanimate matter to life and is able to defeat a robotic creature with his own self-made companion during an exhibition fight. In the process he wins a lot of money, which he wants to use immediately during a subsequent auction to buy a ring. The ring belongs to his master Xie Yi (Archie Kao), who disappeared some time ago without a trace, and the ring could give Wuyi some information on his master's whereabouts. However, not only Wuyi is interested in the ring. The female warrior Wen Renyu (Victoria Song) as well as Xia Yize (Godfrey Gao), a swordsman of royal blood, want to challenge Wuyi for the ring. But suddenly the warriors of high priest Shen Ye (Julian Cheung) appear and the three fighters need to join forces against him. Eventually, they are saved by master Xie Yi, who takes them with him on his airship. There, they find out that the high priest wants to bring his own people, who are living in a floating city, to earth and destroy mankind. The only thing that can stop him is a magical sword which was separated into four different pieces and scattered all over the world. The ring is one part of the sword and another one is in a painting which is on board of the airship. Shen Ye is aware of the fact that the sword is the only weapon posing a threat to him. Therefore, he does everything in his power to be the first to get hold of the magical weapon. 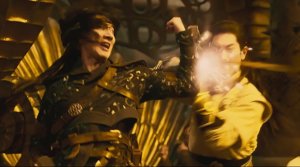 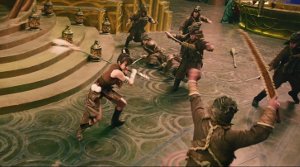 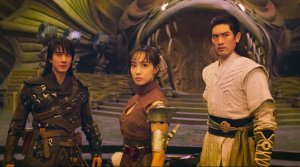 Review: It shouldn't come as a surprise to anyone that "Legend of the Ancient Sword" is ultimately exactly the kind of forgettable fantasy movie you are used to get from China. A movie, which tries to create a world full of colorful creatures and things by excessive use of CGI, but in the meantime, completely forgets about its characters, who should actually be the focus. Therefore, the flick makes it impossible for the audience to get emotionally involved in the action. The story starts out rather decent, with a student searching for his master and two other heroes whose interest in that master remains a secret at first. But then a generic villain is introduced who changes the story into a pseudo epic in which the heroes have to save the world. The action sequences, however, are mostly nice to look at and the pace is working as well. Only during the movie's last third it starts to collapse underneath the weight of all the clichés it makes use of, and the weaknesses, initially even considered somewhat likeable, start to completely destroy the film. 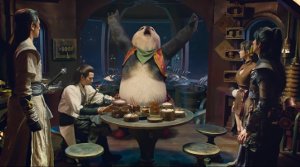 The movie is based on the Chinese MMORPG "Legend of the Ancient Sword II", and there was also a TV series in 2014 based on the game. The original idea was to shoot a movie trilogy, but after the first one flopped at the box office, grossing only 1.4 million dollars, those plans got buried. Renny Harlin, who was very successful with the international Jackie Chan movie "Skiptrace", unfortunately delivers exactly the kind of fantasy mumbojumbo which is colorful, abstruse and without any substance. However, one could point out that there are enough movies like that in China that actually were hugely successful at the box office. But maybe the Chinese audience has become a little bit pickier. But to be honest, "Legend of the Ancient Sword" partly offers more than other movies of that genre. At least, you can notice in a few scenes that behind the rather flat storyline there lies a world with a lot of details. 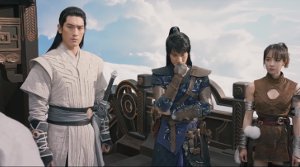 The first scene during which Wuyi enters the arena confronts us with an incredibly colorful world, which was maybe meant to appeal to children. Tigermen, elephant creatures on two legs, an octopus DJ (?) - everything seems just a little bit over the top. The CGI sometimes leaves a lot to be desired as well, but more on that later. When Wuyi fights in the arena, the positive aspects of the movie come to light. The robotic creatures give the movie a nice steampunk touch. Wood, gold, gearwheels and on top of that the creator's love breathing life into the robots, that is the magic's focus of this fantasy flick and it's rather appealing. Of course, there is also the quiet warrior who is able to create ice magic with his sword, or the female warrior whose spear can turn into a gigantic boomerang, and even if it is a little bit cheesy, those elements are pretty entertaining. The scene in which Yizi enters a painting and leaves the colorless side of it through a door and reaches an animated level of the painting, turned out especially nice. 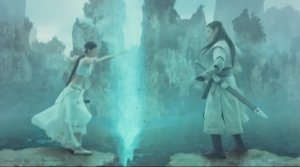 Those kinds of nice little moments, however, get completely destroyed by cheap CGI effects which are quite obvious during scenes on the airship as well as during scenes which were clearly filmed in front of greenscreen backgrounds. Also, the beasts were animated cheaply, especially the panda on the airship is incredibly annoying and most likely was added for the five-year-olds among the audience. The special effects mostly look as if the filmmakers only realized that they have to watch their budget after they had already done some rather decent CGI effects. And Renny Harlin, too, seemed to have noticed rather late that he actually needed a typical bad guy. Therefore, towards the movie's end, there is a twist, which at its core is pretty nice, but also establishes a villain who is completely generic. Nevertheless, at this point, the fantasy flick has already crossed the line from interesting to stereotypical and you start to have very little interest in the things that happen on screen. Apart from the action maybe, which at least turned out quite decent. 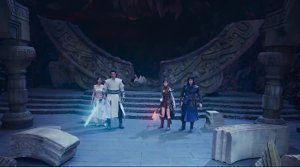 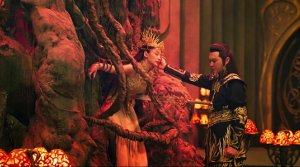 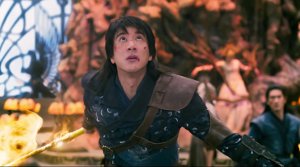 The biggest problem is the characters' one-sidedness. Wang Leehom ("Little Big Soldier") plays the goofy main hero of the story and there is not much more about the character that he could work with. The other two characters are too cold to really warm our hearts. Despite all this, thanks to all the shared experiences, the three form some sort of adventurous group which fights against evil. This is a nice touch, but it still doesn't change the fact that we are not really interested in any of the movie's characters and that the events taking place are not affecting us. The action sequences and the world are reminiscent of 80s or 90s fantasy flicks, which undoubtedly will make "Legend of the Ancient Sword" rather appealing for a more specific audience. Despite a world full of colorful stories, the end product remains inanimate, which is mainly due to the movie's characters and the picture's lackluster last third.